An Ancient Mystery: “A man or some other animal”

Tabitca Cope, the author of the excellent cryptozoological novel, Dark Ness, says of the Woodwose/Wodewose that it "...is a savage, naked man decked out in leaves and boughs or moss and ivy, carrying a huge club. He has been reportedly seen in England since 14th Century and up to the 16th Century and has been described as a large bearded man whose entire body was covered in curly hair. Historians theorized that the wodewose may have been some ancestor of man, and during the periods of its existence, had learned to fashion tools from wood. Similar stories of large hairy ape-men are found in the Pacific Northwest, Europe, Canada, Mexico, Belize, Guiana, Ecuador, Brazil, Malaysia, Indonesia, parts of Africa, and of course the Himalayas."

Unlike the classic Bigfoot of the Pacific northwest regions of the United States, or the Abominable Snowman of the frozen Himalayas, the Woodwose was – despite its oft-reported abundance of body hair - far more human-like in its appearance and nature; something that has led to deep speculation that the legends of such creatures might very well have had their origins in sightings of so-called feral people: human-beings who, either by choice or unfortunate circumstances, lived solitary lives, deep in the heart of the woods and, as a by-product, descended into states of definitive savagery. Then there is the astounding theory that, possibly, the tales of the Woodwose were born out of occasional sightings of pockets of ancient humans, such as Neanderthals, or people of the Neolithic era, who, rather incredibly, may have survived long after conventional wisdom and science tells us they became utterly extinct or absorbed.

Added to that, there was a widespread belief across much of Europe centuries ago that if a man or a woman decided to live among the beasts in dense and foreboding forests and woodland, he or she would inevitably become more and more animalistic as time passed by. Eventually, it was accepted, they would become wild people in the literal sense of the term: Nothing less than fully-fledged, hair-covered beasts of the trees. The well-known Cornwall-based anomalies researcher and author, Elizabeth Randall, has spent many a moon seeking out the truth behind the Woodwose legends and says of the creature that it "...is usually shown as a complete, part human, figure carrying a club with the limbs being leafy. It also often shows a thick beard and wears a cap. The Woodwose may also be shown holding the club in different positions. Sometimes this is on its side and sometimes it is raised. There is a theory that a raised club depicts the figure before it was converted to Christianity, but it’s probably more correct to believe that it was raised to ward off evil spirits." 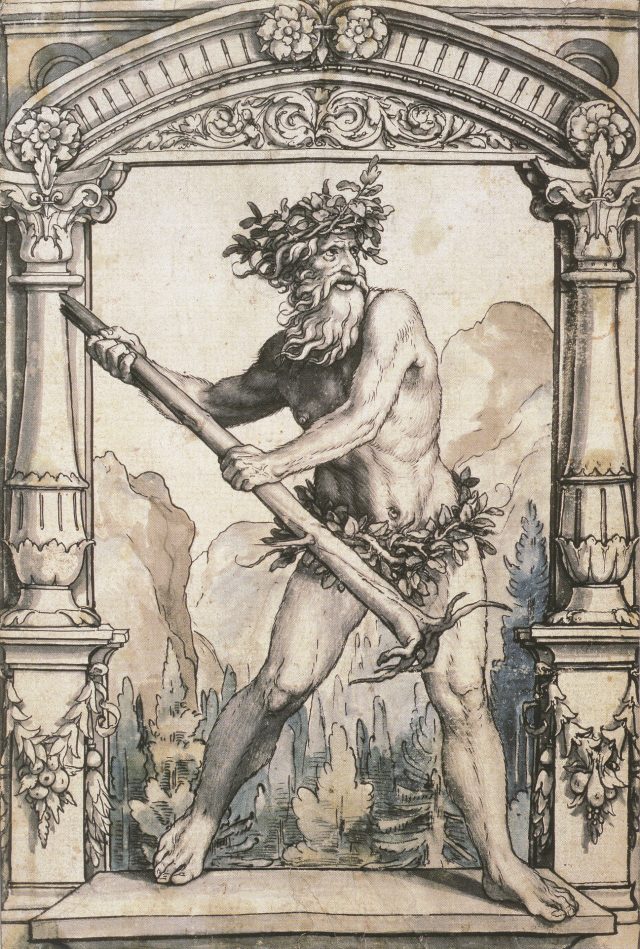 A memorable description of a Woodwose can be found within the pages of Konungs skuggsjá (or The King’s Mirror), which was written in Norway at some point around 1250: "It once happened in that country (and this seems indeed strange) that a living creature was caught in the forest as to which no one could say definitely whether it was a man or some other animal; for no one could get a word from it or be sure that it understood human speech. It had the human shape, however, in every detail, both as to hands and face and feet; but the entire body was covered with hair as the beasts are, and down the back it had a long coarse mane like that of a horse, which fell to both sides and trailed along the ground when the creature stooped in walking."

Returning to Elizabeth Randall, she also notes that it wasn’t until the early medieval period that wild men were thought of as being truly human beings, but ones that had been driven wild due to madness. At this particular same time, she comments, "...Celtic tales attribute poetic, or prophetic, powers to wild men. In Welsh tradition, especially, such powers are given to Myrddi, (a.k.a. Merlin), who at one point becomes mad and goes into a forest where he finds himself able to write prophetic poetry. Medieval literature, and art, is full of wild men stories and icons and, whilst mostly portrayed as being mainly human, they are sometimes shown as crawling on all fours and attacking dogs. Rather than being the true Wild Man of the Woods, who lives a feral life, it is possible that the Woodwose falls into the category of a strange being that manifests itself into reality from time to time. If that is true then it may account for the occasional reports that still surface today."