In the annals of UFO sightings throughout history there have been many that stand out as truly incredible, even sometimes including purported military engagements between UFOs and human beings. This may seem pretty spectacular as it is, like something out of a science fiction movie, but what if we take it a step further? What happens when these enigmatic objects actually engage each other? While it seems to be a subject well off the beaten path, there are actually a few cases of UFO on UFO dogfights going way back.

The earliest case we will look at here, and probably the most flat out spectacular and bonkers, is an odd phenomenon that purportedly played out in the skies over Nuremberg, Germany, in 1561. On April 14th of that year, normal life ground to a halt as citizens looked upwards with a mixture of awe and fear as something very strange happened up there. There whizzing about in the heavens were reportedly hundreds of mysterious objects of all shapes and sizes, including spheres, cylinders, tubes, saucer-like objects, crosses, ovals, lunar crescents, a black spear, and myriad others, which seemed to be engaged in some sort of free-for-all aerial battle, scorching the sky with their hostilities, after which one of them was said to actually crash somewhere out in the wilderness. The objects moved erratically and with great speed, and an article that appeared in the local paper at the time, said of this bizarre scene:

At first there appeared in the middle of the sun two blood-red semi-circular arcs, just like the moon in its last quarter. And in the sun, above and below and on both sides, the color was blood, there stood a round ball of partly dull, partly black ferrous color. Likewise there stood on both sides and as a torus about the sun such blood-red ones and other balls in large number, about three in a line and four in a square, also some alone. In between these globes there were visible a few blood-red crosses, between which there were blood-red strips, becoming thicker to the rear and in the front malleable like the rods of reed-grass, which were intermingled, among them two big rods, one on the right, the other to the left, and within the small and big rods there were three, also four and more globes.

These all started to fight among themselves, so that the globes, which were first in the sun, flew out to the ones standing on both sides, thereafter, the globes standing outside the sun, in the small and large rods, flew into the sun. Besides the globes flew back and forth among themselves and fought vehemently with each other for over an hour. And when the conflict in and again out of the sun was most intense, they became fatigued to such an extent that they all, as said above, fell from the sun down upon the earth 'as if they all burned' and they then wasted away on the earth with immense smoke. After all this there was something like a black spear, very long and thick, sighted; the shaft pointed to the east, the point pointed west. Whatever such signs mean, God alone knows. 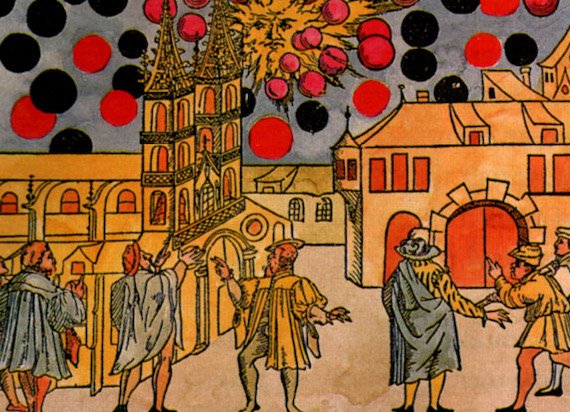 The whole thing apparently lasted for a full hour, after which all of these various objects apparently flew off towards the sun. The article was accompanied by a woodblock print depicting the battle, which was also brought into modern discourse when it was published in Carl Jung's 1958 book Flying Saucers: A Modern Myth of Things Seen in the Skies, and it has left people scratching their heads ever since. At the time of the article it was largely seen as some sort of celestial battle and a sign from God, but of course in that era flying spaceships would not have really been a thing since it was an age when we didn’t even understand the cosmos in the first place, let alone flying machines. It only makes sense they would try to explain it in a religious context, with something they could understand. In later centuries it has come to be seen as perhaps some sort of atmospheric phenomena such as a sundog, flying swarms of insects, clouds, birds, a sensationalized tall tale, or even an actual mass battle between UFOs. It is likely we will never know, considering how lost to time the report is, but it is definitely curious.

A very similar series of events allegedly occurred in April of 1665 in the skies over Barhöfft, which was then in Sweden, but is now in Germany. On this occasion there were supposedly seen several disc-shaped objects that were battling amongst themselves, after which they scattered and one remained hovering there, which apparently made all those who looked upon it sick. One Erasmus Francisci would write of this in a 1689 article entitled Der wunder-reiche Ueberzug unserer Nider-Welt/Oder Erd-umgebende, in which he says of the battle aftermath:

After a while out of the sky came a flat round form, like a plate, looking like the big hat of a man… Its color was that of the darkening moon, and it hovered right over the Church of St. Nicolai. There it remained stationary until the evening. The fishermen, worried to death, didn’t want to look further at the spectacle and buried their faces in their hands. On the following days, they fell sick with trembling all over and pain in head and limbs. Many scholarly people thought a lot about that. 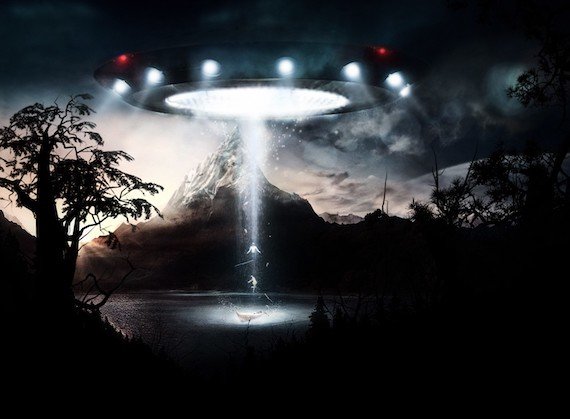 As with the Nuremburg case, this has been speculated as being mirages, birds, or some other mundane phenomena, but the detail of the fishermen falling sick is intriguing, and makes one wonder if this could have been an effect of radiation sickness in an era when we didn’t even know what radiation was. What was going on here? There have been much more modern reports of this sort of battle between UFOs happening, such as one incident that reportedly happened in February of 1980 in Australia. On this day brothers Rob and Phil Tindale were at their home in the town of Aldgate when they spied what seemed to be a brightly lit yellow object “bobbing about” in the sky above. After several minutes another similar object then joined it, only this one was larger and emitted a red light towards the smaller object.

According to the brothers, the larger object would move up to the smaller one, stop, shoot its red light, back up and then repeat the process, which gave them the impression that it was an attack of some sort. The smaller object then took off and the two engaged in a breathtaking display of speed and aerial maneuverability, an obvious chase, before both of them sped off in opposite directions. One of the brothers would say, “Certainly there were two lights, one appeared to be chasing the other, they both dipped below the horizon. It was a very memorable thing.” Both of the brothers remain adamant that they actually witnessed two UFOs dogfighting each other, and there was even another witness, a local farmer named Daryl Browne, who reported seeing a "speedboat-shaped yellow thing" crash through some trees leaving a mess of broken branches behind. One wonders just what happened here.

Even more recently is an account covered on UFO Casebook and from Unsolved UFO Mysteries by William J. Birnes, and Harold Burt. Supposedly this report comes from the Russian UFO researcher Nikolay Subbotin, and took place in 1989 over Zaostrovka, Russia. Apparently, on September 16, 1989, several hundred witnesses observed a formation of six silvery saucer-shaped UFOs chase a larger, golden one, apparently attacking it in the process. During the confrontation, all of the craft exhibited acceleration and maneuverability far beyond anything known, and all were described as shooting strong beams of flickering intense light at each other. According to a report in the newspaper Semipalatinsk, the energy being thrown about by these UFOs was enough to cripple the power grid and send the whole town into darkness. 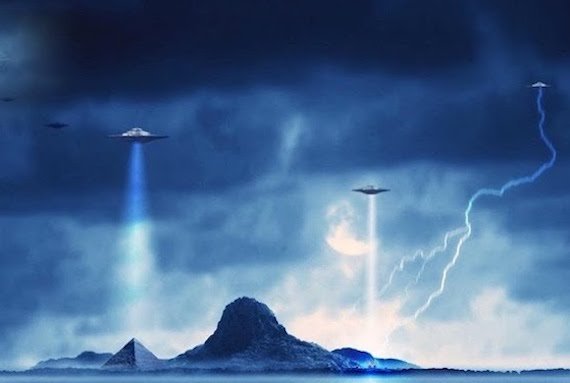 Making this report all the more sensational is that after some time of the silver saucers ganging up on seventh object, the golden one then seems to have succumbed to the many energy beam hits it was sustaining, losing altitude to go hurtling towards the ground off in the distance, purportedly coming down at a bog on a nearby military test range. As soon as this happened, the victorious silver objects then reportedly shot off into the distance, and although the first reaction of the witnesses was to see if the other had crashed, it was a military area off limits to civilians. According to Subbotin, the military wasted no time in moving in shortly after the crash, and cleared the area, during which time several personnel fell mysterious ill and the instruments of passing aircraft experienced interference. What happened to this alleged downed UFO, if it ever really existed at all? Why were those other UFOs attacking it? Who knows?

These are certainly some very surreal and off-kilter accounts, in that rather than human fighter jets engaging these unidentified flying objects they seem to have been engaging each other. It is all pretty wild to think about, these advanced craft testing their meddle with each other in battle, and if it is real one is left to wonder why they would do this. Are there differing factions of these beings that on occasion don't see eye to eye? Are there enemies among the occupants of these craft, who for whatever reasons resort to battle? Or is it just that these are misidentified phenomena that give the illusion of such bizarre dogfights? Such cases surely are some pretty far-out stuff, and whether they are real or not they certainly stoke the fires of the imagination.