Any discussion of dimming stars and most discussions of space travel and advanced civilizations include the name of one theoretical physicist and an extremely difficult yet seemingly possible structure that could provide endless star power for both. Yet Freeman Dyson, who passed away on February 28, 2020, at the age of 96, should be remembered for more than just the Dyson sphere.

Born on December 15, 1923, in Berkshire, England, Freeman John Dyson showed an early interest in large numbers (his sister remembered four-year-old Freeman trying to calculate the number of atoms in the sun) and, after winning a scholarship to college at age 15, helped the British war effort by developing analytical methods for calculating the ideal density for RAF bomber formations. After the war, Freeman returned to obtain a degree in mathematics and began publishing papers that his friend, neurologist and author Oliver Sacks, said showed signs of his future radical ideas:

“A favorite word of Freeman's about doing science and being creative is the word 'subversive'. He feels it's rather important not only to be not orthodox, but to be subversive, and he's done that all his life."

In 1947, Dyson moved to the United States and made friends with Richard Feynman, another brilliant yet radical thinker. In 1949, Dyson wrote a paper that explained how light interacts with matter to produce all phenomena – the theory of quantum electrodynamics (QED). At the time, many deemed the paper worthy of a Nobel prize – an award that somehow eluded Dyson throughout his lifetime of equally worthy new ideas that caused many to call him “Dr. Dyson” even though he had no Ph.D.

Leaving the field of teaching, Dyson became a scholar and tackled many of science’s most perplexing and challenging practical and theoretical problems. He helped develop the Triga reactor, a nuclear reactor that didn’t need a containment building, allowing universities and labs to use in for nuclear medicine research. Dyson was a part of Project Orion, a plan to explore the solar system with a spaceship powered by nuclear explosion – a program that was abolished by the Limited Nuclear Test Ban Treaty of 1963.

When that door closed, Dyson began to think even bigger and published a paper ("Search for Artificial Stellar Sources of Infrared Radiation") in 1960 describing what became known as the Dyson sphere – an artificial structure surrounding a star built by an advanced civilization to harvest solar energy. While the technology to build such a power plant far exceeded the capabilities of humans, Dyson saw this as something for astronomers to look for in identifying stars with intelligent life forms. In 2015, astronomer Tabetha “Tabby” Boyajian discovered KIC 8462852, a star with irregular light fluctuations that some have theorized could be caused by it being surrounded by a Dyson sphere. While other theories are more plausible, the link between Tabby’s Star and the Dyson sphere has persisted.

Meanwhile, Freeman Dyson had moved on to other ideas that bear his name. He proposed the Dyson tree, a genetically engineered plant capable of growing its own greenhouse that would allow it to live and thrive on a comet. Then there’s the Dyson Scenario in which another advanced civilization achieves immortality by extending time to infinity while expending only a finite amount of energy. Dyson was also a mathematician – Dyson’s Transform is a technique used in additive number theory to prove things like the Goldbach conjecture that every even integer is the sum of at most 6 primes. (Really!) Linking together his friend Richard Feynman’s famous Feynman diagrams with quantum electrodynamics, he developed the Dyson series, the “formal solution of an explicitly time-dependent Schrödinger equation by iteration” (see a detailed scientific explanation here). 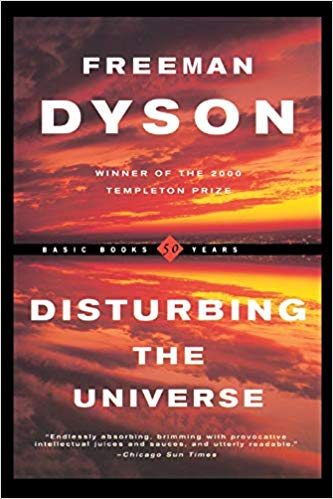 And of course, there was this writer’s favorite Dyson creation – the Astrochicken. A thought experiment based on an idea by John von Neumann, the Astrochicken (described in his book, "Disturbing the Universe") would be a small, one-kilogram (2.2 lb) self-replicating spacecraft launched as an egg that “hatched” and grew using solar power and material harvested from space object. It would then lay its own eggs, replicating the process ad infinitum – allowing humanity to explore space far beyond the time restraints of a human lifetime and human needs.

For a more detailed look at Freeman Dyson’s life and his ideas, read his obituary here and visit his official website.

While Freeman Dyson has left the planet, his name and ideas have achieved both Dyson Scenario and Astrochicken immortality ... who needs a Nobel prize?