NASA is busy recruiting astronauts for future missions to the ISS, the Moon and Mars, but a new discovery may shove a few humans off of the Martian ships to make room for pigs. Specifically, those hogs trained in the art of truffle-sniffing. The Curiosity Rover recently found organic compounds on the Martian surface that resemble those in coal, crude oil and white truffles. Will Elon Musk add a pen to his Mars ship or will pigs fly First Class?

"If you find thiophenes on Earth, then you would think they are biological, but on Mars, of course, the bar to prove that has to be quite a bit higher."

In a press statement by Washington State University announcing the publication of a new paper on the subject in the journal Astrobiology, WSU astrobiologist Dirk Schulze-Makuch describes the discovery by Curiosity of thiophenes – compounds with the formula C4H4S (four carbon, four hydrogen and one sulfur atom) which can either be biotic or abiotic. They are found on Earth in kerogen (solid, insoluble organic matter), coal, crude oil, as well as in fossilized stromatolites (single-celled cyanobacteria) and other microfossils. And in white truffles (Tuber magnatum) or trifola d'Alba Madonna ("Truffle of the White Madonna" in Italian), the most expensive edible fungus in the world. (The highest price paid for a single white truffle is $330,000 for one weighing 1.5 kilograms (3.3 lb.))

“In the biological scenario, bacteria, which may have existed more than three billion years ago when Mars was warmer and wetter, could have facilitated a sulfate reduction process that results in thiophenes.”

The press release points out that thiophenes can be formed by thermochemical sulfate reduction (heating compounds to 248 degrees Fahrenheit (120 degrees C) until they break down, or may have been brought to Mars by meteorites. Since there’s no fun or glory in finding those, the biological sources are the ones Schulze-Makuch and co-author Jacob Heinz (from the Technische Universität in Berlin) want the next rover to search for.

The Rosalind Franklin Rover -- named for an English chemist and X-ray crystallographer whose work was central to the understanding of the molecular structures of DNA, RNA, viruses (we could use her now!), coal, and graphite – will be launched in July 2020 with a Mars Organic Molecule Analyzer to collect larger molecules than Curiosity can. In particular, they want it to search for light isotopes that are "a telltale signal for life."

What about the truffle-sniffing pigs? 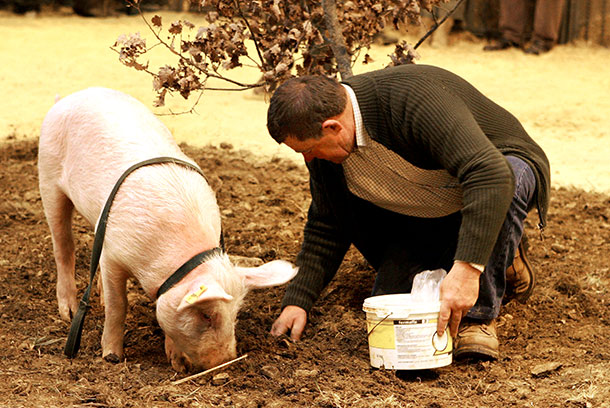 "I think the proof will really require that we actually send people there, and an astronaut looks through a microscope and sees a moving microbe."

Schulze-Makuch isn’t big on that idea just yet. Besides, how will they be able to sniff and root while wearing a space suit? And who would want to try to get a pig into a spacesuit in the first place?

UFOs of the Invisible Kind?