Mysteries of the Haunted Melrose Abbey

Histrorical places are often wreathed in impenetrable mysteries. Once considered to be one of Scotland’s most majestic and beautiful buildings, Melrose Abbey has a long and colorful history. First built between 1136 and 1146 by Cistercian monks at the behest of King David I, the Gothic structure would then be added onto for over 50 more years, becoming a sprawling complex laid out in the shape of a St John's cross, known for its beauty, stained glass windows, and its numerous intricately carved decorative details of saints, dragons, gargoyles, animals and plants. The abbey would be largely destroyed in attacks by Edward II’s army in 1322 and also by Richard II in 1385, but it would be slowly rebuilt to its former glory over the ensuing century, with King Robert the Bruce being a major force behind its reconstruction, however, the site and the surrounding town of Melrose would be subjected to numerous English attacks over the ages, and much of it remains in ruins to this day. With such a long history it is perhaps no surprise that Melrose Abbey should have its share of mysteries and hauntings, and have them it does.

One of the mysteries of Melrose Abbey revolves around Robert I, commonly called Robert the Bruce, who was King of Scotland from 1306 until his death in 1329. Before his death he supposedly made the decree that his heart be taken into battle, after which it be embalmed and then buried under the abbey. His wish was fulfilled and although his body was buried at Dunfermline Abbey, it is said that the monks dutifully buried his hear where he had requested. It is unknown if this is actually true, but it is known that a small metal plaque leaden container containing a heart was excavated at the abbey in 1996, and it is though that this is that of Robert the Bruce, as there are no records of any other heart having been buried there. Incidentally, the ghost of Robert the Bruce is said to haunt the abbey to this day.

Another strange story circling Melrose abbey concerns Michael Scott, the great Scottish philosopher, medieval scholar, and supposedly also an actual sorcerer, often called “The Wizard of the North.” Not much is known about Scott’s earlier life, but he was likely born in 1175 and educated at Oxford and Paris, heavily studying theology and philosophy, but where he really made a name and legend for himself was with his study of the occult. Upon earning his doctorate in theology, Scott embarked on a great adventure around Europe, and it was during this time that he sought to become a sort of monastic scholar, and he found himself at Toledo university, where he translated Arabic and Latin, and where he also is said to have begun his serious journey into the arcane arts.

Although very little is known about the true extent of Scott’s sorcery and occult practices, he certainly accrued plenty of legends in his time, and was said to be a skilled alchemist, astrologer, and sorcerer, credited with having all manner of magical abilities such as levitation, healing, seeing the future, flight, turning copper into gold, and even the power to turn people into stone. Some of these supposed powers were enough to get him accused of heresy by the Catholic Church, and whether he could do any of these things or not, he certainly did nothing to deny them, and indeed did much to fan his own legend. It is said that Scott even predicted his own death, taking to wearing a metal helmet after seeing a vision of meeting his doom from a falling stone. The story goes that one day at church in 1236 he removed this helmet just for a moment and was struck down by a piece of masonry that plummeted down from above, just as he had predicted. The popular story is that he was buried somewhere in Melrose Abbey along with a collection of powerful magical texts and spell books. Whether this is true or not, Scott’s ghost has been said to prowl the abbey ever since, and it adds another layer of mystery to this place.

Probably one of the wilder and more sinister stories of Melrose abbey is that there is an actual vampire who once prowled these grounds, and perhaps still does. The Augustinian Canon William Parvus, also known as William of Newburgh (1136-1198), wrote that there was a priest who had ignored his holy duties and had fallen into sin and vanity, and his avid love of hunting on horseback with a pack of dogs led to him being called the “Hundeprest,” meaning the “dog-priest.” When this man died he was apparently entombed at Melrose abbey, but it is said that his evil ways in life had turned him into a revenant who took to rising at night and wandering the countryside looking for victims and drinking their blood, as well as terrorizing the nearby nunnery and haunting his ex-mistress. The monks of the abbey then decided to do away with this scourge, and set up an armed watch at the Hundeprest’s tomb one evening to lie in wait for the fiend. William of Newburgh wrote of what happened next:

These four, therefore, furnished with arms and animated with courage, passed the night in that place, safe in the assistance which each afforded to the other. Midnight had now passed by, and no monster appeared; upon which it came to pass that three of the party, leaving him only who had sought their company on the spot, departed into the nearest house, for the purpose, as they averred, of warming themselves, for the night was cold. As soon as this man was left alone in this place, the devil, imagining that he had found the right moment for breaking his courage, incontinently roused up his own chosen vessel, who appeared to have reposed longer than usual. Having beheld this from afar, he grew stiff with terror by reason of his being alone; but soon recovering his courage, and no place of refuge being at hand, he valiantly withstood the onset of the fiend, who came rushing upon him with a terrible noise, and he struck the axe which he wielded in his hand deep into his body. 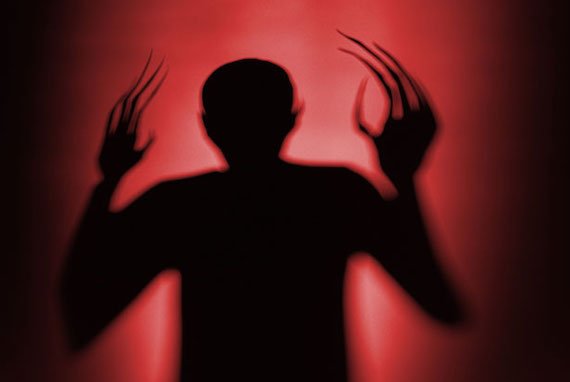 On receiving this wound, the monster groaned aloud, and turning his back, fled with a rapidity not at all interior to that with which he had advanced, while the admirable man urged his flying foe from behind, and compelled him to seek his own tomb again; which opening of its own accord, and receiving its guest from the advance of the pursuer, immediately appeared to close again with the same facility. In the meantime, they who, impatient of the coldness of the night, had retreated to the fire ran up, though somewhat too late, and, having heard what had happened, rendered needful assistance in digging up and removing from the midst of the tomb the accursed corpse at the earliest dawn. When they had divested it of the clay cast forth with it, they found the huge wound it had received, and a great quantity of gore which had flowed from it in the sepulchre; and so having carried it away beyond the walls of the monastery and burnt it, they scattered the ashes to the winds.”

It is all rather spectacular, but is presented as an actual account rather than a piece of lore, so it is hard to know what was going on here. Whether the supposed vampire ever existed or not, in later years and all the way up into the present there are tales that the vampire priest was not truly slain, and that he still haunts the abbey, seen as a dark, cloaked figure lurking amongst the ruins. And there have been many ghosts reported from these ruins since then. What is it about this place that attracts such stories? Why is it that it should harbor such weirdness? Is it the long history and the unsolved mysteries surrounding it? Or is it something else? In the end Melrose Abbey is a scenic site that has intriguing mysteries it may never divulge.

Oldest Ancestor of All Living Creatures Discovered in Australia