“Mysterious Bubbles of Nothing” sounds like a great name for a progressive rock album or an apt description of most political campaign speeches, but it’s actually from a headline announcing a new study of a phenomenon consisting of nothing suddenly appearing and eating all space and time around it until it consumes the universe … unless another one does it first. Will this push the coronavirus out of the news?

“We study non-perturbative instabilities of AdS spacetime in General Relativity with a cosmological constant in arbitrary dimensions. In this simple setup we explicitly construct a class of gravitational instantons generalizing Witten’s bubble of nothing. We calculate the corresponding Euclidean action and show that its change is finite. The expansion of these bubbles is described by a lower-dimensional de Sitter geometry within a non-compact foliation of the background spacetime. Moreover we discuss the existence of covariantly constant spinors as a possible topological obstruction for such decays to occur.”

That sounds much more scientific and well beyond most paygrades of understanding. Fortunately, Vice does an excellent job of condensing “Nothing really matters” – the actual title of a scientific paper submitted to the Journal of High-Energy Physics – into bubbles of words we can understand. Physicists Giuseppe Dibitettoa, Nicol`o Petria and Marjorie Schillob of the Department of Physics at the University of Oviedo in Spain don’t task themselves with explaining the process of spacetime decay – one type of nothing bubble – as much as helping us learn to love them … or at least use them to better understand string theory and its connection to space and time.

In a nutshell of Vice’s nutshell, most of the universe is a vacuum and that’s what keeps it stable. In quantum field theory, a stable vacuum is the lowest possible energy state and it’s a state that all other forms eventually decay into, including unstable or false vacuums. A spacetime bubble is an area which has different energy properties inside and outside its ‘bubble’ boundary, so a ‘bubble of nothing’, according to co-author Marjorie Schillob, is one with nothing inside.

So far, so good … until a bubble of nothing appears inside a false vacuum. In that case, the bubble of nothing would expand inside the false vacuum and keep it from decaying into a stable vacuum, thus destroying the universe. The paper looks at why these bubbles of nothing may be occurring and what, if anything, could be done to stop them. That, according to Schillob, depends on string theory, which puts the universe into four known dimensions – the spacetime combo of three spatial dimensions plus the time dimension, and other dimensions too small to be detected other than mathematically. 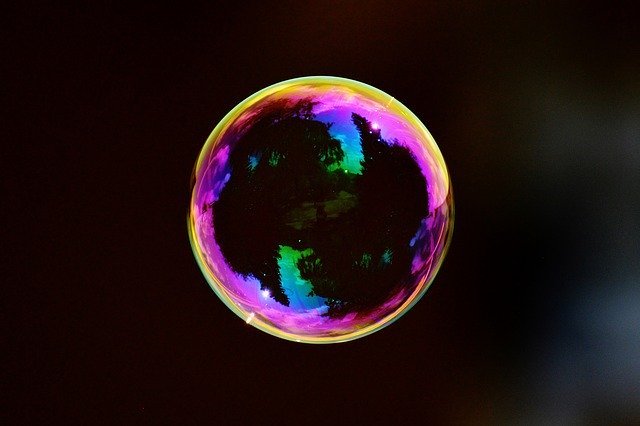 Here comes what saves us from the mysterious bubbles of nothing -- they won’t form in four dimensional spacetime, but they will form in the tiny multidimensions’ spacetime. In models based on this type of spacetime, the probability of a bubble of nothing destroying the universe is a virtual certainty in an infinite volume of space – whose existence physicists debate. While that still sounds pretty bad, Marjorie Schillob thinks it’s pretty cool and would love to actually ride on the outside of a universe-chomping bubble of nothing because she theorizes that it would look something like the birth and initial expansion of the universe.

“It would be interesting to work out under what conditions an observer could 'ride' on the bubble of nothing and see a universe that is similar to the one we live in. Because the bubble expands, such an observer would see an expanding universe, and this could explain the observed dark energy.”

You’ve got to love those theoretical physicists and their dreams. In the meantime, it sounds like we’re safe from the mysterious bubbles of nothing for a while. Kudos to Carly Minsky at Vice for condensing this complicated paper and theory into something understandable to someone who was more excited to have a potential new name for a prog-rock album.

Roswell and Majestic 12: No Aliens