NASA Debunks an “Ezekiel’s Wheel” UFO — Is It Hiding Something?

There is probably no book of the Bible that annoys NASA more than the Book of Ezekiel. That’s the one with the flying chariot with a "wheel within a wheel" that has come to be known as Ezekiel’s wheel. This is the book which is stuck like glue to Erich von Däniken and the theory of ancient aliens – both of which inspired NASA engineer Josef F. Blumrich to write “The Spaceships of Ezekiel” while still employed by the agency, thus linking NASA to Ezekiel and his wheel – which Blumrich attempted to duplicate with his patented "Omnidirectional wheel.” Fans of ufology know that it’s a rare occasion when NASA acknowledges, let a lone addresses, a UFO sighting, yet that was the case this week when it gave an official explanation for a UFO which was being described as a – you guessed it – Ezekiel’s wheel. Was NASA just annoyed … or is it trying to hide something about this particular UFO? 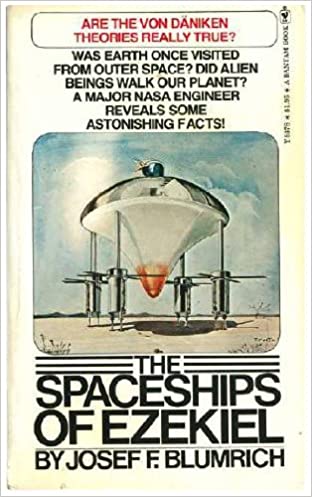 That’s the headline describing a video uploaded to YouTube by The Hidden Underbelly 2.0, who credits a “Vasco Fernandes” for spotting it on a video from the A camera of the STEREO Solar Terrestrial Relations Observatory (STEREO) pair. (Watch the video here.) These satellite were launched in 2006 and positioned ahead of and behind Earth in the same orbit to give stereoscopic images of the Sun and solar phenomena … and UFOs? Contact was lost with STEREO B in 2014 but STEREO A continues to broadcast … except when it’s interrupted by … NASA? That’s the assumption in the video’s narration, which highlights the appearance of the so-called “Ezekiel’s wheel” for a few seconds before the video cuts out. When it returns, the anomaly is gone and the narrator says:

“NASA’s gonna have to have some explaining for this.”

“Some people have noticed an odd shape, sort of a cross inside a circle, entering the field-of-view of the HI2 telescope on STEREO Ahead around February 20,2020. Eventually there is a cone shape that appears next to it. You can see the feature in question in this movie moving from right-to-left, just below the trapezoidal occulter on the right side of the image.

The answer lies on the exact opposite side of the image. At the same time as this strange-looking feature starts being visible, the very bright planet Venus enters the HI2-A field-of-view from the left. Notice that Venus and the feature stay in step almost exactly opposite each other across the middle of the detector. This is not a coincidence. The strange looking geometrical "object" is actually an internal reflection of the planet Venus within the telescope optics. This effect has been seen many times before.”

Well, that explains it for everyone except the true believers in Ezekiel’s wheel – it’s Venus being reflected inside the telescope. It should make sense to anyone who knows a little about cameras (remember those?), lenses and optics. However, rather than leaving it at that, NASA sees it necessary to bring up something else.

“We have also gotten some questions about why the images from the most recent few days are of lower quality and are sometimes incomplete. This is because our data comes in two streams â€“ highly compressed and lower quality but fast space weather beacon data, which are replaced after a few days with better science-quality images.”
(â€“ is NASA’s weird character stream.)

Hmm. Why would NASA, so historically unwilling to address any sort of unusual space anomalies, bring one up on its own? For those who watch these video feeds for such anomalies or just out of scientific curiosity, the fact that NASA actually has two visual feeds of the same area must be puzzling. And why has it suddenly switched to what it admits is a lower quality feed right after the so-called “Ezekiel’s wheel” appeared? Is there something to hide?

Sorry, NASA, that annoying Ezekiel’s wheel is not going away and neither are the dedicated watchers who wonder what you’re up to.

A Frightening Demonic Haunting in Wales