New Discoveries About an Ancient and Deadly Mesoamerican Ballgame

Sports. They’re essential to health and fitness, a welcome distraction in times of stress and a sign of human evolution from the killing competition of war to the friendly competition of games with former enemies that mimicked battle without the deadly consequences. There’s evidence that ancient China had sports as long ago as 2000 BC and the birth of modern sports dates back to ancient Greece and the Olympics.

While many sports use inflated balls that trace back to kicking or throwing inflated animal bladders, a game involving a hard rubber ball predates them all because rubber was only grown in Mexico and central America. That game carries the generic name “ballgame” and most people know about it because artwork shows the games were played in the nude and the losers may have been sacrificed – depictions used by European invaders to depict Mesoamericans ad brutal savages to be conquered and educated. As always, the uncovering of new evidence changes things and newly-discovered archeological finds show that Mesoamericans were playing their ballgames as early as 1443 BCE and the game itself was more ‘hip’ that once thought.

“We challenge the lowland paradigm by providing evidence that the earliest highland ballcourt dates to the Early Formative, nearly a millennium earlier than any previous highland architectural data and just over two centuries after the Paso de la Amada court. We contribute two types of ballgame data recently excavated at Etlatongo: remains of two formal superimposed architectural ballcourts and associated ballplayer ceramic figurines.”

A new study published in the journal Science Advances challenges the idea that organized ballgames with rubber balls were developed and played almost exclusively in coastal and lowland areas of Mexico and Central America. Excavations done from 2015 to 2017 by the Formative Etlatongo Project (FEP) in the Nochixtlán Valley of the Mixteca Alta, Oaxaca, Mexico, uncovered a ballcourt dating to 1374 BCE – just 200 years after the oldest known coastal court and centuries before other highland courts.

Even more interesting, figurines of players showed them wearing thick protective belts around their hips, which means they were playing a rare form of ballgame where competitors moved the ball forward and around by bouncing it off of their hips, with walls around the court allowing for bounces and rebounds similar to today’s hockey. The courts were long and narrow, which might make the game resemble a ‘hip’ version of handball.

Finally, there were none of the famous rings or hoops attached to the wall as targets or goals, which indicates this ballgame may have resembled volleyball, with players trying to get their opponents to miss in order to score. This indicates to the researchers that this was an early game in the process of transformation, just like the Mesoamerican society at the time, when warring leaders switched to trade and cooperation between regions and saw the sport as a great way to show power as well as teamwork and friendly competition. 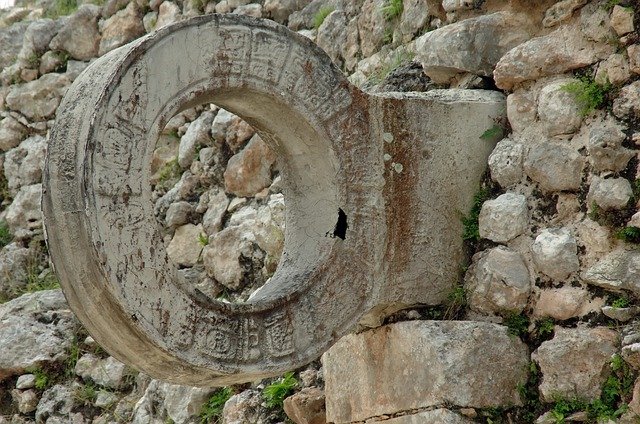 Yeah, yeah, yeah … what about the human sacrifices?

Ah, yes ... the part we all remember from history class. Figurines discovered at lowland game sites show players standing over captive opponents, leading to speculation that some sort of victory torture was involved in ballgame. With the known propensity for human sacrifice in other aspects Mesoamerican life, it was probably easy to connect the dots and imply this was an act of beheading and perhaps some games were continued with human heads for balls. No evidence has been found of ballgame-related human sacrifice or blood-spilling at Etlatongo, so it appears the practice evolved later as the game became more symbolic of war, fertility, religion and struggles with the underworld.

As a result of this discovery, archeologists expect to find more ballcourts in the Mexican highlands, which give more insight into life in pre-Columbian Mesoamerica, just like sports reflects real life today.

A Strange Case of Shape-Shifting?