Taking a Look at the “Green Man” Phenomenon

Elizabeth Randall is a good friend of mine and someone who has deep knowledge of a phenomenon known as "the Green Man." It's a wild, Pagan, character linked with places perceived as magical, such as woods, glades, and streams, and whose very image provokes thoughts of ancient, proto-humans roaming the land. Liz says that: “Usually these figures are male, although there are a very few Green Women, together with green cats, green demons, and green lions. The Green Man can appear in different forms, although there are three types that are normally represented. These are the Disgorging Head, which emits foliage from the mouth; the Foliate Head: which is entirely covered in green leaves; [and] the Bloodsucker Head, which has foliage emerging from all the facial outlets.”

As for the point of origin for the phenomenon, Liz suggests that the Green Man quite possibly surfaced out of the mythology of fantastic deities and mighty gods in very early times. Perhaps, in the British Isles, she muses, the Green Man arose from the Celtic god of light, Lud (also referred to as Lug or Lyg). On a similar track, in 1942, at West Row, Suffolk, a silver salver which dated from the 4th Century was found and, today, comprises an integral and important part of what has become known as the  Mildenhall Treasure. The salver in question, which was uncovered at the site of an old Roman villa, and that is now on display at the British Museum, contains an intriguing image. It resembles a partly leafy mask thought to represent Neptune – the Roman god of the sea and the water - with the foliage being seaweed. But, pretty much for all intents and purposes, it is definitively Green Man-like in its appearance. 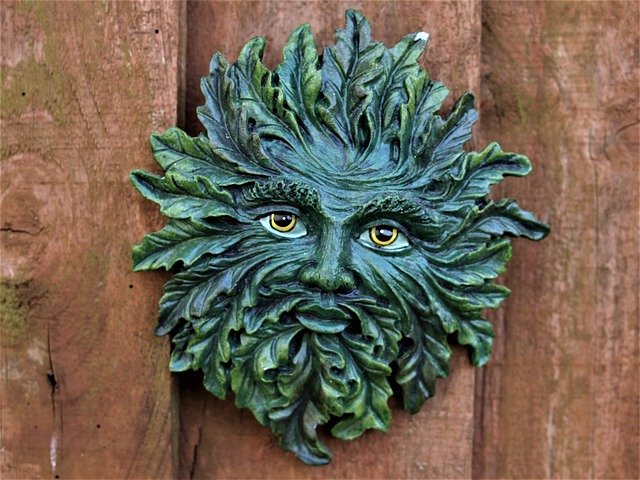 Liz has far more to say, too, of a nature that provides us with a solid body of data and history on the mysterious figure. She notes that carved depictions of the Green Man can be found not only in churches but also in secular buildings. Plus, it is a common name for a public house, where it would appear on inn signs that, occasionally, show a full figure instead of simply a head. The motif can be found right across the world and is, more often than not, related to natural vegetative divinities from throughout the ages. It is first and foremost a symbol of rebirth that represents the spring cycle of growth. From Asia to Europe there are representations of the image. From the 2nd Century to the modern day the Green Man can be associated with similar beliefs.

It may surprise some to learn that while the Green Man – as a specific entity of traditional British folklore, at least - certainly has ancient origins, the usage of those two combined words (Green and Man, in the particular context they appear in this book to explain the nature of the phenomenon), is most certainly not old in the slightest. The first person to use the term Green Man was Lady Raglan, the wife of Major FitzRoy Richard Somerset, 4th Baron Raglan. At one time he was the President of the Folklore Society. And, in 1939 his wife, Lady Raglan, created the phrase Green Man in her one and only article that appeared in the Folklore journal. She invented the term to define the leaf-decorated heads seen in English churches, and to this day her theory concerning where they come from is still discussed.’ 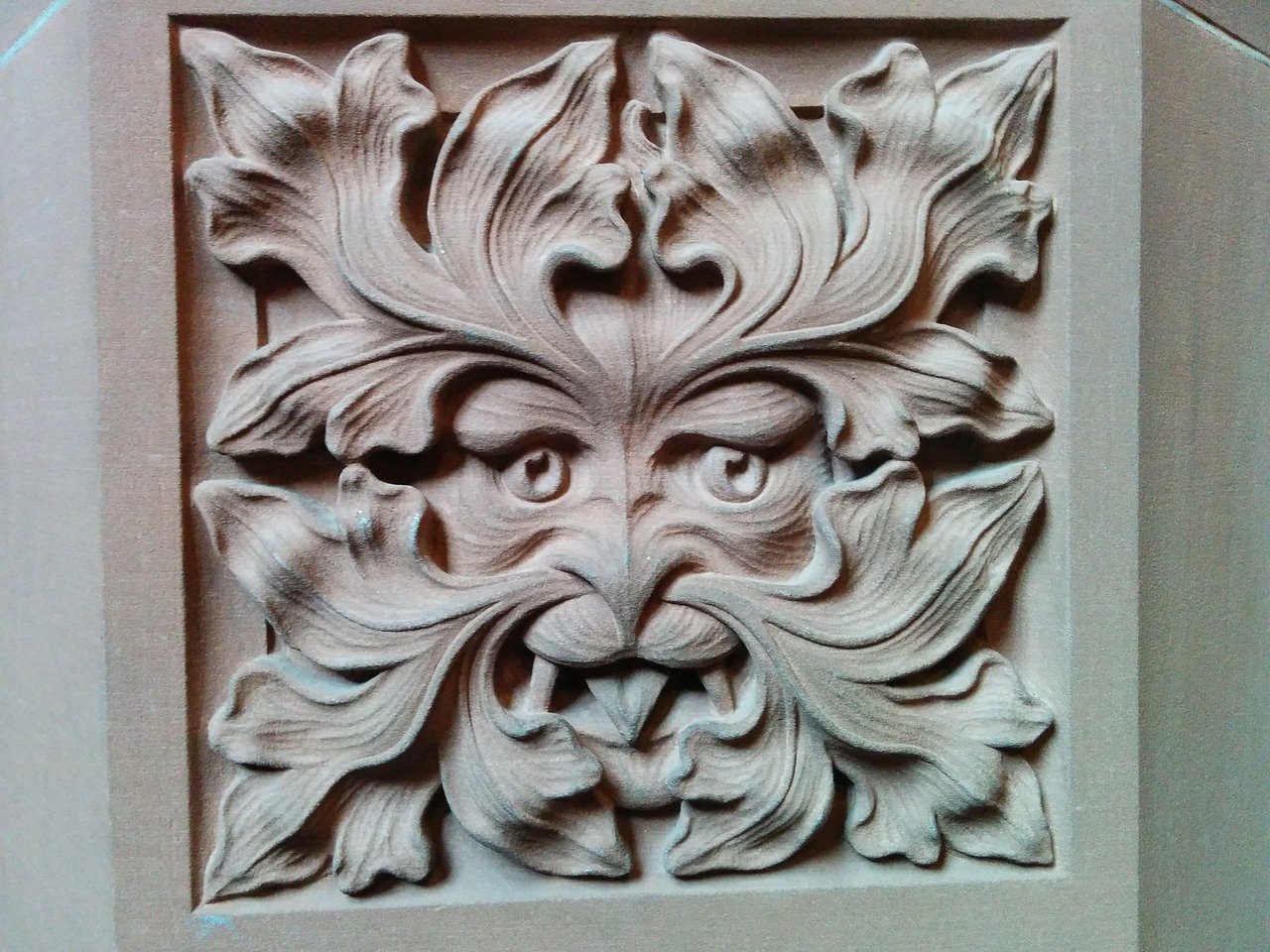 So, yes, the name most certainly is recent. But the motif is far more ancient. Liz shows that, the name issue aside, its origins are just about as long as they are winding and open to question and debate: ‘On the surface it seems these images are pagan, but they can often be found in ecclesiastical buildings from the 11th Century onward. Many look either unsettling or mystical, which is sometimes thought to show the vitality of the Green Man in that it was capable of enduring as a character from pre-Christian traditions. This was probably due to the fact that in early Christianity old symbols were often incorporated into the newer religion. And, from around the 14th Century on they were also included simply as decoration in things such as manuscripts, stained glass, and other items.’

Liz also notes that in Britain, at least, the Green Man icon became very fashionable again during the 19th Century, when it was used in architecture and arts and crafts. Moreover, to this day, the image is still used as decoration in many parts of the world by artists using many different types of media, including literature. There is another aspect to the mystery, too. The expression shown on the faces of many Green Men found in churches seems to suggest some form of torture. It may be that such expressions were to remind people of sin and that their souls would burn in hell if they committed such transgressions. As the image also represents renewal and rebirth, in a church the image might be a sign of resurrection where it appears, especially when found on tombs. It might also be a sign of creation. Or, it may just be a sign of nature and fertility. 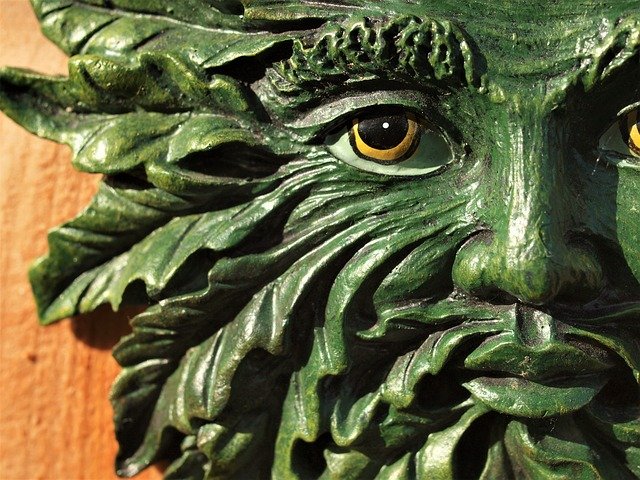 It is thought that the Celts adorned their victim’s head with leaves, which might lead us to speculate that the Green Man has Celtic origins; however the first depictions of Green Men come from Classical Roman times. But, if it is Celtic, then - where it is shown next to, or above, doors - it might be to protect the building from evil spirits. The problem, however, remains that – as Liz notes – “…in the very early years of the Church, and when it took over in Britain, all pagan images were destroyed and banned. So it’s hard to see how the Green Man should then have been included in church architecture. And yet, there are no accounts from Mediaeval Times that tell us how the image of the Green Man came to be included in churches. Regardless of what the Green Man was intended to represent in church architecture current congregants see him as the archetype of our oneness with the earth. And, for Wiccans and Neo-pagans he portrays an earth-centred idea of male divinity.”

She adds: “Today, the symbolism of the Green Man has come to mean the relationship between man and nature. It reveals an essential basic pattern deep in the human mind. It has become an archetype that is common to all and represents a profoundly sympathetic feeling for, and with, nature. This has probably arisen from our current concerns about the ecology, and environment, of Planet Earth.”