Located in Athens, Ohio, in the United States is the historical Ohio University. Established in 1804 and first opened to students in 1809, it has a long history, being the oldest university in Ohio and the 8th oldest in the country. It is perhaps this long history that has contributed to it becoming known as one of the most haunted university campuses in the world, with numerous locations on campus said to harbor ghosts and specters, such as Jefferson Hall, Washington Hall, Bush Hall, Shively Hall, Perkins Hall, Voigt Hall, Crawford Hall, Cutler Hall, the Convocation Center, College Green, Lin Hall, the Brown House, Delta Tau Delta, Alpha Omicron Pi, and a building that was once a State mental asylum, now a patch of ruins called The Ridges. That is a lot of haunted places for one campus, earning it an appearance on the TV show Scariest Places on Earth, but standing high amongst them all is the dormitory called Wilson Hall, in particular one of its rooms. Here one will find a locked door, entry barred and the place sealed off, forbidden, because this room just happens to be one of the most evil, haunted locations of an already very haunted place.

Wilson Hall itself, named in the honor of the late faculty member Hiram Roy Wilson, is actually a rather new building, erected in 1965 and not nearly as old as much of the campus around it, yet it has nevertheless managed to attract quite the impressive reputation as being incredibly haunted, with all sorts of urban legends congregating around it over the years. One of the most popular is that the hall was built upon a giant pentagram that can be drawn between five surrounding cemeteries on a map, and indeed Wilson Hall supposedly sits right in the middle of it. There are also the typical spooky tales of Satanic worship carried out there in the old days, or that covens of witches would perform dark rituals in the cemeteries, and it has also been found that the hall was actually built over the site of an early cemetery for the Athens Mental Institute, an insane asylum which was closed off and abandoned in 1993. There is also a rumor that there is an ancient Indian burial ground nearby, because why not? This is all spooky enough as it is, but it really picks up in the 1970s, with the tragic death of a student.

According to the lore, a female student once lived in room 428, but that one day her behavior started to get very odd indeed. She supposedly became very withdrawn and began obsessively studying the occult, becoming so absorbed that it affected her school studies and social life. Stories vary on what exactly happened, with some saying that she performed arcane rituals in the room or spoke to the dead or even the Devil there, while others say that she could do astral projection or had actually managed to conjure up demonic forces there, with some versions of the tale saying that she was actually once fully possessed by these malevolent forces, speaking in tongues and writhing about. While there are a lot of different details, they all agree on one thing, that she died in that room after losing her mind and either cutting her wrists or jumping from the window. It is also agreed that, whatever truth the stories actually hold, Room 428 is most certainly very, very haunted.

After the death, it seems as if practically everyone who lived in the room or even stepped foot there experienced something out of the ordinary, and the list of supposed paranormal phenomena tied to Room 428 is long. Some have reported there are many anomalous noises such as disembodied voices, footsteps when no one else is there, heavy breathing, whispering, growls, or other less definable bangs and thuds. Often the voices heard here were described as being very malicious, telling people to get out or to die. More sinister reports are that demonic faces would appear in reflective surfaces or even within the woodwork only to vanish again, or that blood will sometimes drip from the ceiling or walls. Poltergeist activity is also supposedly very intense here, with objects thrown across the room with great force or unseen hands that will poke and prod, and of course there have been many reports of seeing the apparition of the dead student herself lurking in the shadows. It has also been reported that the room holds an incredibly potent feeling of despair and dread that is almost palpable in its intensity and has caused some people to panic and run from the room in fright. 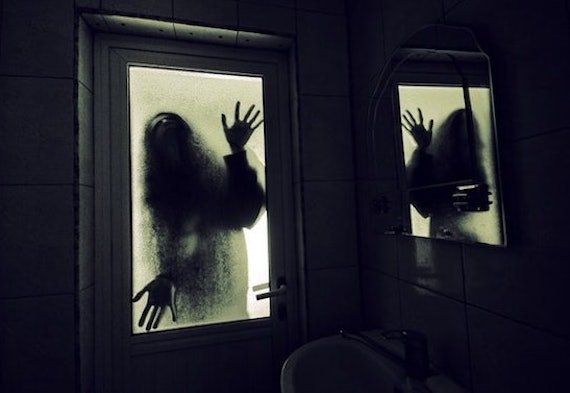 For years these reports came in from residents and visitors, and it got so bad that the university actually ended up closing the room down, not allowing any residents to live there, sealing it shut, and deeming it “uninhabitable.” To this day the room remains closed off and off-limits, whatever is in there contained, but there is plenty of other paranormal activity reported from other areas of Wilson Hall as well, although the residents seem to take it all in stride and even seem to be proud of it. One resident has said of the building’s haunted reputation and her thoughts on it:

As someone who lives in Wilson Hall I have yet to experience any of these phenomena's but that is not to say that they don't happen. I have had some friends on the third floor experience the marbles rolling on the floor but my friends on the 4th floor, the supposed most haunted floor have not experienced a thing so I guess it depends. All in all, I love living in Wilson and it is always a good conversation starter with people who know it as the most haunted place on the most haunted campus in the United States. It's important to understand this because the history of the place we live will give us a better understanding of the community. This history of the haunted Athens does give us a sense of togetherness with our fellow OU students. We even identify with it when other students that we know acknowledge the fact that OU is infamous for our hauntings. Don't be scared of our haunted past, embrace it.

Why is this place so apparently haunted? What draws these forces here, especially to that room? Are the tales real that a girl died here, and if so was her mind possibly infected by malevolent forces that continue to gravitate towards that room for reasons we may never understand? Or is this just a good dose of spooky urban legend and local lore? It is curious that it was all enough to convince the university to actually seal the room off indefinitely, and whether it is really haunted or not, that door remains locked and its dark secrets sequestered within, whatever those may be.