The Legend Of The Naked Freezing Ghost Of New Orleans

New Orleans has been often referred to as the most haunted city in America and especially in the French Quarter where numerous spirits are said to frequently make their presence known. One spirit in particular is named Julie and she is said to walk along the top of a downtown rooftop. Rumor has it that if you look up to the rooftops of the 700 block of Royal Street, you can see Julie’s ghost pacing back and forth.

According to the legend, Julie fell in love with a rich Frenchman but they were unable to get married because of their racial differences – she was 1/8 African-American and unfortunately biracial relationships were frowned upon in the 1800s. One night during a house party, the Frenchman got frustrated with Julie’s constant pressure for him to marry her so he told her that if she took her clothes off and waited for him on the rooftop, they would get married. Although he wasn’t serious (or maybe he was...), she proceeded to the roof as she wanted to prove her deep love for him.

Since it was December, the air was quite damp and cool while she waited all night for him to join her. When he finally realized that she had taken his joke seriously, he went to the rooftop where he noticed her frozen, naked body still holding onto the brick chimney. He apparently died shortly after from a broken heart.

On cold December nights, many people over the years have reported seeing Julie’s ghost on the roof of 734 Royal Street. While some people see her pacing and shivering on the rooftop completely naked (except for a pair of gold hoop earrings), others say that she is wearing a wedding dress. But they all say that her ghost is still waiting for her lover to show up while pacing along the edge of roof trying desperately to keep warm until finally collapsing near the break of dawn. 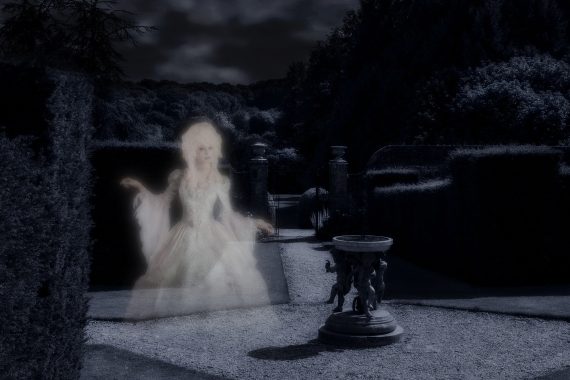 Julie’s apparition has also been seen on the balcony and inside of the house, specifically in her former chamber where unexplained footsteps can sometimes be heard. Additionally, the ghost of a man dressed in 19th century clothing has occasionally been seen in the windows as well as walking through the courtyard.

And if you’re having relationship problems, you can write your issue down on a piece of yellow paper using a blue pen and place it on Julie’s altar and allegedly she’ll answer your question with some of her centuries-old love advice.