Located in the Atlantic Ocean in the region called Macaronesia and just about 62 miles from the northwestern coast of Africa off Morocco is a Spanish held archipelago called the Canary Islands. Known for its amazing beaches, pleasant climate, biodiversity, and numerous natural features it is a major tourist destination in the region, yet what many of those fun seekers may not know is that these scenic islands were once the location of one of the most bizarre mass UFO sightings in history, which would be seen by thousands of witnesses from all walks of life and remains an unsolved conundrum.

It began on June 22, 1976, when people living on the islands of Tenerife, La Palma, and La Gomera began calling in to report numerous strange lights performing odd maneuvers in the sky, amongst them one that seemed to be larger than the others, described as a giant, luminous sphere. Among these reports some were more spectacular than others, and one of the first reported incidents was made by the Navy escort ship, the Atrevida, which at the time was positioned off the coast of Fuerteventura Island. On this evening at approximately 9:27 PM the crew observed an extremely bright light moving in the general direction of the ship. It was first thought to be a normal aircraft, but this turned out to not be the case, as it began rotating, pulsating, and generating a blindingly bright halo of yellow and blue, as well as various flashing strobe effects. The baffled crew watched this mysterious object for a full 40 minutes, and the official report from the ship would read in part:

The original light went out and a luminous beam from it began to rotate. It remained like this for approximately two minutes. Then an intense great halo of yellowish and bluish light developed, and remained in the same position for 40 minutes, even though the original phenomenon was no longer visible. Two minutes after the great halo, the light split into two parts, the smaller part being beneath, in the center of the luminous halo, where a blue cloud appeared and the part from which the bluish nucleus had come, vanished. The upper part began to climb in a spiral, rapid and irregular, and finally vanished. None of these movements affected the initial circular halo in any way, which remained just the same the whole time, its glow lighting up parts of the land and the ocean, from which we could deduce that the phenomenon was not very far away from us, but was close. 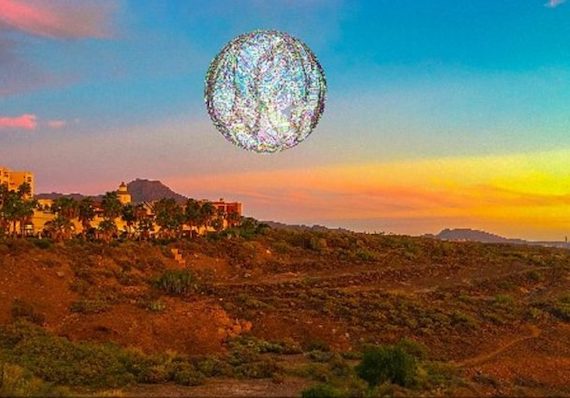 At no point was the craft picked up on radar, and a check of air traffic in the area showed no military or civilian aircraft scheduled to be in the vicinity. This would start a whole series of reports from throughout the Canary Islands as whatever it was headed out on its inscrutable mission, and people seemed to be reporting two different types of phenomena, one being this large sphere and the other being smaller flitting orbs, and these were seen by hundreds of people across several islands. One of the most intriguing reports came from a doctor Francisco Padron Leon, who at the time was in a taxi on his way to a house call at the town of Las Rosas. However, things got very odd when both he and the driver noticed an illuminated globe up in front of them, just seeming to hover over the ground. According to Leon’s report, it measured an estimated 100 feet across, and was seemingly made up of a semi-clear material like crystal. More bizarre still was that as they drew closer they could see that the bottom of the sphere was ringed by some sort of metallic platform, upon which two immense humanoid beings around 10 feet in height were standing next to large consoles of some kind. These two creatures had oversized heads, wore some kind of helmets, and seemed to be operating a giant tube that belched forth a bluish smoke, and the doctor would say of these entities and what happened next:

At each side of the center there were two huge figures of 2.50 to 3 m. [8.5 to 10 ft.] tall, but no taller than 3 m. [10 ft.], dressed entirely in red and facing each other in such a way that I always saw their profile. Then I observed that some kind of bluish smoke was coming out from a semi-transparent central tube in the sphere, covering the periphery of the sphere's interior without leaking outside at any moment. Then the sphere began to grow and grow until it became huge like a 20-story house, but the platform and the crew remained the same size; it rose slowly and majestically and it seems I heard a very tenuous whistling.

This gigantic sphere would ascend and then purportedly shoot off at astounding speed along with its mysterious occupants. It would then be seen by several other witnesses directly after this, including the very patient that the doctor was on his way to see, all of who described the same translucent crystalline structure and giant beings on their catwalk. By the end of the evening there would apparently be thousands of reports from across the archipelago describing something bizarre going on in the sky, coming from a wide variety of professions and ages and making them one of the most mass witnessed UFO events ever, yet it was all mostly swept under the carpet by the Spanish Air Force.

The following year, in 1977, some of these reports were leaked to journalist J. J. Benitez by a Spanish Air Force General, and would subsequently find their way into his book UFOs: Official Documents of the Spanish Government, but this was all still considered unverifiable and filled with spooky conspiracies. It would not be until 1994 that people would really take it seriously, when the Spanish Air Force declassified its files on the events and it was clear for all to see that something very odd had indeed been documented from that evening. The declassified report was very detailed, included over 100 pages of testimony, evaluations, drawings, a full chronology of the sightings, and it also took the step of separating witnesses by their perceived level of veracity and reliability, with the reports of the crew of the Atrevida and that of doctor Leon ranking at the top. It was also explained that an investigative adjunct had been launched by the Spanish Air Force, which had found that there had been no military or civilian aircraft at the time and they officially labelled it an “unidentified aerial phenomena.” The report would conclude:

The fact that a very strange and peculiar aerial phenomena occurred on the night of 22 June is a true and proven fact, as incredible as its behavior and conditions may seem. We should have to think seriously of the necessity of considering the possibility of accepting the hypothesis that a craft of unknown origin, propelled by an equally unknown energy, is moving freely over the skies in the Canaries.

It is a startlingly clear and refreshingly frank piece of declassified information, with the rare stance of a government honestly throwing up their hands and admitting that they don’t know what they are dealing with. No Venus, ball lightning, Jupiter, or other attempts to wedge it all into the mundane, just the acknowledgment that something very weird was going on, indeed, and leaving the field open for speculation. What happened over these secluded islands back in 1976? What did they want and who or what were those enigmatic beings? The Canary Island UFO sightings remain important in that they were reported by so many witnesses, many of which were highly reliable, as well as the fact that occupants were observed and the government admitted they have no answer for it all. Although this case still remains rather obscure, it certainly seems to be worth another look.