It’s not the biggest star in the sky, nor the brightest. However, it has mythical properties (it’s the one we wish upon) and has led navigators, wise men, those who are lost and those who need an inspiration for centuries. It’s the North Star – a.k.a. Polaris or the Pole Star – and its seemingly unwavering position in the north sky of the Northern Hemisphere at the end of the handle of the Little Dipper (Ursa Minor) make it Earth’s current northern pole star. It’s also a sacred star to numerous religions; it led escaped slaves north on the Underground Railroad; it propelled Jiminy Cricket to worldwide wishing fame. It’s no wonder that astronomers are concerned that Polaris has begun acting strange. How strange? Measurements of its distance from Earth and its mass have suddenly begun fluctuating. Is it a sign of the apocalypse? Will our compasses stop working? Can we blame the coronavirus on it? Will this negate all past wishes or just future ones?

“However, as we learn more, it is becoming clear that we understand less. There is evidence that Polaris is much less massive than stellar evolution models suggest and that Polaris is a much younger star than its main sequence companion.”

It’s never good to hear a scientist say “the more we learn, the less we know” – even if the scientist is an astrophysicist. However, that’s exactly what University of Toronto astrophysicist Hilding R. Neilson and undergraduate student Haley Blinn say in their new paper with the scary title: “The Curious Case of the North Star: the continuing tension between evolution models and measurements of Polaris.” Tension? What kind of tension?

"Polaris is what we call an astrometric binary, which means you can actually see its companion going around it, sort of like a circle being drawn around Polaris. And that takes about 26 years."

Well, that’s going to cause some tension right there … you haven’t been wishing upon one star but a pair – Polaris A and Polaris B, which orbits A every 26 days. Polaris A is also known as a cephid – a star that pulsates in both brightness and size. Sounds scary, but this is actually a good thing – or at least it was. Cephids are actually easier to measure than normal stars because measuring changes in the pulsations helps determine its distance from Earth. Because of that, they’re helpful is calculating distance between objects throughout the galaxy. 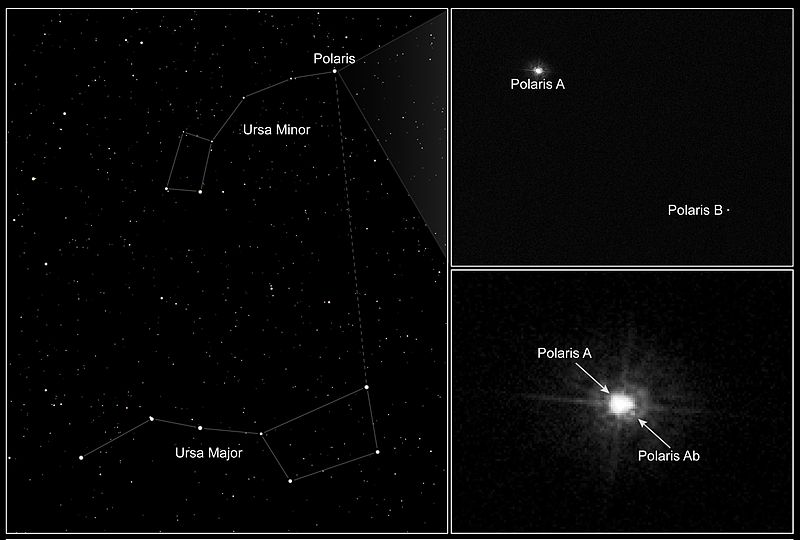 Except when they’re inaccurate.

The Hubble space telescope has made Polaris B easier to see and monitor. From that data, astronomers have determined that Polaris is about 3.45 times the mass of the sun. That’s much less than previously-determined 7 times the mass of the sun calculated from other measurements. This throws off the distance calculations as well. The new data also shows that Polaris B is much older than Polaris A – highly unusual for binary stars. Those discrepancies concerned Neilson and Blinn, which led them to generate many new models in an attempt to solve the problem and ease the tension.

They should have tried wishing instead.

According to their summary in LiveScience, part of the problem is the fault of Polaris – it’s too bright for most telescopes to observe and collect accurate data. According to Neilson and Blinn, part of the problem may be yet another Polaris. They speculate that Polaris A once had a collision with another star – a catastrophe that actually can have the happy ending of making the combined star bigger (not surprising) and younger-looking (why can’t this work with humans?). As a result, the new star has looks that are deceiving to telescopes and astrophysicists, throwing off measurements dependent upon an accurate age of the star.

"This would be an unlikely scenario, but not impossible."

When no other explanations work, even astrophysicists consider the unlikely.

“As a result of this work, it is challenging to draw significant conclusions beyond the fact that Polaris continues to be an enduring mystery and the more we measure the less we seem to understand. Perhaps the new decade will bring new insights that will resolve these challenges.”

The more we know, the less we understand. Any thoughts, Jiminy?

She? Which Polaris is the she? Does that lying Pinocchio know?