Throughout history there have been cases that are really rather off-kilter and weird, yet which seem to have just been forgotten in the din of so much else going on. There are some accounts of truly bizarre crimes that seem to have never been fully noticed or followed up on, and one of these is certainly the story of a man who dug up graves and committed murder in the name of making himself an immortal, and very handsome fellow.

Beginning in April of 1971 there was a gruesome spate of strange crimes carried out at several cemeteries around Nuremberg, in Bavaria, Germany. A series of already dead corpses began showing up exhumed from their graves in the night and exhibiting signs that someone had bitten and gnawed on them. In the case of female corpses there were some signs of sexual contact, and some had been mutilated or cut up with a knife, with a few beheaded or even missing their hearts. At first thought to be separate anomalous incidents, there would be found to have been at least 35 corpses given this treatment between 1971 and 1972, leading police to suspect that they were all connected and that there was a seriously disturbed individual out there chewing on, mutilating, and having intercourse with freshly dug up corpses. 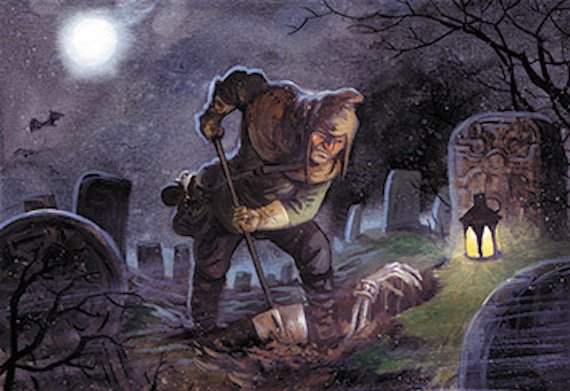 It all got a bit more sinister when on May 6, 1972, a Markus Adler, 24, and his fiancee Ruth Lissy, 18, were found shot to death in their car, their corpses treated in a similar manner to those in the cemeteries, with the woman showing signs that someone had drunk her blood, and it now seemed that the perpetrator had graduated from grave defilement to flat out murder. This would be further driven home when another woman was found shot and defiled the same way, also having blood drunk from her. It certainly seemed from the modus operandi that this was likely the same perpetrator, but police were having no luck tracking whoever it was down, and he remained a specter haunting the graveyards just as surely as any ghost, even as newspaper splashed out headlines on what they were calling “The Vampire of Nuremberg.”

Later that same month, a strange encounter would lead to the capture of the monster. One evening in late May of 1972, a morgue attendant by the name of George Warmuth was doing his rounds through the cemetery when he noticed the dark shape of someone hunched over in the gloom. Creeping closer, the attendant came upon the shocking sight of a man in the act of what seemed to be kissing a corpse he had just dug up. The intruder seemed to be just as surprised as the attendant was, and drew up a pistol to fire off a shot before running off into the darkness like some revenant creature of the night. The morgue attendant was luckily unharmed, and his description of the suspect would lead to the police tracking down the perpetrator, leading the case even further into the odd.

Police detained a 41-year-old man by the name of Kuno Hofmann, who was a deaf mute German laborer who had a long history of mental problems. He had been in and out of institutions all of his life, and had escaped these places a total of 12 times, and furthermore had done a stint in prison for theft. Hoffman had had a difficult childhood, abused repeatedly by an alcoholic father, which had led to his muteness and permanently scarred him for life. Authorities were shocked when Hoffman wasted no time in readily confessing to not only the grave robberies, but also the three murders, explaining how when it proved difficult to procure bodies through morgues he had chosen fresh graves through death notices in the newspapers, how he had procured a set of keys to one of the cemeteries, and how when mere corpses hadn’t been enough he had been forced to turn to living victims. But why did he do it? Well, that is where things get even stranger still.

According to Hofmann, while in prison he had taken a strong interest in the occult, reading as much as he could on arcane rituals, black magic, satanism, vampirism, and what he called the “occult sciences,” all in order to figure out a way to make himself stronger and more handsome. He continued these studies even after being released, and he had a lot of time to do it too, since he found it almost impossible to hold down any sort of regular job, which had furthered his sense of loneliness and alienation. In order to achieve his goals of becoming good-looking, popular, and normal, he had come under the impression that he needed to drink blood and perform dark rituals over the bodies, and so had taken to doing so at graveyards before working up the courage to try it with living victims, who he claimed had much better quality blood. It was a surreal story, and going into trial no one could figure out if he was sane enough to be held accountable for his ghastly actions or not.

At the resulting trial, the defense certainly pushed the insanity aspect, but this ended up not working out, as Hofmann was found to be of sound mind and perfectly able to distinguish right from wrong. He was subsequently sentenced to life in prison, and for his apart he would admit that if he had not been caught he would have continued his killing spree. Apparently learning nothing, according to some accounts, his last request before being locked away forever was for one last sip of blood from a virgin. It remains a very unusual case of a very disturbed individual relying on the occult to nefarious ends, and although this one is solved, The Vampire of Nuremburg is still quite the macabre historical oddity.