The Strange Case of the Phantom Barber

Sitting out in Jackson County, Mississippi, in the United States is the city of Pascagoula. Although now it is the county seat of Jackson County and boasts a population of around 30,000, there was a time when this was just a tiny, sleepy fishing village where not much happened. It was not until World War II broke out that the town would get a fresh infusion of life, when it became a major producer of warships for the military and there was a huge influx of people. The town swelled up substantially during this time, tripling in just two years, and unfortunately this brought in its fair share of undesirables and the dregs of society as well. While many of these were simply thieves, mobsters, and drunks, during the years of World War II there would another type of criminal here as well, who would go on to become one of the more bizarre cases of a mysterious phantom intruder.

On June 5, 1942, two young ladies named Mary Briggs and Edna Hydel were sleeping in their room at the convent of Our Lady of Victories on an otherwise quiet night when they were startled and woken by a loud crashing noise that drew their attention to the window. There frosted by the streetlight beyond was the form of a short, slightly chubby man wearing a billowing white sweatshirt, who glared at them before climbing out into the night. A look around the room showed that nothing had been stolen, but they were to soon realize that each of them was missing a lock of hair from their head, as if they had been cut off with a pair of scissors. Although no one was injured it was a creepy thought that some scissors wielding weirdo had cut off portions of their hair as they slept. Yet, at this point the police didn’t really think it was a big deal and it was sort of just brushed off, but it would seem that this was only the beginning of what was to prove to be a very strange series of similar incidents. 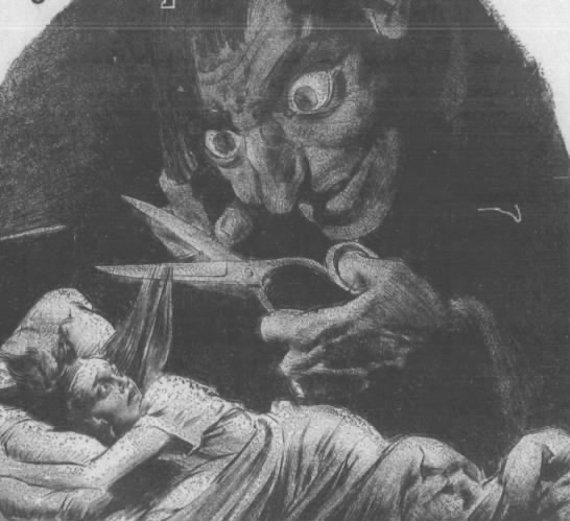 A week later, the intruder would slash open a screen door and infiltrate the home of a David G. Peattie to snip a lock of hair from the head of the family’s 6-year-old daughter, Carol, even as she was sleeping right beside her brother. In this case no one heard a thing, and did not realize what had happened until the following morning. A footprint left by a bare foot and ringed by sand near the window would be the only other evidence left behind, and once again no one was harmed and nothing else seemed to have been touched. That week there would be three more similar reports, in each case the mysterious trespasser slitting the screen door to enter and take trophies of hair. For the most part this seemed harmless, there was one attack that was decidedly more violent, when a Mr. and Mrs. Heidelberg were assaulted in the middle of the night by a raging attacker wielding an iron bar, who knocked out teeth and left them unconscious. It is not known if this attack was connected to the hair thief or not, but it showed a potentially violent side to the perpetrator, which only fueled growing panic.

These accounts were enough to start the media machine going, with the perpetrator soon being dubbed “The Phantom Barber of Pascagoula.” People were afraid to go out at night and made sure windows and doors were firmly locked and secured, sometimes even sleeping in shifts to make sure the demented intruder wouldn’t come for his hair, and things got so bad that the ship building industry was affected by fathers staying home from work to protect their families from the Phantom Barber. Despite all of these precautions, whoever it was did not even seem to be finished yet. Several other reports came in over the next several weeks of people complaining of a mysterious trespasser slitting open window screens and entering homes only to shear off portions of hair from the victims. Oddly, in every case, the mysterious prowler seemed to prefer blonde hair, was only ever active on Monday and Friday evenings, and in every case he managed to carry out his bizarre work without being seen. Despite the no one was apparently hurt, the intrusions were still enough to instill panic in a population already on edge due to the looming shadow of World War II.

Authorities were desperate to catch the elusive perpetrator, and went to great lengths to do so. Six new deputies were recruited into the police force, extensive use was made of bloodhounds, and the town’s curfew laws were changed. Even the Army joined in, modifying its blackout rules, which required people to turn off all lights after a certain time in order to protect from potential air raids, in order to help police in their search for the Phantom Barber by denying him the cover of darkness. In spite of all of these efforts no one was caught, and the only clue that could be found was a pair of bloody gloves in the nearby woods, its connection to the Phantom Barber unknown. 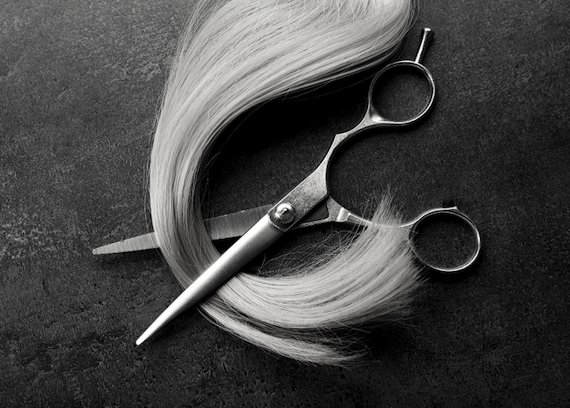 Even in the face of all of these police buzzing around like angry hornets the barber defiantly continued his weird work, claiming another tenth victim when he broke into the home of a Mrs. R.R. Taylor and hacked off a portion of her hair. This case would be a bit more sinister than most, as Taylor described that she had woken up in the middle of the night to a noxious odor and something pressed to her face, after which she had fallen unconscious and later become violently ill. This would lead the police to suspect that a chemical agent such as chloroform had been used, but there was no other evidence. By now the public was in a hysteria, and considering that no suspect had been found people were suspicious that anyone could be the Phantom Barber, with some rumors even saying that he wasn’t human at all, but rather some sort of ghost.

It was as people were stirred up in a complete frenzied panic that police announced that they had found a suspect who they believed was the mysterious barber. The man was a German chemist named William Dolan, who was suspicious in that not only was he well known to have had a long standing grudge against the Heidelbergs, but he also had the know-how to concoct a mixture like that believed to have been used in the attack on Mrs. Taylor, and most incriminating of all was a tied up bundle of human hair discovered hidden behind his house, some of which was actually found to belong to the Phantom Barber victim Carol Peattie. It seems like this should have been case closed, yet although he was charged and imprisoned for the brutal attack on the Heidelbergs he was never found guilty of the Mad Barber hair thefts, even though it would turn out that all such attacks ceased when Dolan went to jail for the assault. Throughout this all, Dolan for his part would adamantly deny having anything to do with the Phantom Barber.

There has been some amount of debate as to whether Dolan was actually the Mad Barber. One theory is that he was framed for the crimes, as he was well known around town as a German sympathizer and therefore a traitor. After all, this was a time when anti-German sentiments in the United States were running high, so the idea is that he was framed in order to get him out of the picture. It has even been speculated that the Mad Barber himself was the one doing the framing, the whole thing an elaborate plan to get Dolan arrested. However, this seems like a lot of trouble to go through, and even then, why hair? Another idea is that Dolan definitely was obviously the Phantom Barber, but it so we are still left with many questions, such as why did he so viciously attack the Heidelbergs while leaving the other victims simply without some of their hair? What were his motives? Why take hair and nothing else? Dolan was eventually set free in 1951, but there were no further Phantom Barber attacks after this. The case was perhaps best brought out of obscurity by researcher Theo Pajimans in his article for the Fortean Times titled The Phantom Barber of Pascagoula, and it has been studied and discussed without any firm answers in sight. Whatever was going on here, the weird case of the Phantom Barber of Pascagoula is a curious historical oddity that has never been conclusively solved and will probably forever elude us.

Half of Brits Surveyed are Ready to Battle Extraterrestrials