There are people who have supposedly had odd encounters with UFOs and aliens from all over the world, from all walks of life. Among these have often been those who have high social standing or are well-known by the general public, and these usually attract the most attention. After all, some random sighting from an unknown guy in Bumpsville is likely to be quickly forgotten, but what of when it is an icon who is a household name? Just as with tabloid reports these are the kinds of stories we can't get enough of and are inexorably drawn to, and one in the UFO community that has shown staying power is the time the great American entertainer Jackie Gleason was purportedly shown alien bodies by former president Richard Nixon.

A lot of younger readers might not recognize the name, but in his day the comedian, actor, and writer Jackie Gleason (1916- 1987) was a legendary icon. Probably best known for his character Ralph Kramden in the hit television series The Honeymooners and his role as Sheriff Buford T. Justice in the Smokey and the Bandit series of films, Gleason had a long and storied career, appearing in countless movies and TV shows in the 1950s and 60s, including his own The Jackie Gleason Show, also launching a successful music career, and he was a very famous and well-known stalwart of the entertainment industry and a household name. Behind the scenes, though, he had an array of unconventional hobbies that many people did not really know about and which he tried as much as possible to keep out of the public eye.

You see, Jackie Gleason was a complete paranormal and UFO geek. He spent hours reading about all areas of parapsychology, Forteana, aliens, and the unexplained, and obsessively collected books on such things, in particular UFOs. Indeed, he is widely known as having had one of the largest private collections of books on UFOs in the country, which would be donated to the University of Miami after his death. In the biography The Life and Legend of Jackie Gleason, author William A. Henry III explains of this intense interest and fascination thusly:

Jackie Gleason had a lifelong fascination with the supernatural. He would spend small fortunes on everything from financing psychic research to buying a sealed box said to contain actual ectoplasm, the spirit of life itself. He would contact everyone from back-alley charlatans to serious researchers like J.B. Rhine of Duke University and, disdaining the elitism of the scholarly apparatus, would treat them all much the same way. Gleason was a frequent insomniac. He would stay up high the night reading (or rereading) some of the hundreds of (UFO and paranormal phenomena) volumes in his library.

He was hardcore, in other words, even once saying himself, “I’m kind of a nut on the subject.” It was partly this interest that led to his friendship with former president Richard Nixon, who was also interested in UFOs. Gleason had also long supported Nixon’s campaigns and was a staunch Republican, and as Nixon had a vacation compound not far away from Gleason’s Florida home the two would strike up a friendship to become frequent golfing buddies, chattering about UFOs and other weird stuff the whole time. It was after one of these golf outings on February 19, 1973 that Nixon apparently showed up alone at Gleason’s door in the middle of the night and allegedly excitedly told Gleason to get dressed because he wanted to show him something, after which the comedian was taken to Homestead Air Force Base in Florida and guided by armed guards to a top-secret, highly secured remote installation. Things would purportedly get very strange from here.

Gleason was reportedly led into an underground area through sterile corridors and past several ominous laboratories, at one point passing a weird twisted metal mass encased in glass that Nixon told Gleason was the remains of a UFO. Gleason supposedly wasn’t sure what to think of this, and at first thought the president was just joking around, but he would soon find that this was no joke as he was led into a large chamber area where there were “six or eight of what looked like glass-topped Coke freezers.” Within each of these freezers was allegedly the mangled remains of tiny humanoid bodies, according to Gleason “only about two feet tall, with bald heads and disproportionately large ears.” These, he was told, were the remains of the occupants of a UFO that had crashed "nearby," and to say it was shocking to the great comedian would be an understatement.

Upon returning to his home he was apparently very unsettled, noticeably disturbed and panicked, and looking haggard. This was enough to alarm his wife at the time, his second wife Beverly McKittrick, and after at first denying that anything was wrong after several sleepless weeks, during which he could barely even eat, the shaken Gleason apparently came clean and told her everything, swearing her to secrecy in the process. Unfortunately for him, Gleason and Beverly’s marriage was on the rocks at the time, and she promptly broke her promise to keep it all secret, first writing of it in a book that she planned to publish on their marriage but never did, and then according to her recounting the tale in a high profile interview with Esquire magazine in 1974, something which purportedly greatly perturbed Gleason, to the point that according to her it directly led to their prompt divorce, as well as again in The National Enquirer in 1983.

The comedian himself would stay silent on the matter, neither confirming nor denying his wife’s tale, and only apparently coming clean in 1986, when UFO researcher Larry Warren claims Gleason himself confided in him to tell him it was all true, however, it is not clear if this meeting ever took place and Warren has been criticized for embellishing accounts in the past. How do we explain that nothing was heard from the comedian himself? Larry Bryant, the editor of a UFO newsletter called Just Cause, to which Gleason subscribed, and who also unsuccessfully tried to get records on the event from the military through Freedom of Information Act requests, says he tried to get an affidavit from Gleason on the matter, and says of his silence:

Though I never did hear from Gleason, I did learn that he had been contacted by a third party in the film industry. At this confrontation, Gleason chose to neither confirm nor deny the story, saying that he would prefer not to discuss it all. The way I see it Gleason easily could have set the record straight in reply to my proposal or in an explanation to the inquisitive film-industry representative. If the story was a fabrication or misinterpretation on the part of his wife, he now had every opportunity to say so. That he chose not to merely deepens the mystery.

This is one of the problems we face with this outlandish tale, that it is only officially known from the account given by Gleason’s ex-wife, who was not only writing a book at the time, but also was not too happy with the late comedian in general at that point, their relationship having gone very sour. It is very probable she made it all up out of spite or to sell books, but this hasn’t stopped a lot of researchers from trying to track down if there is any truth to the tale, and any truth there may be seems to be pretty thin on the ground. 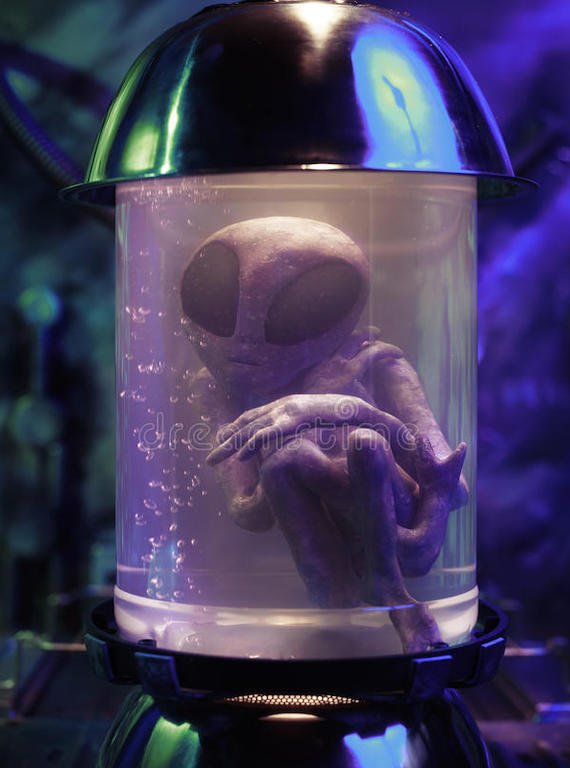 It has been confirmed through Gleason’s personal diaries that he did in fact play a game of golf with Nixon on the day in question, and that they had spent about 10 minutes talking about UFOs, but that is about it. Gleason himself makes no mention of covert midnight meetings or of being whisked off to a secret base to be shown crashed spaceships and dead aliens, and he never publicly spoke about it, although the more conspiratorial minded among us will likely say that these entries were either redacted or were never written at all in order for Gleason to keep his secrecy on the matter. There is also absolutely no corroboration or records from the Air Force base that Gleason had ever been there at all, much less on the night of February 19, 1973, and even if he was, is it normal operating procedure to allow a civilian entertainer with no security clearance at all to just waltz into a top secret installation and show them whatever you want, including freaking dead aliens? Also, just how did Nixon get away from the constant presence of his Secret Service security detail, which usually shadowed his every move, to go traipsing off to a comedian’s house to tell him the truth about UFOs and aliens? It all makes the whole affair not a little suspicious, although then again the military might have covered it up, perhaps. Yet this is not the end of the strikes against this amazing tale.

Perhaps the most damning thing about it all is that the Esquire article that Beverly adamantly claims to have appeared in doesn’t actually seem to exist, narrowing down the only real known coverage of it to an article in The National Enquirer, not exactly known as the last bastion of journalistic integrity. Beverly for her part insisted that the Esquire article does exist in an interview with researcher Kenny Young in 2003, and sure maybe the Esquire article was “erased,” but the fact of the matter is that every article on the case can be essentially traced back to that National Enquirer article, which incidentally also happens to have painted Gleason in a very negative light, perfectly keeping in line with what one would think a vengeful ex-wife would write.

So was this the work of a conniving, spurned woman getting revenge? Maybe. Was she trying to drum up interest for her planned book that never came to fruition? Likely. Was a lot of this exaggerated and played up over the years? I wouldn't doubt it. Did Richard Nixon shake off his security detail to randomly gather up a comedian in order to take him to a top secret military facility and show him dead alien bodies and the wreckage of a spaceship? Who knows? Does it make for an entertaining little historical oddity that has managed to worm its way into the UFO lore? Definitely.