A Curious Case of a Dead Alien Humanoid in Sweden

Aliens and encounters with strange humanoids are one thing, but quite another is when these creatures are found dead or dying, leaving behind riddles that we may never solve. Such cases are rare, but they seem to happen all over the world, and never cease to amaze with the potential for what they mean and what could have been. A very bizarre and obscure report of a dead humanoid alien comes to us from the country of Sweden, and it is truly one of the weirdest.

The whole strange affair revolves around an intriguing report dug up by UFO researcher Ed Komarek, and originally made by a man named John Fontaine, supposedly published in the publication UFO Universe Magazine under the title Humanoid Dies In Sweden. Fontaine would claim to have met the witness at a UFO conference in Charlottenborg, Copenhagen, Sweden, in a lecture hall full of UFO and alien enthusiasts, and that the two had struck up a friendly conversation that made its way to the topic of alien humanoids. The man would then choose to launch into a very curious encounter and brush with the unexplained that he himself had had back in 1955, which would leave Fontaine awestruck and baffled.

The man said that at the time he had been working as a lumberjack in the town of Vestra Norrland, at the Gulf of Bothnia, along with his two brothers, where they toiled away shipping out lumber. On a calm morning in July, their attention was captured by a noise in the remote wilderness that sounded like “a big animal thrashing its way through the forest,” which was so insistent that the men were immediately on alert. As they gazed off into the murky trees, they caught a glimpse of what seemed to be a cigar-shaped object that was flying through the treetops to rain down branches and debris all over the place. At first, they thought that this was merely a small aircraft that had flown too low and had perhaps lost its wings, now in danger of crashing, and indeed they were sure that at any second it would come down in a fiery collision with the earth. However, things were about to get much more bizarre than that.

The craft seemed to come down at a nearby river that meandered through the area, after which there was no sound, but rather a sudden bright flash of light “like a vast flashbulb,” that was absolutely blinding in its sheer intensity. The witness would even claim that such was the incredible brightness of it all that they could actually see through the trees, as if through an X-ray machine, and all of this was followed by a kind of vacuum that seemed to pull them towards it. As they were sucked towards the source of the light they could see that leaves, branches, and everything else not nailed down was also flying towards whatever it was, and such was this inexorable pull that the men found themselves holding on to whatever they could to keep from being drawn towards that mysterious light, during which time the forest was bathed in complete, surreal silence.

Although the whole incident at the time seemed to last far longer, it was estimated that it was all over within a split second, after which the forest returned to normal as if nothing had happened. The men looked about them and crept forward through the brush towards that forbiding unknown, but they did not notice anything unusual, nor anything at all that would even suggest that anything odd had happened at all. Just as the puzzled crew were about to head back, one of them then noticed what he described as a “dwarf dressed in uniform” sprawled out on the ground in some bushes. As the three of them warily stepped closer they could see that there was indeed some sort of humanoid being lying there, and their first thoughts were that whatever had come down had crashed into the water and that this was an occupant who had been hurled out to safety.

The “dwarf” was described as being only around 4 feet in height, surrounded by “white light that vibrated like a halo,” and totally unmoving. They assumed it to be dead, but when they got closer still it snapped awake and recoiled from their touch, saying in perfect Swedish, “Do not touch me! It will only bring you difficulties! Now you know who I am!” The group were not sure what to make of this, and during the whole surreal incident they felt as if an unnatural calm had washed over them and they could now make out various details about this mysterious stranger. Fontaine would quote the witness as saying:

Suddenly I became quite calm and studied him closely. He was no dwarf. He was very well-built with broad shoulders and normal features. His skin was yellowish like that of an Asian. The eyes were deep socketed and black, without any white around. His face was badly bruised with a couple of big wounds on the chin and on the forehead. It did not bleed but the skin watered around the wounds. The top of his head was slightly downy and the hair almost white. The earlobes were one with the neck and resembled a shark’s fin. The lips were wrinkled, narrow and colorless. When he smiled reassuringly, which he did a lot, he revealed a row of small teeth in the upper as well as the lower part of his mouth. I especially noticed that his canine teeth were flat and as broad as two of our front teeth.

His hands were small with five slender fingers without nails and when he moved his hand it looked as if the ring finger had grown together to the little finger, if not they moved synchronized. His uniform was of a reddish metal and appeared glued to his body closely. Head and hands were free, but at the feet the clothing continued into a couple of closed shoes, size 35-37. The foot-soles were ribbed and vibrated, and for a moment I thought of caterpillars on a tank. The stranger looked at me and nodded slightly. There was no doubt that he knew what I was thinking. With those shoes he could roll forwards and backwards without moving his feet. Around the waist he had a broad silvery metal belt with an unusually large buckle, which shone slightly in a light-blue shade, which later when he was dead, turned dark blue. In the middle of the buckle was a sign in yellow — UV — it looked like a V which was incorporated in a U.

It was all a lot to take in, but as amazing as this all was there was a tragic air to it all, as the humanoid then let them know that he was gravely wounded and dying. He then produced a rectangular device with a pencil slate attached to it from his pocket, upon which he wrote something and tossed it out into the wilderness, telling the men that they should not touch it, and that it was meant to be a beacon to draw other of his kind to his location. The witness then claimed that he had talked with the creature for a full 2 hours as he lie there dying, although he seemed loathe to reveal what they had actually talked about. All he would reveal were certain details, such as that the entity claimed to have been from the constellation we call “The Eagle,” that several alien races had routinely visited humans over the centuries, and that many of them had been keenly observing us. He then jumped to the part where the mysterious stranger seemed to be dying, and before so instructed them to place his corpse inside a bag he gave them, saying that it would expedite the destruction of his remains to keep his existence secret. The witness says of the creature’s death:

Just before the stranger died, he gave me folded bag from the invisible pocket and said: “When I am dead, the light will disappear from my body and with the help of the other two men you shall put me in this bag and carry me out into the river where I shall disappear. Then you shall rinse yourself thoroughly in the water, so that you don’t get ill.” He was now breathing heavily, and I could see the end was near. The halo around him became weaker and gradually disappeared. His light blue buckle gradually got darker. He looked at me for a moment and smiled. The he said something in a language I have never heard before or since. Suddenly he switched into Swedish, and I got the last couple of sentences… “You have come without any wish to and depart against your own wish. Our life is like vapor.” He said a few more worlds, but his voice was so weak that I did not catch them. I am convinced he prayed to some deity before dying. I was very moved. 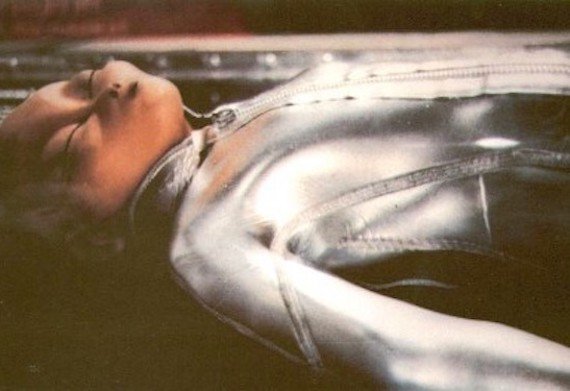 The witness and his brothers then gathered up the being’s corpse, stuffed it into the bag as instructed, and carried him off towards the roaring river, noticing how the body smelled intensely of Sulfur, the skin irritating their flesh. He would claim that the water began bubbling as they lowered the body into it, and that after 5 minutes the corpse had completely dissolved away into nothing. They would apparently go years without discussing the incident, and the witness claimed to Fontaine that that was the first time he had discussed it in decades. He then left in a rather mysterious fashion, showing him the pencil slate from that rectangular device, which he had kept as evidence of the encounter. Fontaine would say of this:

The witness produced a piece of metal and held it to my nose. “Look” he said. I looked bewildered. It resembled a bit crochet hook. “What is it?” He laughed knowingly. “A couple of days after the incident I wandered around where he had been lying. The rectangular object was gone, but the pencil slate was lying in the grass shining. I have kept it as a proof that I was not dreaming.” He left. And while I gazed astonished after him, he disappeared in the crowd. An anonymous, who with his story and pencil slate could hit the front page on the world’s newspapers.

What are we to make of all of this? This is a relatively obscure case, translated into English from Swedish and given by a stranger to a UFO researcher and told third hand, without anything in the way of evidence. Of course, there could be something to it all, but whatever truth there is to it all seems to have left with that enigmatic stranger at that UFO conference long ago, and we are left to merely speculate. Did this entity crash in his ship? If so, why was he here? Is there any truth to this story at all? There is sadly very little information on this obscure case out there, and whether it was true in any way or not we will probably never know for sure, and the secret to this all is confined to that wood in Sweden.