A New Case Against the Existence of a Planet 9

When we can finally get back to having family gatherings again (won’t that be a wonderful day?), three things that will still be (or perhaps even more) taboo to discuss are politics, religion … and the existence of a Planet 9 -- especially if the other party guests are still mourning and/or protesting the demotion of Pluto to dwarf planet status. This rule applies for Planet X or Nibiru as well – both of which can prompt saucer throwing of the plate kind. However, if you’re brave enough to test the subject, a new study may help defend the position of denial or doubt in the existence of Planet 9. Let’s get ready to rumble!

“We test whether the population of "extreme" trans-Neptunian objects (eTNOs) detected in the Y4 Dark Energy Survey (DES) data exhibit azimuthal asymmetries which might be evidence of gravitational perturbations from an unseen super-Earth in a distant orbit. By rotating the orbits of the detected eTNOs, we construct a synthetic population which, when subject to the DES selection function, reproduces the detected distribution of eTNOs in the orbital elements a,e, and i as well as absolute magnitude H, but has uniform distributions in mean anomaly M, longitude of ascending node Ω, and argument of perihelion ω.” 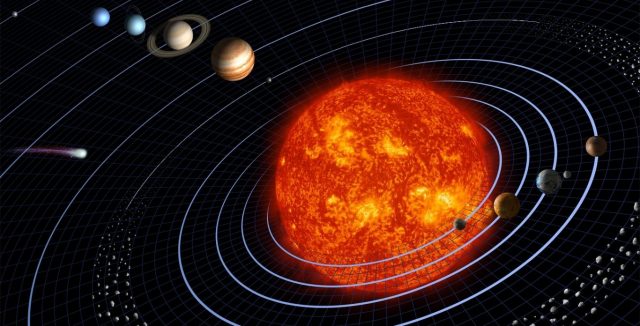 This opening argument comes from “Testing the isotropy of the Dark Energy Survey's extreme trans-Neptunian objects,” a new study submitted to the journal Astrophysics by Pedro Bernardinelli, a Ph.D. student at the University of Pennsylvania working on solar system science. Bernardinelli and his co-authors were using data from the Dark Energy Survey, a visible and near-infrared survey using the Victor M. Blanco Telescope in Chile. Over a six-year period from August 2013 to January 2019, DES imaged the southern sky multiple times in five photometric bands. They were primarily interested in extreme Trans-Neptunian Objects (eTNOs) – those large enough to be a planet that can exert gravitational pressure on smaller TNOs, forcing their orbits to be strangely aligned. Such an object should be bright enough to be picked up, travel large distances across the sky and be seen over multiple consecutive days – all good criteria for disqualifying just about everything out there … except for seven objects.

“The DES data taken on their own are thus consistent with azimuthal isotropy and do not require a "Planet 9" hypothesis. The limited sky coverage and object count mean, however, that the DES data by no means falsify this hypothesis.”

When the team modeled a population of 40 million TNOs and plugged in the real seven eTNOs, they found that their strange alignments could all have occurred randomly with no influence by a Planet 9. In four different cases, this was the result – although they note that the fourth case, using only 3 eTNOs, it was hard, but not impossible, to randomize the alignment.

Will this win an argument with your uncle who strongly believes there’s a giant planet beyond Neptune? Probably not, since the study uses a very small sample in simulations, not actual images from a spaceship like New Horizons or an extremely powerful telescope with a panoramic view. Still, it’s probably strong enough to produce a stalemate, allowing you to turn the discussion to something less controversial – like sports.

Until then, practice social distancing, wear a mask and hide your saucers.

Animals of the Time Traveling Kind?