A Strange Case of a Mermaid in Scotland

For centuries a very popular tale told by people of all walks of life is that of mermaids, those half-human, half-fish creatures of myth and lore. There are countless accounts of mermaids throughout history, both clearly mythical, but also those that have a ring of some reality to them. Explorers have written in their journals of spotting these creatures, there are various supposed eyewitness reports, and it all leaves one to wonder just how much is fantasy and how much has any basis in truth. One very interesting historical account of mermaids is one that supposedly happened on an island in Scotland, and even apparently involved a body.

Our tale here originates in the windswept wilderness of the island chain known as the Outer Hebrides, which lies off the west coast of Scotland and is variously called the Na h-Eileanan Siar, Na h-Eileanan an Iar, and Innse Gall, meaning "islands of the strangers.” The islands are already known for their numerous prehistoric structures and long history, being notable as the headquarters of historic clan chiefs such as the MacLeods, MacDonalds, Mackenzies and MacNeilsbut. Yet among all of the tales and history is a very strange account of what seems to have been an actual mermaid.

In 1830, a group of locals was at work cutting seaweed on the west coast of the island of Benbecula, at a place called Sgeir na Duchadh. At some point it was spotted a strange sight swimming about in the cold grey, churning sea, which looked like “a woman in miniature” cavorting about in the water. Whoever or whatever it was seemed to be perfectly comfortable and at ease in its environment, swimming about with great skill and agility and performing somersaults, and when the crowd gathered to watch this odd sight several men tried their best to catch the creature. One report reads:

Some seventy years ago, people were cutting seaweed at Sgeir na Duchadh, Grimnis, Benbecula. Before putting on her stockings, one of the women went to the lower end of the reef to wash her feet. While doing so she heard a splash in the calm sea, and looking up she saw a creature in the form of a woman in miniature, some few feet away. Alarmed, the woman called to her friends, and all the people present rushed to the place. The creature made somersaults and turned about in various directions. Some men waded into the water to seize her, but she moved beyond their reach.

Whatever she was, this mysterious stranger managed to elude them gracefully and effortlessly, and then it is said that a boy threw a stone that hit her squarely on the head, eliciting a cry of pain, after which she disappeared beneath the frothy waves. The onlookers watched that expanse of sea for some time, but whatever it was did not appear again and they then went back to work upon that rocky shore. A few days later, something very bizarre washed up on shore just a couple of miles north, at a place called Culle bay, near the township of Nunton. A report would describe it thusly:

The upper portion of the creature was about the size of a well-fed child of three or four years of age, with an abnormally developed breast. The hair was long, dark, and glossy, while the skin was white, soft, and tender. The lower part of the body was like a salmon, but without scales. Crowds of people, some from long distances, came to see this strange animal, and all were unanimous in the opinion that they had gazed on the mermaid at last.

A Mr. Duncan Shaw, who factor for chief MacDonald of Clanranald, baron-bailie, and sheriff of the district, was called in to investigate, and he too believed it to be a real mermaid. Not knowing what else to do, Shaw ordered the body to be wrapped in a shroud and placed in a specially made coffin, after which it was then supposedly buried right there on shore not far from where it was found, the funeral attended by numerous islanders. Unfortunately, if there was ever a gravestone or marker it is long gone, and considering the popularity of the story there have been many who have speculated that there are indeed the remains of areal mermaid still out there buried. 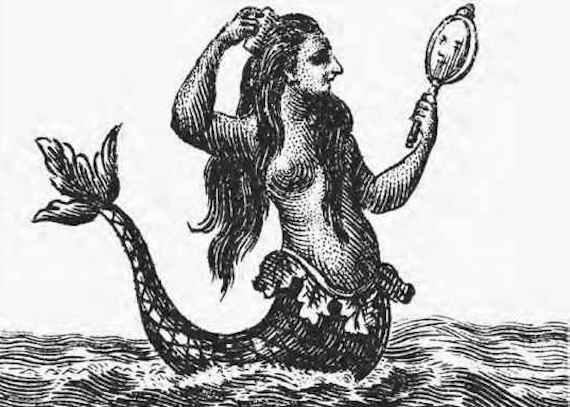 The problem with the tale is that the locations are incredibly vague. We know that it supposedly happened at a beach at Culle bay, but there are absolutely no details at all as to where. There are many beaches here, so considering that no landmarks are given in the tale and any grave marker that may have existed is gone, it could be anywhere. Over the years there have been several teams who have claimed to have located the mysterious mermaid's grave, but they have so far turned up nothing, and one is left to wonder if there is anything to this tale or if it is just a colorful piece of lore. Interestingly, there would be other mermaid accounts from around the same time, such as in 1833, when fishermen in the same general vicinity supposedly captured a creature with “a face like a monkey and the torso of a woman,” which they kept alive for 3 hours before releasing it back into the sea. Some other reports were given in the Paisley Herald & Renfrewshire Advertiser in 1869, which reads:

Mermaids were quite common on the coast of Caithness as late as 1809, the common people used to see them frequently; but besides their testimony we have that of witnesses of the highest respectability, Miss Eliza Mackay, daughter of the minister of Reay, saw one while she was walking with her friend Miss Mackenzie, on the shore, and she wrote a full and particular account of it to Mrs Innes, dowager of Landside.

While out walking these young ladies observed three people on a neighbouring rock exhibiting signs of terror, and on going to them found that they were looking at a human figure floating in the water, and rising and falling with the swell of the sea, showing its head, neck and arms. Its complexion was brilliant, its fingers long and slender, and its eyes grey; the hair was long, greenish coloured, and oily, and was sometimes washed over its face, at which times it threw it back with its hand; it also repeatedly waved its arm to drive away the seagulls which hovered about it. They watched it for above an hour in bright sunshine within a few yards.

The bay of Reay appears to have been a favourite place for the toilets of these mermaids, in spite of its northern aspect, for Mr William Munro, schoolmaster of Thurso, in confirmation of the stories of these two young ladies, deponeth that while living at Reay he saw a mermaid combing her hair, which in this specimen was long and brown. He would have taken the form to be human had it not been for the danger of the place. He watched her closely for a short time, in bright sun, close by, but she at last observing him, plunged into the water, dived and disappeared.

Whether mermaids could have ever possibly existed in any way or not remains contested and debated, and grain of truth to it all still not fully understood. Yet the stories persist. What happened on that beach in Scotland all of those years ago? Was this some sort of misidentification or was it real? Or was it merely a piece of fantastical folklore that has been passed off as a possibly real historical account? It is unclear, but it certainly fires the imagination, and adds to the already considerable amount of history on these denizens of the deep.