Ancient Warriors of the Supernatural Variety

In October 1995, the U.K.'s Cannock Mercury newspaper reported - in a slightly tongue-in-cheek fashion - on a series of very weird events that were then occurring in the midst of Beaudesert Old Park, which is situated very near to an ancient hill-fort called Castle Ring. Home to a camp for both scouts and guides, Beaudesert was the site of repeated, strange activity in the late summer and early autumn of 1995. Not only that, but a group of scouts was going to stake-out the area in a careful and dedicated bid to hopefully try and get to the bottom of the mystery, once and for all. The Mercury noted: "Wardens and assistants have reported strange noises, screams and eerie goings-on around the camp." Indeed, they had, including encounters with a dark-cloaked figure and a ghostly child roaming the woods and haunting the roads. Steve Fricker, the assistant-leader of the 2nd Rugeley Hillsprings Scouts related at the time: "It is said that the ancient horsemen of old are now seeking revenge for the disturbances they have had to face for several years from these excitable youths." The newspaper added: "Scouts will be camping out to 'confront' the spirits and attempt to restore peace. They will be staying awake from Saturday evening (October 28) until dawn on Sunday, entertained by wardens' tales of the hauntings." Ultimately, however, the "horsemen of old" did not make a showing. There is, however, a very similar case to this one.

A respected authority on prehistory, R.C.C. Clay, had just such an encounter while driving at Bottlebrush Down, Dorset - an area strewn with old earthworks - during the winter of 1924. The story, however, did not surface until 1956. That was when Clay shared the details with a man who had an interest in matters relative to ghosts and specters. That man was James Wentworth Day, an unlikable, racist, homophobe with fascist leanings, who penned such titles as Here are Ghosts and Witches, A Ghost Hunter’s Game Book, In Search of Ghosts and They Walk the Wild Places. The location of the extraordinary event that Clay related to a captivated and enthralled Day was the A3081 road, between the Dorset villages of Cranborne and Sixpenny Handley, on farmland known locally as Bottlebrush Down. It was while Clay was driving home, after spending a day excavating in the area, and as the daylight was giving way to the magical, twilight hours, that he encountered something extraordinary. Maybe even beyond extraordinary. 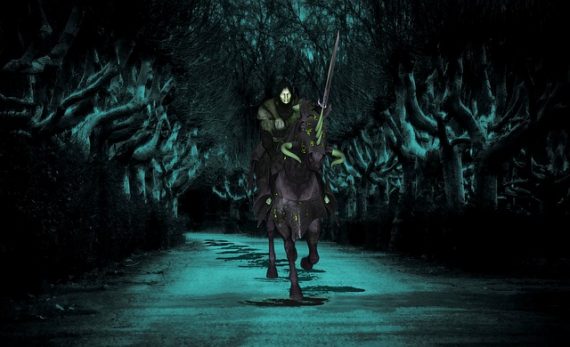 At a point where the new road crossed with an old Roman road, a horseman, riding wildly and at high speed on the back of a huge and muscular stallion, seemingly appeared out of nowhere. But there was something wrong about this man, something terribly wrong. In Clay’s very own words to Wentworth Day: "I could see that he was no ordinary horseman, for he had bare legs, and wore a long loose cloak. His horse had a long mane and tail, but I could see neither bridle nor stirrup. His face was turned towards me, but I could not see his features. He seemed to be threatening me with some implement, which he waved in his right hand above his head." Clay came to believe that what he had encountered was the spirit form of a Bronze Age hunter and his horse.

Good mate Neil Arnold, the author of numerous books on unsolved mysteries of the Fortean type, has also come across a number of accounts of what appear to be ghostly figures from centuries long-gone. Neil told me a fascinating story: "I’ve always wondered what type of manifestation these U.K. 'wild men' could be. In the autumn of 2011 a psychic lady who I know as a friend and who I trust - I don't often have any interests in psychics - accompanied me to Blue Bell Hill, which is a very haunted village in Kent, a few miles short of the town of Maidstone. I knew of several obscure 'man-beast' reports in the area which she knew nothing about. I took her to one particular spot, near some ancient stones, hoping she'd pick up a ghostly presence and she said she felt nothing whatsoever, but she did state quite categorically that a few years previous, around 2003 she'd had a bizarre encounter in the area one night." 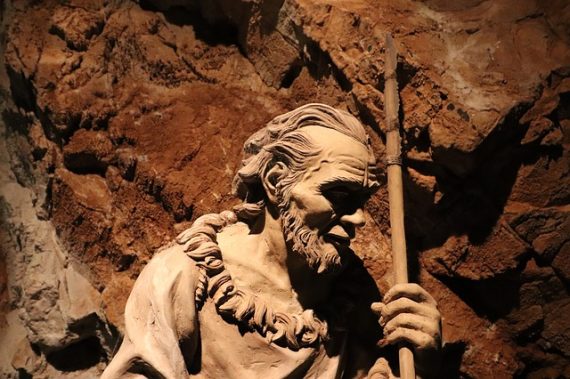 Neil got to the heart of the eerie account: "She had visited Kits Coty House - a set of ancient stones - with a group of fellow psychics. Her friends were over on one side of the field which harbours the stones and she was in another area when she noticed someone walking towards her a few hundred yards away. The figure seemed to be striding rather aggressively and was coming from the direction of a thicket which runs alongside the field. The woman, whose name is Corriene, stated that from a distance the figure appeared huge in build and covered in hair and she sensed it was not 'real' but gave off an air of malevolence. The figure marched towards her and she could see it had long hair and a beard, covering most of its face. The hulking figure was taller than six feet and appeared to have a loin cloth around its waist and furred boots. No one else saw this figure, but I was intrigued as I knew that in the past several witnesses had come forward to say they'd seen similar figures in woods within miles of Blue Bell Hill."

Neil had more to say: "I began to wonder if people had seen, from a distance, some type of ghostly primitive man - long hair, bearded, muscular, animal fur around the waist...Blue Bell Hill and much of Kent is steeped in history. So, maybe, people were seeing some type of Neolithic hunter. Corriene was intrigued by what I said and then, rather startled, mentioned that on another occasion whilst in the area of the stones she’d seen several of these people who she felt were not aggressive, and although armed with spears were simply guarding the area and stooping low in the bushes, curious as to what they were seeing." Neil wrapped things up in concise and thought-provoking fashion: "I believe Maureen one hundred per cent, but I strongly believe this figure was some type of elemental [or] spirit. I also believe this figure could have been a Neolithic type of hunter."