“I was asleep and I woke up because there was an entity that was specific to the location – to New Orleans. It was something that I’d never seen exactly like this before. And it was this female figure and it opened its mouth and it had rows and rows and rows of teeth."

The thing with at least three rows of sharp teeth appeared to someone who claims to have seen her share of strange demons – Rachel (R.H.) Stavis, whose name and story popped up in the news this week … possibly because the world is looking for something scary to distract it from the coronavirus epidemic. She appeared recently on Chris Jericho’s Talk is Jericho podcast to promote her book, Sister of Darkness: The Chronicles of a Modern Exorcist. This particular alleged encounter with a demon is interesting for a number of reasons, starting with the fact that it occurred to Stavis herself – not to someone else she was exorcising. Then there’s this:

"It was on me. And here’s where things get nuttier. Out of the side of the room, out of the darkness, comes this man, a huge man with long dark hair that was over his face. And he took this thing, put it into his hands and walked backwards into the shadows. And it was gone." 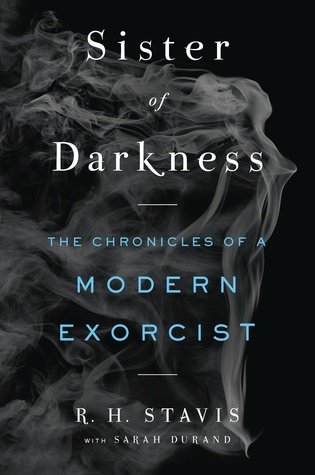 A nightmare coupled with sleep paralysis? When she could move, Stavis says she noticed the power was out in the room and, when she went outside, for at least the entire block. Checking with the power company, Stavis says she found the power went out exactly when they saw the toothy demon. They?

"And I was like, ok, and I had my significant other there and she was like ‘I just saw this thing with teeth and a face’.”

It would be easy to dismiss her experience as a possible power-surge-power-outage-induced hallucination … except that her partner claimed to have seen it too. Is this a made-up story just to sell books or generate more exorcism business? One might suspect that, but Stavis is already a successful screenwriter for film, television, and video games, and an author of four horror novels under the name R. H. Stavis. And, when it comes to exorcisms, she performs them for free.

“From my experience, I believe that an entity attaches itself or burrows into a person’s body and feeds off them. It lives off their fears, depression, anxiety, and a host of other negative energies and emotions. They may have had this entity with them for ten years or ten days, but it’s interfering with their lives and until it’s gone, things aren’t going to get better. That’s when they find me.”

In an article in Reader’s Digest, Rachel Stavis sounds like someone who could be working 24/7 these days. Although she claims she’s been able to see demons since she was a child, she didn’t begin performing exorcism until she was 31 (about 9 years ago). She depicts the demons that she claims are in 99 percent of all humans as energy-sucking entities rather than evil beings after one’s soul, which explains why she calls herself a nondenominational exorcist. However, that doesn’t mean removing these energy demons is like letting the air out of a balloon.

“When a client comes over, I take them out back to my Spirit House, which is where I work even when I’m not performing exorcisms. Los Angeles is an expensive place to live, and for me, even more so because exorcisms have to occur in a space with a separate entrance. My work is dangerous, and I don’t want to subject my pets—or my home—to other people’s low frequencies or the dark energies of entities during an exorcism.”

She’s worried about her pets getting possessed? OK, she’s in L.A. and she does a lot of celebrity exorcisms, so it comes with the territory. Stavis is also pretty confident in her ability.

“Most last about an hour, however, and all end with the glorious destruction of an entity.”

That’s not much to create a movie plot, so Stavis may have to use her own toothy, touchy, female demon story for a screenplay. She may also want to dig a little deeper into what the local utility blamed the power outage on. In any case, Rachel Stavis is an interesting combination of paranormal rarities – a female, nondenominational exorcist who claims she can help everyone and doesn’t ask for anything in return.

That sounds like someone we could ALL use these days.

Monsters of the Real-Life Kind