In an article titled "Devil Dogs: The Mysterious Black Dogs of England," Andy Wright says: "Tales of monstrous black dogs, often with glowing red eyes, abound worldwide, but especially in England. Black Shuck is a popular one, but many regions have their own versions. They’re called The Gurt Dog, Padfoot, Barguest, The Hairy Hound, The Yeth Hound and the Grim, among other names. In the Isle of Man they’re called a Moddey Dhoo ...Black dog legends inspired Sir Arthur Conan Doyle’s 'The Hound of the Baskervilles' and a Grim makes an appearance in 'Harry Potter and the Prisoner of Azkaban.' A cursory search will reveal numerous Black Dog Pubs, Black Dog Restaurants and Black Dog Inns scattered across England." For the most part, the Devil Dogs - or Phantom Black Dogs, as they are also known - that Andy describes in his article are ones that were seen centuries ago. It's a far less known fact, though, that encounters with these supernatural dogs have been reported well into the 20th century, as we shall now see.

Late one evening in the early weeks of 1972, a man named Nigel Lea was driving across the Cannock Chase (a large forested area in central England, and a magnet for paranormal activity) when his attention was suddenly drawn to a strange ball of glowing, blue light that seemingly came out of nowhere. It slammed violently into the ground just a short distance ahead of his vehicle and amid nothing less than a veritable torrent of bright, fiery sparks. Needless to say, Lea quickly slowed his car down to what was almost the proverbial snail's pace. And, as he cautiously approached the approximate area where the light had seemingly fallen, Lea was both shocked and horrified to the absolute core to see looming before him what he described as "...the biggest bloody dog I have ever seen in my life." 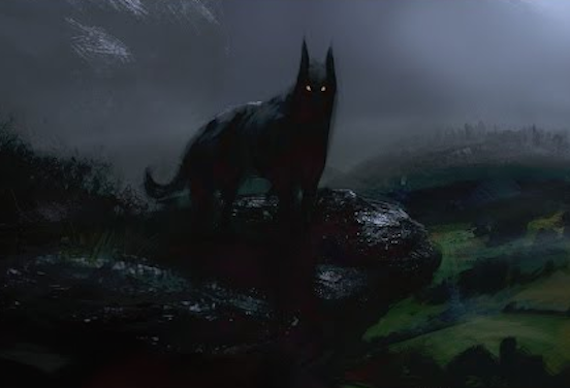 Very muscular and utterly black in color, with a pair of large, pointed ears and huge, thick paws, the immense dog seemed to positively ooze both extreme menace and overpowering negativity, and had a crazed, staring look in its yellow-tinged eyes. As a very brief aside, the color of the eyes is interesting, as most of the Phantom Black Dogs are described as having glowing, self-illuminated red eyes. Back to the story: For twenty or thirty seconds, or thereabouts, both man and beast squared off against each other in classic stalemate fashion. That is, until the animal slowly and carefully headed for the darkness and the camouflage of the tall, surrounding trees, not even once taking its penetrating eyes off of the petrified driver as it did so.

Somewhat ominously, and only two or three weeks after the encounter, one of Lea's closest friends was killed in a horrific factory-based environment in the West Midlands town of West Bromwich. Lea's friend was caught in machinery and killed practically immediately. Today, Lea firmly believes - after having deeply studied the history of the Phantom Black Dogs, and almost to the point of obsession - that the death of his friend was connected to the encounter on the Cannock Chase with that supernatural hound. Notably, there was another 1972 case of one of these strange and sinister creatures. In this case, the date was April 19, 1972. The location was Gorleston, Norfolk, England. The witness: Graham Grant who, at the time, was a coastguard in the area. Grant watched with amazement the huge black dog race across the local beach - that is, until it quite literally vanished before his eyes. 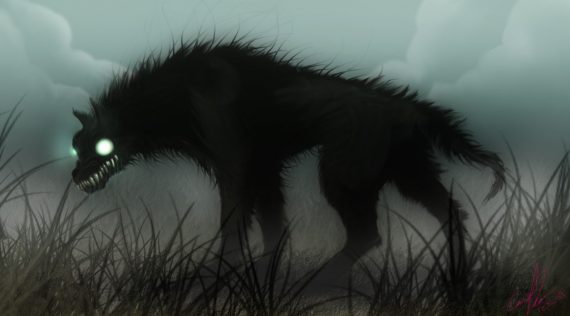 In the early-to-mid 1980s,  surreal and sinister reports began to surface of a creature that became known at a local level as the Ghost Dog of Brereton – a reference to the specific area of Staffordshire, England from where most of the sightings originated. Brereton once had its very own identity; but today it is considered to be a part of the town of Rugeley – or Rudgeley, as it was originally known, according to the Domesday Book, and which translates as "the hill over the field." The local newspaper, the Cannock Advertiser, ran an article on the growing mystery. In response, a woman named Sylvia Everett replied to the Advertiser's request for witnesses to the creature to come forward. She wrote:

"On reading the article my husband and I were astonished. We recalled an incident which happened in July some four or five years ago driving home from a celebration meal at the Cedar Tree restaurant at about 11:30 p.m. We had driven up Coal Pit Lane and were just on the bends before the approach to the Holly Bush when, from the high hedge of trees on the right hand side of the road, the headlights picked out a misty shape which moved across the road and into the trees opposite. We both saw it. It had no definite shape seeming to be a ribbon of mist about 18in. to 2ft. in depth and perhaps nine or 10ft. long with a definite beginning and end. It was a clear, warm night with no mist anywhere else. We were both rather stunned and my husband’s first words were: 'My goodness! Did you see that?' I remember remarking I thought it was a ghost. Until now we had no idea of the history of the area or any possible explanation for a haunting. Of course, this occurrence may be nothing to do with the 'ghost dog' or may even have a natural explanation. However, we formed the immediate impression that what we saw was something paranormal."