Giant-Sized UFOs in the Skies

UFOs come in all sorts of shapes: flying saucers, cigar-shaped craft, flying triangles, and rocket-like vehicles. And that's just the start of it. There is also the matter of the sizes of some of these craft. Indeed, there are a number of cases that suggest at least some UFOs are massive in size. And that's what today's article is all about. With that said, let's take a look at some cases that fall into that giant-sized category. As its staff state: "The Civil Aviation Authority (CAA) is responsible for the regulation of aviation safety in the U.K., determining policy for the use of airspace, the economic regulation of Heathrow, Gatwick and Stansted airports, the licensing and financial fitness of airlines and the management of the ATOL financial protection scheme for holidaymakers." Over the years the CAA has received more than a few UFO reports, which is hardly surprising. Let's take a look at one such CAA report that is focused on a UFO of huge proportions. The summary of the report reads as follows: "12 Jun 82 Dinkelsbuhi – Large translucent object 500 feet long at 41,000 feet. ATCC [Air Traffic Control Center] requested subject aircraft to investigate this object which was found to have the form of a double rectangle surmounted by a globe (egg shape) crowned by a silver cone. Object observed by all on board." 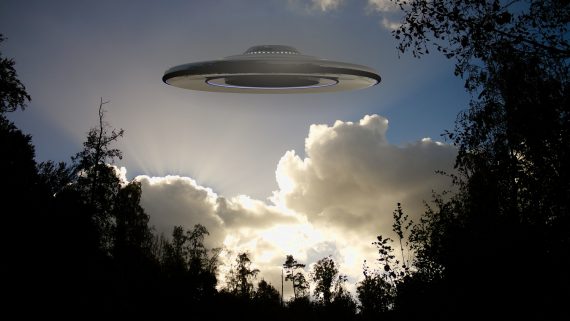 Now, let's take a leap back to the 1950s. On the morning of April 4, 1957 – according to now-declassified British Royal Air Force documents housed at the National Archive, Kew, England – radar operators at Balscalloch, Scotland reported to RAF West Freugh, Wigtownshire that they had detected a number of "unidentified objects on the screens of their radars." And it quickly became apparent this was no Cold War penetration of British airspace by Soviet spy-planes or bombers. As the mystified radar-operators watched their screens, they were amazed to see a large, stationary object hovering at 50,000 feet that then proceeded to ascend vertically to no less than 70,000 feet. According to the files: "A second radar was switched on and detected the object at the same range and height." Most significant of all at this stage was the assessment by the radar experts of the incredible proportions of the UFOs: "It was noted by the radar operators that the sizes of the echoes were considerably larger than would be expected from normal aircraft. In fact they considered that the size was nearer that of a ship’s echo."

Consider this case from 1951, which is described in the files of Fort Monmouth, New Jersey: "“On September 20, Andrew J. Reid G-2 [Army Intelligence] Ft. Monmouth, NJ, provided following report of unconventional aircraft observed by radar at above Army installation. On Sept 10, fifty one], an AN/MPG-1 radar set picked up a fast moving low flying target, exact altitude undetermined at approximately 11:10 a.m., southeast of Ft. Monmouth at a range of about twelve thousand yards. The target appeared to approximately follow the coast line, changing its range only slightly but changing its azimuth rapidly. The radar set was set to full aided azimuth tracking which normally is fast enough to track jet aircraft, but in this case was too slow to be resorted to. Target was lost in the N.E. at a range of about fourteen thousand yards. “This target also presented an unusually strong return for aircraft, being comparable in strength to that usually received from a coastal ship. The operator initially identified target as a ship and then realized that it could not be a ship after he observed its extreme speed."

In 1952, radar operator William Maguire had an extraordinary, radar-based UFO encounter in 1952. It was while he was stationed at Royal Air Force Sandwich in Kent, England. Of his experience, Maguire said: “The mechanics were being blamed for not calibrating the instruments properly; we were being blamed for not interpreting the readings properly. But the obvious answer staring us in the face, on every single instrument on the base, was the fact that there was sitting up at an unbelievable height, this enormous thing with the equivalent mass of a warship." Similarly, there are the words of John Oliver, who had his encounter with a huge UFO in 1949. Once again, it was a radar-based encounter. He recalled: "The general consensus regarding its size, among the very experienced radar personnel engaged in the operations, was that the object offered an echo similar to that of a large passenger or freighter surface vessel, something in the region of 15,000 or 20,00 tons."

Definitive Mother-Ships? Don't bet against it.

The Mysterious Tale of a Humble Farmer, a Ghost Room, and his Amazing Spirit Machine