There was a time not so long ago when movie theaters were filled with people being scared out of their wits – remember those days? Some say they began in the summer of 1975 when a young director by the name of Steven Spielberg released what is now considered to be the first blockbuster: “Jaws.” These days, people who would be filling cinemas are instead staying home and being terrified by a bummer blockbuster known as the coronavirus. That is, except for one family in Canoga Park, California, whose home is haunted by the ghost of child actress who appeared in the “Jaws” sequel, “Jaws: The Revenge.” That story is in the news this week because the house were the 10-year-old actress was murdered is featured on a new show about remodeling and possibly exorcising famous murder houses. Have we gone from great scary movies to flipping murder scenes? 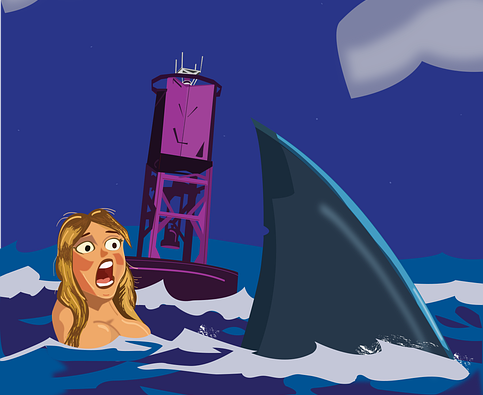 "I started having an imaginary friend named Joseph. He would open and close the garage door when my dad would come home and turn off and on the lights. We came to find out the killer's name was actually Joseph."

Gaby Bernal was ten in 2001 when her family moved into the home where 10-year-old Judith Eva Barsi was murdered in 1988 by her father, József (Joseph). Judith Barsi appeared in commercials and television series before taking a leading role in “Jaws: The Revenge” as Thea Brody, the daughter who is almost eaten by a shark. Judith was earning an estimated $100,000 per year as a child actress, which allowed her family to buy the house in Caonga Park. Unfortunately, József abused both Judith and her mother and on July 25, 1988, shot and killed both, then soaked their bodies in gasoline and set them on fire before killing himself. No surprise there’s at least one ghost and a lot of weird happenings in this house, right?

"I didn't sleep last night at all. I felt like someone was watching me. Stuff like that makes it very real and scary and very unsettling."

The house was cleaned, repaired and eventually occupied again, with the Bernal’s being the latest owners. However, they didn’t know about the murders when they bought it. Poor Gaby didn’t know she was sleeping in the very room where Judith was murdered until a neighbor told them. Gaby still lives in the house and still sleeps in the same bedroom, although she has recurring nightmares and refuses to sleep facing the window – the same position Judith was in when she was murdered. Gaby’s parents have also felt a mysterious presence in the house. Why do they still live there? Well, it’s nice, and who wants to buy a haunted house? What else could they do?

“You can just tell there’s so much love in this house, but at the same time this house has taken an extreme toll on Gaby and her family.”

Enter interior designers Joelle Uzyel and Mikel Welch, the stars of Murder House Flip, a new show on the streaming service Quibi which finds properties that have been the site of notorious murders and brings in designers, paranormal experts and brave construction crews to chase out the ghost s and make the homes livable for their owners. After checking thing out, Uzyel and Welch redesign the hallway where the mother was murdered, gutted the bedroom, replaced the window with glass doors, and changed the backyard.

The end results? You’ll have to watch Murder House Flip to find out. To their credit, the producers of the show aren’t in it to make a profit. As executive producer Josh Berman puts it in People:

“(The show is meant to bring) healing and solace to families living in the aftermath of tragic events by transforming dark places into healthy spaces.”

Let’s hope it brings the ghost of Judith Barsi to a better place as well.

Ancient Warriors of the Supernatural Variety