It’s never a good sign when living creatures mysteriously fall dead from the sky. It’s a worse sign when they fall dead on the deck of a cruise ship – a place that has a challenging time protecting passengers from non-mysterious phenomena, let alone things that might kill them or creatures flying above it. It’s always a bad sign when something like this happens and crew members are told to keep it quiet. Put these all together and you have the situation on a yet-unidentified cruise ship where hundreds of dead birds were found on the deck this week. Throw in fears of coronavirus and 5G and you have the makings of a mystery, a cover-up and a conspiracy all rolled into one.

"It was a beautiful night and we couldn't believe our eyes when we woke up this morning and see so many dead birds all around the ship's open deck."

That’s the frightening comment of an anonymous crew member on the unnamed ship who posted a clandestine video of the scene – hundreds of dead birds on the deck and the stairs. (Watch the gruesome video here.) On the same website Crew Center (run by ex-crew members sharing their experience and Insights about life and work on cruise ships), another crew member shared this:

“We wake up with announcements asking to not go to the open decks. To not touch the birds, and to feed them. I thought that the poor birds we’re alive and I didn’t went there. I love animals and I didn’t want to see them and couldn’t help in anything. I still can’t stop to cry and nobody give reasonable explanation”

According to Crew Center, the rest of the crew was stressed and claimed this was the first time they’ve see something like this happening on a cruise ship. The dead birds were quickly removed and the decks were cleaned. As expected, the comments on Twitter and YouTube asked questions and demanded answers. The biggest were why would anyone still be traveling on a cruise ship during the coronavirus pandemic and why are these lines still in operation. That’s obvious – disbelief and money. Also, the incident took place on April 24, but there’s still no other reporting of it, especially the name of the ship and line. Cover-up? 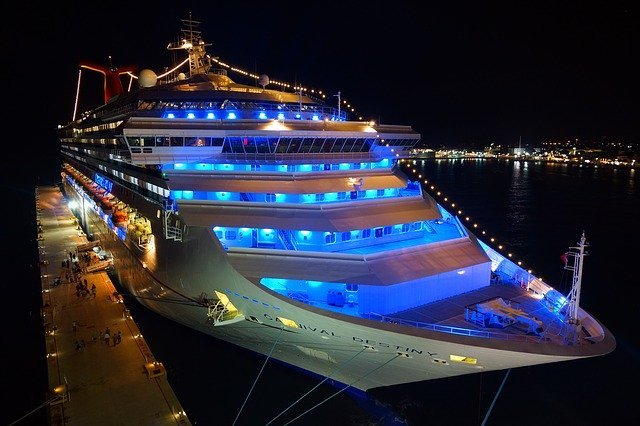 “Cruise vessels in New Zealand waters are being asked to dim their night lighting to avoid dazzling seabirds after a flock of Buller's Shearwaters ended up flying into the Pacific Jewel last year. The move comes after about 70 birds ended up stunned on the deck of the vessel, and some died or were injured after the crew boxed them up together in some large boxes and delivered them to the Department of Conservation (DOC) once the ship berthed in Auckland.”

One possible answer to the mystery is bright lights left on at night. After an incident in January 2019, New Zealand asked cruise ships and fishing vessels to dim their lights because they can confuse birds, especially young ones who have not yet learned the dangers of flying around big boats. Apparently this is nothing new – a study was published in 2011 in The Wilson Journal of Ornithology blaming cruise ships on avian mortality during fall mating season. However, this is spring. Could the cause be something else?

“Ship communications close to shore and in ports will be revolutionised by the introduction of 5G connectivity this decade, with 5G networks already operating within major port cities worldwide. There are firm plans to roll out this technology across other cities with coverage over ports and coastal waters.”

Ah yes, the villain of the moment – 5G. Many comments try to link these bird deaths to 5G communications, the rollout of which is being blamed for everything but especially the coronavirus – a link that is all smoke and no matches. An article on the Riviera Maritime Media website points out that 5G will allow improved communications onboard ships when they’re near 5G hotspots. The Audubon Society, which cares about birds, investigated this conspiracy theory and found no scientific evidence to support it.

So, what killed the birds on this boat? Confusion caused by bright lights seems to be most likely. Why the mysterious cover-up? The cruise industry is obviously struggling and doesn’t need any more bad news. However, what could be worse that continuing to avoid a policy of honesty?

Perhaps these dead birds are a different kind of canary in the coal mine.

When Aliens Get Dangerous and Sometimes Deadly