“Large Wildcat” On The Loose in Cambridge, England

A man in Cambridge, England, managed to get a photograph of a “large wildcat” far bigger than any species of cat he’s ever seen in the wild. Since this is Cambridge, the speculation immediately turns to the legendary “Fen tiger” of local mythology. What did he photograph … and why doesn’t the witness want to reveal his identity?

"Looking at the tail it's definitely a different species. It is a wild cat but not that species I don't think. The animal was a brown and black colour with a very long tail that had lots of black circles on it. The tail was so long, and its legs were thick as well with big claws. It was about the size of a fully grown Labrador dog."

The witness saw the cat on the morning of April 11 (a Saturday, a little after 8 am) and immediately tried to notify the wildlife trust but “because of the pandemic everything has to be done through email so I have sent one and I'm waiting for a reply." He then shared the photograph and his account with CambridgeshireLive, along with his size estimate.

"It was about the size of a fully grown Labrador dog." 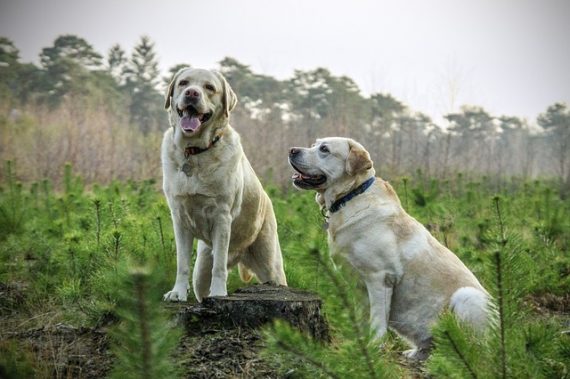 Since the Labrador retriever is England’s favorite big dog, everyone knows that’s a pretty big cat – possibly between 65 and 80 pounds (29–36 kg) and standing about 22 inches tall. The witness saw the “wildcat” near the University of Cambridge campus where he lives and works. (See the photo here.)

"Initially, I thought it was a wildcat like a Felis Silvestris [the European wildcat], but then I went to my colleagues at the university, and they said it can't have been as this animal was way bigger.”

They’re right about that. European wildcats generally weigh only 11 to 18 pounds (5–8 kg) and are much smaller than a Labrador. However, the creature in the photo is definitely a cat with a long tail. The witness made two interesting observations: " … its legs were thick as well with big claws” and “I think it somehow keeps coming to this place to hunt rabbits or other small animals." The cat in the photo is pretty far away – how did he know it had “big claws”? And, if it “keeps coming to this place,” he’s implying that he’s seen it before. Has anyone else? Cambridge University is a pretty busy place … although it’s probably under coronavirus lockdown and the incident happened on a Saturday. Then again, any sighting which might be the elusive “Fen tiger” should bring people out regardless of the lockdown.

With the large number of ‘alien big cat’ sightings in England, one needs to have a ‘hook’ in order to get a name. in the case of the ‘Fen tiger’, the name ‘Fen’ comes from the Fens or Fenlands, a former marshy area on the coast of eastern England that kings and their engineers have tried to drain for farming while locals who depending on the marches for their livelihood (fishermen, fowl hunters) fiercely fought against it, earning the name Fen Tigers. Of course, the Fen Tiger eventually lost the fight but earned their place in history. Recently, the Great Fen Project has worked to return parts of the Fens to their pre-agricultural state. The name also became the title of a novel by Catherine Cookson, the nickname of a boxer -- British Lightweight Champion Eric ‘The Fen Tiger’ Boon -- and of professional darts champion Peter ‘The Fen Tiger’ Evison.

OK, now we know about the name … what about the sightings?

According to the BBC, sightings began in 1982 in Cottenahm. The first video of an alleged Fen Tiger was taken in 1994 and lasted two minutes. That convinced the British Big Cat Society it was "almost certainly a large cat-like animal.” Large cat creatures have been reported all over the Fens area since then, but no one has been able to capture or explain it. CambridgeshireLive did its due diligence and located the owner of the shed in the photo. Sid Lydon says he doubts it was a big cat because his pet Staffordshire Bull Terrier would have been outside at that time and barking at it – something he claims he didn’t hear on the morning of April 11. While he suggested it might be one of his pet cats, the feline in the photo looks far too big to be a housecat.

Until it’s identified, the legend and mystery of the Fen Tiger continues.