Massive Meditation Event May Have Been Seen on Earth Frequency Measurements

Did you feel something on April 4th? Maybe a movement in the air … or a strange tingle … or a subtle vibration … or something you just couldn’t quite place, but you knew it was happening? So did research stations monitoring the Schumann resonances -- extremely low frequency peaks in the Earth's electromagnetic field spectrum generated and excited by lightning discharges in the cavity formed by the Earth's surface and the ionosphere. But on April 4th, the low frequency spikes may have been made by a mass mediation in the minds of millions around the world trying to end the coronavirus pandemic. Wait … what?

“Let's all come together and laser beam our focus on global peace and healing! A Mass Meditation is being organized for April 4, 2020 at exactly 10:45 pm EST (eastern standard time U.S.) for 20 minutes and we need you to help us mobilize the greatest army of meditators this world has ever seen! Together we will create MIRACLES by joining together as One Mind, One Heart at the precise moment of the Jupiter/Pluto conjunction which is 10:45 pm April 4th Eastern Standard Time (New York, United States), to anchor in these high vibrational energies and direct them using our Laser Focused Group Intention on the healing of humanity!.”

Prior to April 4th, 2020, a number of websites and YouTube channels promoted a worldwide mass meditation event attempting to harness the Maharishi Effect – a paranormal effect on the normal world, first promoted in the 1960s by Maharishi Mahesh Yogi, where a large number of people practicing Transcendental Meditation simultaneously could have an effect on the local environment. While the physical and psychological health benefits have been proven scientifically, the Maharishi Effect has not. Does this spike in the Schumann resonances change that?

“Since April 4-5, there has been a peak in the Earth's geomagnetic field, increasing the power of Schumann Resonance to the highest point of 76. What is interesting to note is that this peak coincides with the global mass meditation that has took place on this date. During this period many groups of people (over 2 million), including Unify and Global Peace Meditation, held mass meditation. The reasons for various groups included earthly ascension, world peace and making positive changes caused by the Coronavirus.

The “Russian Space Observing Station” referred to by Segnidalciedo.it  is in Tomsk, a center for educational and scientific studies in Russia which monitors, among other things, Schumann resonances and posts the graphs for the general public. According to reddit.com/r/schumannresonance/, which monitors them, a large spike was seen at the same time as the mass meditation event.

Schumann resonance is a real thing. It’s used primarily for monitoring global lightning but has also been used for short-term earthquake prediction, monitoring climate change and locating offshore hydrocarbon deposits. The electromagnetic field is a real thing and proven to affect humans. Can the reverse also occur using the electromagnetic powers of the mind? Meditation is a real thing which is proven to induce changes in the human body. Can one person’s meditation affect that of another? If so, can they join together to affect more? If they can affect another mind or millions of minds, can they affect the Earth’s electromagnetic field? 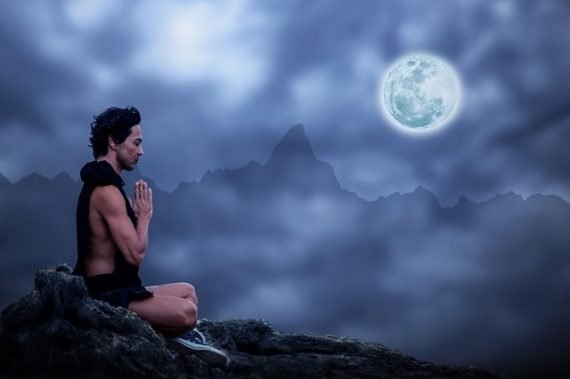 There are some missing links in chaining the mass meditation event of April 4th to the Schumann resonances of the same date and time. People participating in the event reported feeling better after meditating – no surprise there, so it should be easy to get them to do it again and measure it more precisely. However, asking them to do it in the interest of science isn’t the same as for the benefit of mankind. And how do you go about setting up a control group? Would 100,000 people in a football stadium work? When will see that again … if ever?

Which brings us back to the purpose of the mass meditation – the coronavirus. While a real scientific test of the correlation between mass mediation and the Schumann resonances would be great, what’s important right now is that small groups were able to motivate millions of people in lock-down to do something together. Now THAT’S a power worth studying.

Bigfoot: What Does the Government Know?