My final article (of four) on the interest that government agencies have taken in mysterious creatures is slightly different to the other three. Each of those articles were on different topics: (1) the Loch Ness Monster, (2) Bigfoot, and (3) the Yeti. Today's feature, however, covers a trio of controversial creatures: The Dogman, the Chupacabra, and the Thylacine. While the latter cannot be considered a monster, it has certainly become a part of Cryptozoology. I'll begin with the Dogman. Since 1991, the Wisconsin town of Elkhorn has been the lair and hunting ground of a terrifying creature that is the closest thing one can imagine to a real-life werewolf. And, just maybe, that’s exactly what it is. The monster has become known as the Beast of the Bray Road – on account of the fact that many of the initial sightings were made on that particular road. Without doubt, the expert on all-things of a lycanthropic nature in Wisconsin is author and journalist Linda Godfrey, who has penned half a dozen books on werewolves, and who I interviewed about her research into this malignant beast. She told me:

"The story first came to my attention in about 1991 from a woman who had heard rumors going around here in Elkhorn, and particularly in the high school, that people had been seeing something like a werewolf, a wolf-like creature, or a wolf-man. They didn’t really know what it was. But some were saying it was a werewolf. And the werewolf tag has just gotten used because I think that people really didn’t know what else to call it." And, that's how it all began. But, what about that official interest? Back to Linda: "I talked to the editor of The Week newspaper here, and which I used to work for. He said, ‘Why don’t you check around a little bit and see what you hear?’ This was about the end of December. And being a weekly newspaper that I worked for, we weren’t really hard news; we were much more feature oriented. So, I asked a friend who had a daughter in high school and she said, 'Oh yeah, that’s what everybody’s talking about.' So, I started my investigations and got one name from the woman who told me about it. She was also a part-time bus driver.

"In my first phone call to the bus driver, she told me that she had called the County Animal Control Officer. So, of course, when you’re a reporter, anytime you have a chance to find anything official that’s where you go. I went to see him and, sure enough, he had a folder in his file draw that he had actually marked Werewolf, in a tongue-in-cheek way. People had been phoning in to him to say that they had seen something. They didn’t know what it was. But from their descriptions, that’s what he had put. So, of course, that made it a news story. When you have a public official, the County Animal Control Officer, who has a folder marked Werewolf, that’s news. It was very unusual."

Now, let's take a look at the Chupacabra - albeit in a highly alternative fashion that you may not have considered. In 2005, I traveled to Puerto Rico (for the second time) with Redstar Films, to make a documentary on the Chupacabra. Our Puerto Rican guide, Orlando, was a veritable mine of information. I wasn’t sure if Orlando was a full-on believer in the creature, a middle of the road skeptic. It turned out, very refreshingly, that he was neither. Instead, he had a totally open, and unbiased, approach to the controversy. Very interestingly, he took the view that the phenomenon of the chupacabra was actually a combination of multiple phenomena. All of which had become fused into one, unholy thing: the goat-sucker. And, downright confusingly fused, too, I should stress. Orlando explained, specifically for the camera, that trying to suggest, or to theorize, that the chupacabra was this, or was that, was completely pointless. The trick to solving the riddle was to take each case on its own merit. Some cases of animal mutilation, he said, were absolutely nothing to do with the chupacabra, but were the work of occultists who had an agenda that involved the exploitation of the vampire stories. 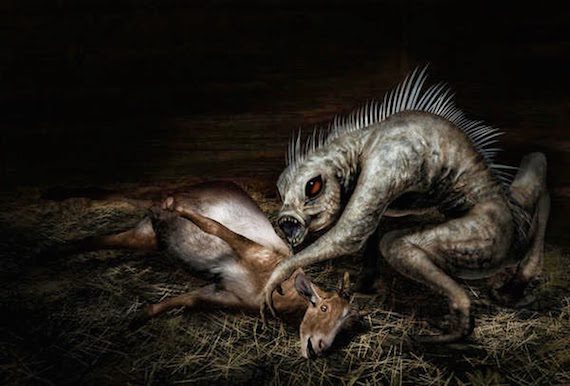 Orlando told us of an investigation that was run by the FBI’s field-office on Puerto Rico. It was in the 1990s when Bureau agents got caught up in an investigation that revolved around nothing less than the world of voodoo. In various parts of the island, the bodies of numerous animals were turning up dead, all bearing the classic marks of vampirism: savage attacks to the neck and a profound lack of blood. But there was something very odd about the killings. The necks of the animals had been shaved clean: where the blood had been removed, not a single hair was in sight. What were the chances that the monster had an aversion to hair and had carefully removed each and every follicle by means unknown? Zero, that’s what the chances were! It turned out that the culprits were occultists who followed a particularly dark offshoot of voodoo and who used animal blood in their rites. The marks to the necks were not bites. Shaving the hair on the relevant part of the neck simply made matters easier for the guilty parties to get the job done. To cover their tracks, however, and in the specific regions where the killings occurred, the group deliberately spread tales of the chupacabra and its penchant for blood. To be sure, it was a fascinating scenario.

Now, and finally, let's see what people in government have said about the Thylacine. Their correct title was Thylacinus cynocephalis, which translates as pouched dog with a wolf's head. They were dog-sized, striped marsupials, with jaws that had the ability to open to almost 180 degrees. Thylacines are believed to have become extinct back in the 1930s, and they were native to New Guinea, Australia and Tasmania. There are, however, numerous accounts that suggest these incredible animals are still with us - hiding in stealth. While the thylacine is generally accepted to have died out in Australia thousands of years ago, history has shown it clung on in Tasmania – roughly 150 miles from Australia - until quite recently. Not everyone, however, is so sure the creature is completely gone. How do we know? All thanks to the Tasmania Parks and Wildlife Service, and the Australian Government’s Freedom of Information Act, that’s how.

Both the TPWS and the Australian government have declassified their files and records on the creature; they are filled with credible sightings of thylacines in Tasmania, and all of which post-date the 1930s; in some cases significantly so. In the TPWS’ own website-based words: "Since 1936, no conclusive evidence of a thylacine has been found. However, the incidence of reported thylacine sightings has continued. Most sightings occur at night, in the north of the State, in or near areas where suitable habitat is still available. Although the species is now considered to be ‘probably extinct,’ these sightings provide some hope that the thylacine may still exist."

As for the Australian Government, it notes at its official webpage on the thylacine: "Australia is home to some of the world's most unusual and mysterious wildlife. Our native animals, such as the platypus, the koala and the kangaroo, have been a source of wonder and surprise to people the world over. But perhaps our most mysterious animal is the thylacine, or Tasmanian Tiger. There are many reasons why people are fascinated by this animal. Perhaps it is its name and the romantic notion of Australia having its own 'tiger.' Perhaps it is its sad history since European settlement, or the fact that there are many people who claim they have seen a Tasmanian Tiger and believe it may not be extinct after all."

What all of this demonstrates - across four articles - is that government agencies from various countries have taken significant interest in strange creatures - and for various reasons. No doubt, that interest will continue!