Multiple news sources in at least five cities in India are covering reports of a mysterious creature appearing at night on rooftops and in yards, knocking on doors and windows and then fleeing -- hopping fences and running far faster than anyone chasing him. It’s been happening for almost a week and no one can explain it. Could it be the return of the infamous Monkey Man of New Delhi?

“Reports have been surfacing that a mysterious creature is causing a lot of panic among the locals living in Karikkad, North Karikkad, Villannur, Aruvayi and Kongannur regions. Many people have seen the mysterious creature moving around in the region and some think it can be a man. The creature has a time frame of its own, it appears on rooftops and in the front yards of houses after 9 pm.”

Most of the reports are similar to this one from NewsD in New Delhi. The mysterious creature has reportedly been seen in the Karikkad, North Karikkad, Villannur, Aruvayi and Kongannur areas, all in the Thrissur district of the state of Kerala on the far southwestern coast of India. Many of the reports have “panic” somewhere in the text, but there’s little supporting evidence. Nor are there any better descriptions than a “dark creature.” While some suspect it’s a man or a “mentally ill man,” reports of it jumping on rooftops, outrunning people and “sliding down the trunk of a mango tree” have many suspecting its more animal in nature. Unfortunately, the reports and fears appear to be luring people out of houses where they’re supposed to be riding out the coronavirus epidemic. Is there a connection? 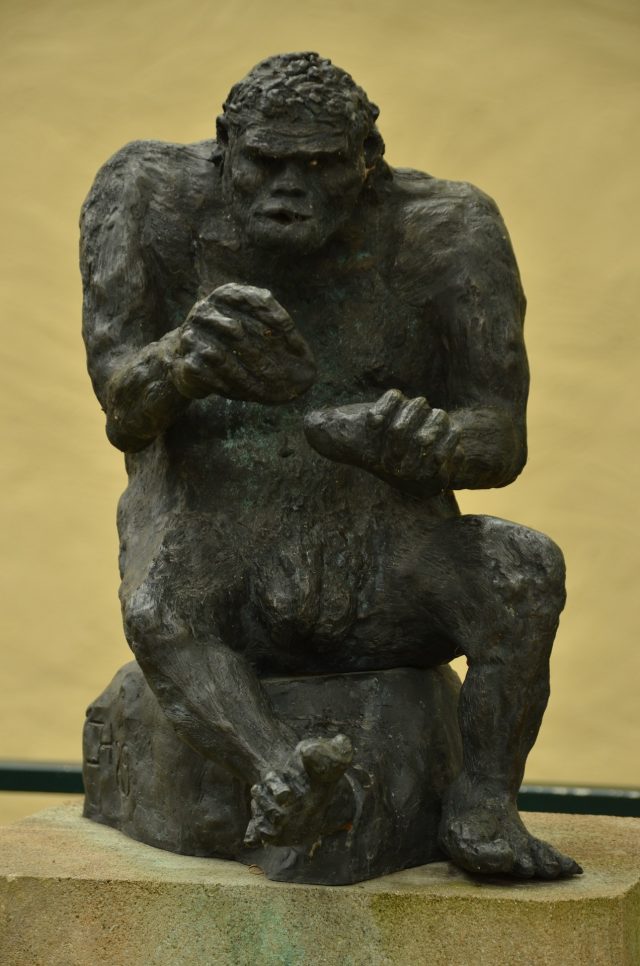 If not a trouble-making human (no robberies, vandalism or other crimes have been reported), what could this creature be? While Indian folklore is filled with strange creatures and deities, few modern cryptids fit this description. The Yeti is more of a Northern Indian Himalayan beast, so the next best candidate is the infamous Monkey Man of New Delhi.

The Monkey Man of New Delhi first appeared in May 2001 when that city’s residents began reporting seeing and sometimes being attacked by a strange monkey-like creature standing about four feet (1.2 meters) tall, covered in thick black hair, with glowing red eyes and … get ready … wearing a metal helmet three buttons on its chest. It was reportedly seen leaping from building to building

"We have consulted doctors about the bites and they said they were by some animal. The information we have is pointing towards an animal. But we checked with the local zoo and they said no animal had escaped from there."

According to CNN, the exasperated police responded to so many calls that they ran out of police cars. While no one took a photo, a police artist attempted to draw the creature, but the helmet and buttons made it look cartoonish. Unfortunately, some people reportedly died from falls after panicking and running from what they thought was the creature. Even worse, pranksters began roaming the streets in masks and scaring people. There was even a report of one poor four-foot-tall “wandering mystic” being beaten. All of this, plus the lack of any physical evidence and the drop in reports after a few days, led experts to categorize this as a case of mass hysteria among “ignorant” people living in hot, poor conditions. Despite that, reports say the police put manned posts on rooftops, instituted border checks and were ordered to shoot the Monkey Man on sight.

Has the New Delhi Monkey Man moved south? Is it a new type of creature or the resurrection of some long-lost one? Is this another case of Indian mass hysteria? Or is it just another case of one of the millions of wild monkeys roaming the country wreaking havoc under the protection of religion and government?

The needle points to monkey-induced, coronavirus-aided mass hysteria, but in India … it could be anything.

The Vocalizations of Monsters and Mysterious Entities