If 2020 has taught us anything, it's that end-of-the-world scenarios are only fun in imagination land. And there are many such possible scenarios. Some are inevitable, like asteroid impacts.  Luckily it seems that NASA is taking the basically-guaranteed threat of a meteor impact seriously and doing what they can to stop it. NASA and the European Space Agency have just released plans to field-test a new device they hope could protect us from the next apocalyptic impact event. But how do you stop a meteor impact? Lasers? Nukes? Bruce Willis? Nope, you're thinking too big. Dumb it down a little.  All you have to do is give that space-pebble a little push.

It's simple in theory, but much harder to pull off in practice. That said, NASA believes that preemptively changing an asteroid's trajectory is a more reasonable endeavor than just throwing nukes at it, although it might be less fun. To that end, NASA engineers have developed a device called the NEXT-C Ion Engine that they hope will be capable of knocking inbound asteroids off-course. But it would be a bit of a bummer if a doomsday rock was heading towards us and NASA said "don't worry, everything's groovy, we've got this," only for it not to work. So next year, NASA and the ESA will launch a project called DART (Double Asteroid Redirection Test) in which they will launch the Next-C ion engine into space and try to move two real asteroids. I'm not sure if how serious they are about this is comforting or extremely worrying. Maybe a bit of both. 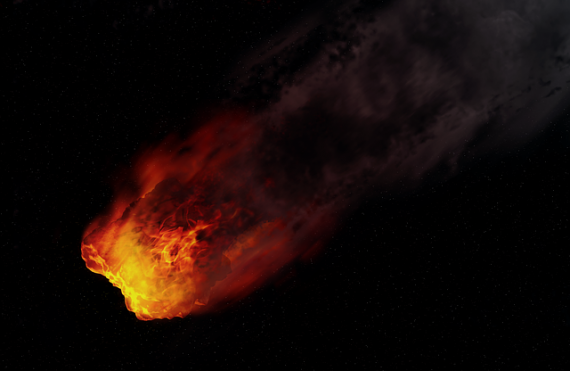 Didymos is a 2,650-foot-wide asteroid that travels with the much smaller and adorably named "Didymoon." If they were to hit Earth, it'd likely be game over. Luckily for us, they are not on a collision course with Earth, but the two asteroids do provide a great opportunity to test the NEXT-C ion engine. Currently, the Didymos system is 6.8 million miles from Earth. DART will send the NEXT-C ion engine to intercept the Didymous asteroids and smack into the larger of the two to change its trajectory. The mission will follow up with an ESA spacecraft called HERA in 2024 to determine if the asteroids have been successfully knocked off course.

To generate enough thrust to both reach Didymos in a timely manner and change the trajectory of a half-mile-wide asteroid, you need a special engine. The NEXT-C ion engine (NASA's Evolutionary Xenon Thruster—Commercial ion engine) is a revolutionary new thruster developed by NASA's Glenn Research Center and by Aerojet Rocketdyne. NEXT-C uses solar power to ignite the xenon gas propellant. CEO and President of Aerojet Rocketdyne Eileen Drake says:

When the NEXT-C engine impacts Didymos, it is expected to change the asteroid's orbital velocity by about a half millimeter per second. This should be enough of a change that telescopes on Earth will be able to notice.

Here's hoping that after we change Didymos' trajectory, those telescopes don't notice it quickly getting bigger.