Whale sharks are big, slow-moving, friendly sharks that tend to hang out in warm tropical waters, eating plankton and swimming alongside tourists. They're pretty cool sharks. Weighing over 20 tons and growing up to 18 meters in length, they also happen to be both the biggest sharks and the biggest fish in existence. Unfortunately, over-fishing in places like Thailand and the Philippines has led to a recent classification of whale sharks as an endangered species. As the world's population of whale sharks decreases, there is still much about these giant fish that remain a mystery. One such mystery is the lifespan of whale sharks. According to whale shark researchers, knowing the growth rate and lifespan of whale sharks is crucial to conservation efforts. While scientists know that, like many other species of sharks, whale sharks have a pretty impressive lifespan, an accurate way of determining the sharks' age hasn't been found.

Thankfully, we have nuclear weapons. And we've conducted enough nuclear tests since the 1940s to double the amount of the isotope carbon-14 in the atmosphere. Every living thing on the planet now carries a little extra carbon-14 around with them. You, me, the sharks, everyone. And because scientists know how fast carbon-14 isotopes decay, they can be used to accurately determine the age of an animal. One of the authors of a new study on whale shark aging, Dr. Mark Meekan from the Australian Institute of Marine Science in Perth says:

"So any animal that was alive then incorporated that spike in Carbon-14 into their hard parts. That means we've got a time marker within the vertebrae that means we can work out the periodicity at which those isotopes decay."

"The absolute longevity of these animals could be very, very old, possibly as much as 100-150 years old. This has huge implications for the species. It suggests that these things are probably intensely vulnerable to over-harvesting."

Meekan and his colleagues say that their work will go a long way to protecting whale sharks. Being able to accurately determine whale sharks' age can give conservation efforts a better picture of how well a population is doing and whether any fishing can be allowed. 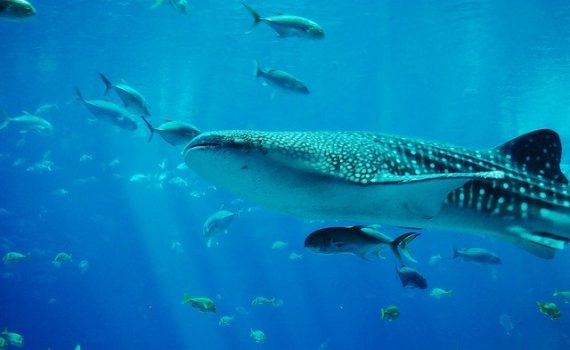 Whale shark tourism has proved to be a lucrative attraction in many tropical countries recently and Meekan says that encouraging cooperation between the various countries that sit along whale sharks' migratory routes will be key to their survival. After all, who doesn't want to swim with a big dopey 20-ton shark? Meekan says:

"Whale sharks are a fantastic ambassador for marine life and one that has lifted so many people out of poverty.

This is a good news story - and it shows there is a silver lining to the mushroom cloud after all."

The Strange Mystery of the Miniature Coffins of Scotland