Paleontologists discovered bones from a 40-million-year-old frog that provides further insight into Antarctica’s climate during ancient times. It was in Seymour Island close to the tip of the Antarctic Peninsula where the scientists uncovered fragments of the frog’s skull and hip bone during three Argentinean-Swedish expeditions that took place between 2011 and 2013.

“My field project aimed to find mammal fossils, to get more information about the mammalian fauna that lived in Antarctica before the freeze,” explained Thomas Mörs who is a paleontologist at the Swedish Museum of Natural History in Stockholm as well as the co-author of the study which can be read in full here. He went on to say, “During these three expeditions, I did a lot of survey work on Seymour, but we also spent considerable time taking sediment samples from two localities that had earlier produced fossil mammalian teeth, among them tiny teeth of small marsupials.”

When they were looking through the sediment samples at their laboratory, they noticed the tiny fragments of frog bones. And it was quite an exciting discovery as there had been “no record of amphibians, extinct or living groups, known from the 200 million years since.”

It’s already been discovered that giant amphibians had lived on Antarctica more than 200 million years ago during the Triassic Period. This new discovery, however, is the first evidence that amphibians closely related to those wandering the Earth today were also living on the continent millions of years ago. In fact, the newly found bone fragments were tested and identified to belonging to the Calyptocephalellidae family (also known as helmeted frogs) which includes five species that are currently living in South America.

According to the study, since the modern frogs live in the humid, warm climate of central Chilean Andes, that would indicate that Antarctica must have had similar weather 40 million years ago in order to accompany their ancient amphibian ancestors.

Antarctica was once part of the super-continent Gondwana that also included South America, Africa, Australia, the Indian subcontinent, and the Arabian Peninsula. Prior to completely splitting from the other continents, it is believed that sheets of ice had already begun covering parts of Antarctica. 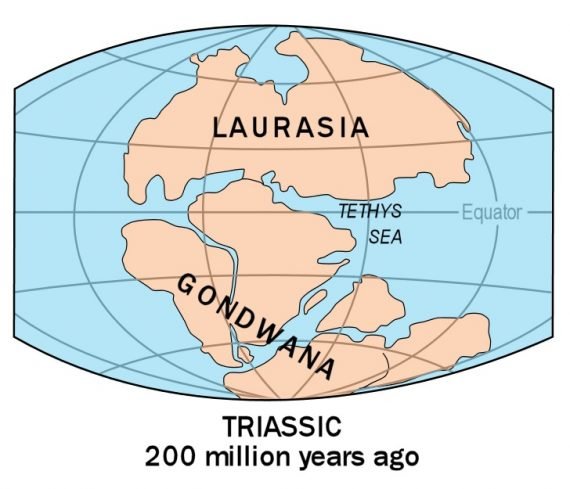 “The question is now, how cold was it, and what was living on the continent when these ice sheets started to form?” asked Mörs. “This frog is one more indication that in [that] time, at least around the Peninsula, it was still a suitable habitat for cold-blooded animals like reptiles and amphibians,” he said. The team plans to return to the area to conduct more research and hopefully find additional fossils. Pictures of the bone fragments can be seen here.