Some Bizarre Alien Encounters in Japan

Strange encounters with UFOs and their often enigmatic occupants have happened all over the world, from every corner of the globe. While those that happen in the United States and the U.K. seem to be the most well-known of oft-covered, this is certainly not the extent of this phenomenon. Perhaps it is the language barrier, but there are many cases that seem to have fallen through the cracks in other countries, and some remarkable ones that don't seem to get much coverage are a series of very bizarre encounters with what seem to be alien entities in the far eastern country of Japan.

One very weird alien encounter that also happens to have so-called photographic proof supposedly occurred in April of 1975, in the city of Kawanoe, on Japan’s Shikoku Island. On the night of March 24th, 1975, a local resident by the name of Giichi Shiota was at a city landfill when he says he saw something very bizarre indeed. There amongst the rubble he spied a luminous figure in some sort of metallic suit hovering around 7 feet off of the ground, which he would describe as an “alien cosmonaut.” The being itself was said to be about 6 feet tall, and it then smoothly descended to about a foot off of the ground before floating towards the startled witness, who says he then began to develop a sharp headache that increased with intensity the closer it came. This headache apparently became absolutely agonizing, sending him on his way.

Shiota then became determined to go back to the scene of his strange encounter, this time taking with him three cameras for the purpose of possibly capturing something strange on film. He would visit that landfill night after night for a whole week hoping to catch another glimpse of the otherworldly, and then on March 31 his patience apparently paid off. He would claim that that familiar head splitting headache had descended upon him once again, at which point he knew that he was no longer alone their huddling in the darkness. Looking about him, he could then make out what appeared to be a bluish, cloud-like light hovering around 300 feet away, which he described as an “electrical disturbance,” and as he peered through the gloom at it the humanoid emerged from its center. One again it glided towards him, and this time Shiota claimed that he had taken a series of photographs of the strange entity. As if realizing that it was being photographed, the creature then veered off at great speed and vanished into thin air.

What did he catch on film? The photos are inconclusive to say the least. Is this a hoax or is there anything more to it? Interestingly, on February 23, 1975, of that same year two 7-year-old boys named Masato Kawano and Katsuhiro Yamahata, were out roller skating in the early evening hours in Kofu City, Yamanashi Prefecture, when they claim that they saw in the sky a pair of luminous orange lights that flickered and made a strange “ticking sound.” As they looked on in amazement, one of the lights apparently moved off towards the distant mountains, while the other started to descend towards the ground nearby. The boys claimed that they went off to investigate, and saw the strange craft come down to rest in a small vineyard behind an old, abandoned estate. The craft was described as being a domed disc around 15 feet in diameter and 7 feet high, which rested upon three ball-shaped legs. The surface of the strange object was silver-colored, and appeared to have characters or letters of some sort etched upon it. The loud ticking sound of the craft was very pronounced as they drew closer, sounding somewhat reminiscent of a Geiger counter. As the two boys pondered what they were seeing, a hatch purportedly opened on the side out of nowhere and a ladder extended towards the ground, after which a strange looking being climbed out.

The creature stood around 4 feet tall, and was wearing a reflective silver suit of some sort. The being’s skin was allegedly a dark brown in color, and it was covered with thick wrinkles that were so pronounced as to make most of its facial features indiscernible, save for two pointed ears and prominent and intimidating 2-inch long silver fangs that jutted out from the folds of where its mouth might be. In its hands it held some sort of device whose purpose could not be fathomed, but which looked somewhat like “a rifle.” Another of the creatures could be seen sitting within the craft huddled over some sort of flickering control panel. Whatever it was seemed to have completely ignored the two young boys standing there gawking at it as it proceeded to carefully examine the surrounding terrain. After a few moments of this it suddenly seemed to become aware of the boys, after which it approached them and patted one of them, Yamahata, twice on the shoulder while issuing a sound that sounded like “a tape recorder running backwards.”

Upon being tapped, Yamahata allegedly slumped to the ground and was unable to move, paralyzed by some inscrutable force. This pushed Kawano into action, and he quickly scooped his friend up onto his shoulders and ran from the area as fast as his legs could carry him. When he got home, Yamahata came to, and they supposedly told their parents what had happened, who would grudgingly follow the boys out to the estate outside to see the strange orange light climbing up into the sky for themselves. The light would then emit a burst of blinding light and vanish. Later, school officials would descend upon the area in daylight to examine the site, and would allegedly find two sturdy concrete posts that had been pushed over by some powerful force, as well as a ring pattern etched into the ground nearby. Authorities of the Civil Aviation Bureau of Transportation Ministry would later get wind of the story and dismiss the lights as merely from normal aircraft in the area. No word on what they thought the fanged humanoid could have been, or if it had anything to do with what Shiota would witness a month later. 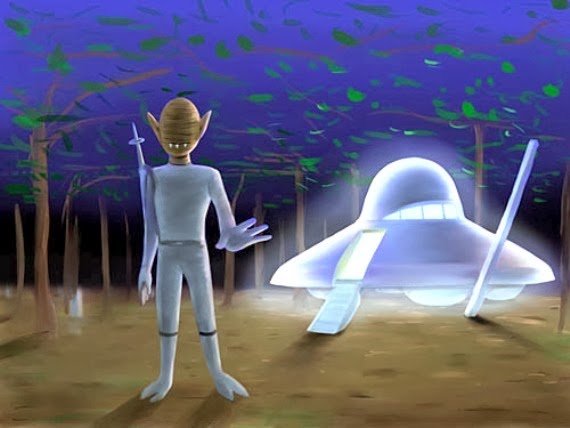 A few years later, in 1978 we have another very outlandish encounter, this time in the area of Sayama City. In October of that year, the city had been going through a spate of intense UFO activity, and on the evening of October 3 things would take a turn for the truly bizarre. On this night, 29-year-old Hideichi Amano was out testing out some HAM radio equipment on a hill overlooking the city. It was a hobby of his, and on this occasion he was using the radio to talk with other HAM enthusiasts throughout the area. He didn’t stay long, as his young daughter was waiting for him in the car, but as he got ready to leave something remarkable would purportedly happen.

As he prepared to start the vehicle, the entire interior was bathed in a bright light, its source a complete mystery as they had been out there completely alone. Amano looked outside but could see nothing that could account for the light, and when he looked back to his 2-year-old daughter she was in some sort of daze and foaming at the mouth. As he panicked and wondered what to do, an orange beam of light pierced in from out of the night to land upon his stomach, and he felt himself feeling woozy and faint. There was then the sensation of something pressing into the side of his head, and when he turned to look there was allegedly a humanoid entity with a round head, no neck, and glowing blue eyes standing there outside the car with a “pipe-like” instrument pushed up to his head, which was producing “voiceless high-pitched noises” that seemed to penetrate directly into his mind.

The panicked witness desperately tried to start his car, but nothing worked, and he seemed to be without any power at all. Indeed, moving his limbs felt like moving through a thick liquid, giving him the sense that he was partially paralyzed. He started to get the impression that that rapidly fluctuating droning in his head was giving him a message, although he had no idea what it could be. This apparently went on for about 5 minutes, after which that bizarre entity pulled away his instrument and vanished into the night. There was a beat of utter silence, and then the car roared to life, scaring Amano nearly as badly as that creature had. To his great relief, his young daughter now seemed to be OK, acting as if nothing had happened at all. 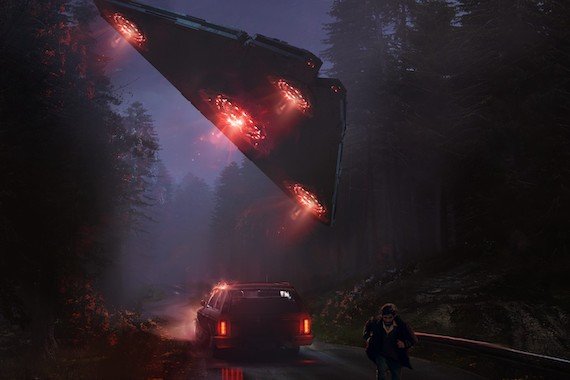 Amano would frantically contact police to tell them of what had happened, but they didn’t take it seriously at all. Through all of this his head was becoming increasingly painful, overcome with a relentless headache. After several nights of terrible nightmares, he would seek out hypnotic regression, which would turn up some curiosities. Amano related how the creature had given him a future date, time, and location to meet again, and how the entity had given him a bracelet of some sort, claimed to be some sort of communications device. Even more eerily still was his insistence that something had been placed within his head and was influencing his mind, and the whole story was so sensational that it made the rounds on Japanese television for a while before fading into obscurity. What was going on here? Who knows?

These cases for the most part seem to be pretty obscure and forgotten, relegated to the back catalog of alien encounters, despite their spectacular natures. There seems to have been very little follow-up done on them and little further information on them, leaving us to wonder what could be going on here. Were these aliens, interdimensional interlopers of some sort, the ravings of the imagination, or something more? Whatever the case may be, they remain some of the strangest that Japan has to offer.