Strange Monsters of the Red-Eyed Type

There can be few people reading this who have not at least heard of the legendary Mothman of Point Pleasant, West Virginia. It terrorized the people of the city and of the surrounding areas between November 1966 and December 1967. Its diabolical exploits were chronicled in the 2002 Hollywood movie starring Richard Gere: The Mothman Prophecies, so named after the book of the same title written by Mothman authority John Keel. If there is one thing that most people know of the Mothman, it's the eyes. It should be noted, though,  that there are multiple monsters that have stand-out eyes. Sometimes they're shining. On other occasions they are blazing. And there are those eyes that glow. With that in mind, I'll share with you today a handful of significant red-eyed creatures that have caught the attention of monster-hunters for decades. Here we go...

For years, controversial tales have surfaced from Puerto Rico – or to give it its correct title, the Commonwealth of Puerto Rico, an unincorporated territory of the United States - describing a killer-beast creeping around the landscape, while simultaneously plunging the population into states of deep fear and apprehension. The reason why is as simple as it is distinctly monstrous: the face of the creature is dominated by a pair of glowing red eyes, it has razor-style, claw-like appendages, vicious-looking teeth that could likely inflict some truly serious damage, sharp spikes running down its neck and spine, and even, on occasion, large membranous wings. On top of that, it thrives on blood. Puerto Rico, then, is home to a real-life vampire. Its moniker is the Chupacabra, meaning Goat-Sucker – which is a reference to the fact that when the tales first surfaced, most of the animals slain by the blood-sucking nightmare were goats. That’s right: if you’re a goat, it most certainly does not pay to make Puerto Rico your home. It might not be too safe if you’re human either. 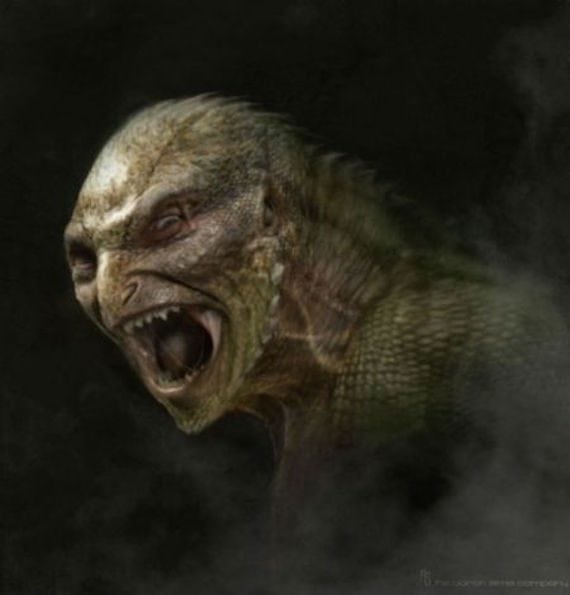 In the summer of 1988, a terrifying creature began haunting the woods and little towns of Lee County, South Carolina – and specifically the Scape Ore Swamp area. It quickly became known as Lizard Man, as a result of its alleged green and scaly body. For all intents and purposes, it was a case of The Creature from the Black Lagoon come to life. A bipedal lizard roaming the neighborhood? Maybe, yes. On the other hand, research undertaken years later suggested that the Lizard Man was something far more akin to Bigfoot. We’ll return to the matter of Bigfoot shortly, but, first, some much needed information and background on the creature.

It all began – publicly if not chronologically – when on July 14, 1988 the Waye family phoned the Lee County Sheriff’s office and made a very strange and disturbing claim. Something wild had attacked their 1985 Ford. It looked as if something large, powerful, and deeply savage had viciously clawed, and maybe even bitten into, the body of the vehicle – and particularly so the hood. Somewhat baffled, the deputies responded to the call, nevertheless. Sure enough, the Wayes were right on target: their vehicle was battered and bruised in the extreme. In addition, there were footprints across the muddy area. It was clearly time to bring in Sheriff Liston Truesdale. There was a strong probability that the prints were those of a fox.

Larger prints, also found, were suspected of being those of a bear – although some observers suggested they had human qualities. In such a close knit neighborhood it didn’t take long before news got around and numerous locals turned up to see what all the fuss was about. It’s notable that Sheriff Truesdale told Bigfoot investigator Lyle Blackburn, who wrote the definitive book on the affair – titled, of course, Lizard Man - that: “While we were there looking over this situation, we learned that people in the Browntown community had been seeing a strange creature about seven feet tall with red eyes.

Elliott O’ Donnell was an acclaimed authority ghosts and life after death, and who penned dozens of books on supernatural phenomena. Born in 1872, he continued writing until his death in 1965, at the age of ninety-three. O’Donnell also had a deep interest in reports of strange creatures, as the following 19th century account from O'Donnell demonstrates: "Henry Spicer, in his Strange Things Amongst Us, tells the story of a Captain Morgan, an honorable and vivacious gentleman, who, arriving in London in 1841, puts up for the night in a large, old-fashioned hotel. The room in which he slept was full of heavy, antique furniture, reminiscent of the days of King George I, one of the worst periods in modern English history for crime. Despite, however, his grimly suggestive surroundings, Captain Morgan quickly got into bed and was soon asleep. He was abruptly awakened by the sound of flapping, and, on looking up, he saw a huge black bird with outstretched wings and fiery red eyes perched on the rail at the foot of the four-poster bed. The creature flew at him and endeavored to peck his eyes. Captain Morgan resisted, and after a desperate struggle succeeded in driving it to a sofa in the corner of the room, where it settled down and regarded him with great fear in its eyes. Determined to destroy it, he flung himself on the top of it, when, to his surprise and terror, it immediately crumbled into nothingness." 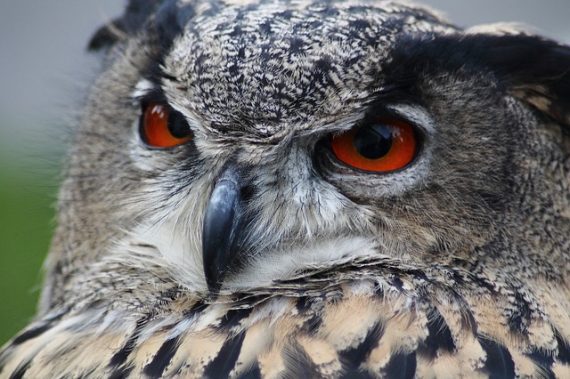 In 1976 the dense trees surrounding Mawnan Old Church, Cornwall, England became a veritable magnet for a beast that was christened the Owlman. The majority of those that crossed paths with the creature asserted that it was human-like in both size and design, and possessed a pair of large wings, fiery red eyes, claws, and exuded an atmosphere of menace. No wonder people make parallels with Mothman. It all began during the weekend of Easter 1976, when two young girls, June and Vicky Melling, had an encounter of a truly nightmarish kind in Mawnan Woods. The girls were on holiday with their parents when they saw a gigantic, feathery 'bird man' hovering over the 13th Century church.

Two fourteen year old girls, Sally Chapman and Barbara Perry, also had the misfortune to have a run-in with the Owlman in 1976. At around 10.00 p.m., while camping in the woods of Mawnan, and as they sat outside of their tent making a pot of tea, the pair heard a strange hissing noise. On looking around, they saw the infernal Owlman staring in their direction from a distance of about sixty feet. Sally said: "It was like a big owl with pointed ears, as big as a man. The eyes were red and glowing. At first I thought that it was someone dressed-up, playing a joke, trying to scare us. I laughed at it. We both did. Then it went up in the air and we both screamed. When it went up you could see its feet!"

I'm sure there could be numerous theories to explain those red eyes. Probably enough theories to write a whole book on the subject. No, I won't be writing it. But, someone definitely should!