Strange Noises in the Sky Heard in Argentina, Slovakia, the U.S. and Brazil

One of the consequences of what is fast becoming a worldwide shutdown of businesses and travel is that the noise level outdoors has been reduced drastically, to the point where many people are enjoying the quiet. The lack of clatter and shatter is also allowing people to hear more things that they may not have heard before and therefore may not have worried about before, like the mysterious sounds, horns and hums reported in many places around the world. That seems to be the case in Brazil, Slovakia, the U.S. and Argentina where concerned citizens are uploading recordings, sharing their experience, getting advice and often scaring the pants off of others. Are these sounds related? What are they?

“At 2:15 pm, I heard a crash similar to that of a jet crossing the sky or that of an airplane turbine. I heard it twice, and there was nothing in the sky, I didn't see any planes, despite being cloudy. I commented to a friend who lives in another location, and he said he heard it too."

The website Otempo in Brazil reports numerous accounts of people hearing a variety of unexplained sounds across the country, including the one above from Belo Horizonte in the state of Minas Gerais in southeastern Brazil. It noted that “Noise in the sky” was trending on Twitter but the Civil Defense website in Belo Horizonte had no mention of the sounds. Local astronomer Bernardo Riedel said there were no reports of meteorites in the area. 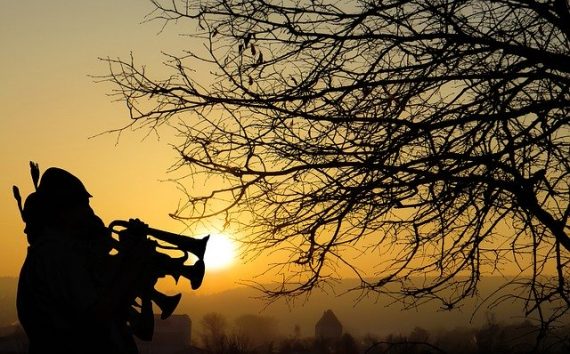 “On April 3, 2020, very scary news came from the city of Bratislava, the capital of Slovakia: Usually, there are always a lot of questions with these “trumpet sounds”, since the videos are isolated incidents, but in this case the whole city heard it all.”

At about the same time, the website SoulAsk reported on “trumpet” sounds in Bratislava. In this case, there are multiple YouTube videos of the sounds, which are more like “respirators” than trumpets, according to one witness. (Listen to one here.) With respirators in the news so much lately, that could just be the power of suggestion, but they do sound more like Darth Vader breathing than Miles Davis blowing. One scientific explanation was the shifting of tectonic plates rubbing against the lost microcontinent of Greater Adria underneath Europe, although there were no reports of earthquakes or other seismic disturbances.

"This is something unheard of, I never heard anything like this, it is beyond my capabilities."

Moving to Olavarría in the province of Buenos Aires, SoulAsk also reports of strange, unexplained sounds of various types, some of which disturbed local dogs. (Listen here.) “Researcher” Mauricio Gorili had no explanation, nor did astronomers or meteorologists. That left it open for sites like “Humanoids in Olavarría” to point to – what else – humanoids.

“We are witnessing "the great migration", they (the humanoids) have infiltrated us for decades but now they are approaching en masse, the sounds registered in the city of Olavarria correspond to the opening of a portal in which it allows that these beings can invade us in a more crowded way.”

Meanwhile, in the U.S., strange sounds were recorded in Belton, Missouri (listen here), and South Philadelphia, Pennsylvania (listen here), and probably heard in plenty of other places. Some blamed these on the latest villain-of-the-moment – 5G – but there’s no evidence that 5G towers are making any kind of noises at all.

Those are just some of the latest sounds. The website Strange Sounds has more. Is there some sort of logical or scientific explanation for this wide variety of strange sounds around the world -- airplanes, gunshots, plates scraping, construction, factories? Is it just because the noise level is down due to the coronavirus lockdowns, causing stir-crazy, locked-up humans who are going outside for a change to hear things they’ve never been able to before? There doesn’t seem to be a general cause and there are far too many to investigate each one individually, so they’re being ignored or dumped into when-we-get-around-to-it piles, never to be checked out. In the meantime, the general public wants answers or they’ll continue to turn to cover-ups, aliens, apocalyptic predictions and the like.

Will we ever find out? Go outside and listen for yourself. Maybe you will be the one to finally figure it out. If you do, will you tell anyone?