The Anthropologist Speaks: Grover Krantz and the Scientific Case for Sasquatch, Part One

Grover Krantz was more than just an icon in the field of anthropology: he was a maverick.

Since early in life, Krantz had been fascinated with humankind and its origins. In 1971 when he was awarded his doctorate in anthropology from the University of Minnesota, his dissertation was aptly titled The Origins of Man, setting the stage for a rich career in the study of paleoanthropology at Washington State University from 1969 until 1998.

In addition to serving as a professor of anthropology for two decades, he authored ten books and dozens of research papers on the subject of human evolution. From ancient fossils like Ramapithecus to the famous Kennewick Man, Krantz was so devoted to his study of humanity and its origins that, upon his death, he left his body to science. His bones are now in the possession of the Smithsonian Institute, where they are on display with those of his beloved dog, Clyde.

Krantz was also notorious among his colleagues, and it wasn't just for giving difficult exams to his students. Krantz was the leading scientist of his day to seriously look at the subject of Sasquatch.

"He enjoyed taking the road less traveled," notes author Brian Regal in his book Searching for Sasquatch, "which he did from conviction, but also from the simple joy of contrariness."

Few would argue that Krantz enjoyed being a contrarian. He was equally likely to lend his anthropological expertise toward participation in a public debate on atheism vs creationism as he was to debate skeptics who challenged his views on the reality of Sasquatch as an undiscovered species in the Pacific Northwest. However, for Krantz, it was about more than just playing devil's advocate: in his opinion, some of the evidence he had observed simply could not have been faked, a position that often invited criticism from other professionals.

Krantz hadn't always placed himself in the "believer" camp; like many of his critics, he had once been a skeptic himself. However, it was the appearance of unusual footprints around the ghost town of Bossburg, Washington in 1969 that led him to consider whether a crude hoax could account for all of the details that appeared in castings of the footprints, which he later examined at length.

"This is a cast of an individual that is very obviously crippled," Krantz said of the specimens during a notable appearance on the In Search Of... television program. "I studied this at some length and found these two bulges on the outside of the foot.

"Anatomically they have to correspond to a couple of gaps in the bones in the foot themselves."

According to Krantz, the same resulting bulges in a normal human foot would have been in a different location. "Here," Krantz said, "they're shifted forward."

So what did this mean?

"Well, anatomically this means that the ankle weight is shifted somewhat forward," Krantz explained. "It's not just a gigantic human foot, the leverage has been redesigned. And this happens to be redesigned just exactly the way it would have to be for an 800-pound animal."

To Krantz, there was no way the features of the Bossburg track could have been explained away as a hoax.

"The idea this was faked by somebody isn't quite so simple. If it was faked it was done by a human anatomist who was a real genius, and he had to have laid out thousands of these fakes all over the place, and that just simply becomes impossible." 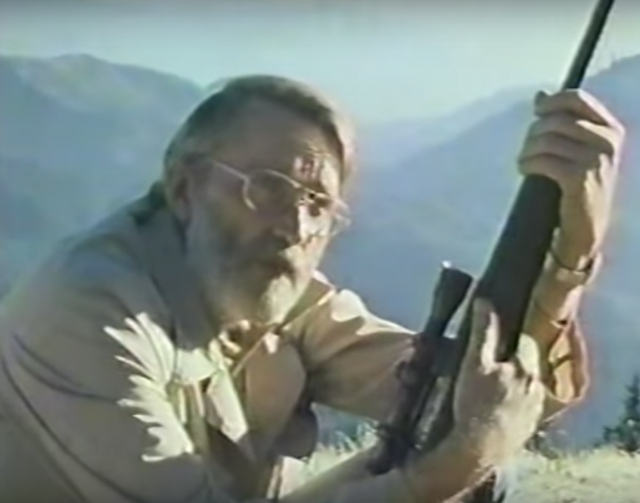 Years later, Krantz appeared on an episode of Discovery's The X Creatures, where he revisited the Bossburg affair.

"If we had an erect biped, eight feet tall, and it was going to walk in a human manner, how much farther forward would the ankle have to be placed? I did some simple arithmetic calculations on that, got an exact answer, and then went back and measured my reconstruction. It was exactly correct.

"That was enough for me to be absolutely sure that those feet were made by a living creature."

Much like before, Krantz again argued that the hoax explanation seemed unlikely in this instance.

"If the Bossburg tracks of the crippled individual were made by a hoaxer, there are several considerations. One is that he had to know human anatomy with great detail. He had to be able to devise distortions of the anatomy, and he had to calculate exactly how an enlarged individual would have to be constructed in order to walk properly."

"That requires an elaboration of thought and knowledge that I don't think anyone in the world has."

The anthropologist often stated in interviews over the years that anyone perpetrating such a hoax would require a greater knowledge of human anatomy than he did, which for Krantz was the only thing that really seemed "impossible" with regard to the Sasquatch situation.

It was Krantz's surefooted (no pun intended) attitude that drove his critics wild, both the Bigfoot skeptics, as well as believers. Even as widely regarded

"This guy is so condescending," said the late Rene Dahinden during a lecture he gave on Krantz several decades ago. "[He's] so totally ego-maniac, that I have to kick him. I can't help myself."

Dahinden minced no words when it came to his dislike for Krantz, who he felt--despite the anthropologist's scientific approach--had a clear agenda when it came to the study of Sasquatch. In fact, it had been Dahinden who was first to arrive on the scene at Bossburg in 1969, as the same story of footprints that made a believer out of Krantz had been unfolding.

The Bossburg tracks weren't the only instance where Krantz was convinced by evidence which, in his opinion, offered unique details about Sasquatch, and helped to build the case for the creature's existence. It was also not the only time he would be criticized by others, including professional academics that disputed his ideas. In the second part of this series, we'll look at what Krantz had to say about one of the most controversial pieces of Sasquatch evidence ever--the famous Patterson-Gimlin film made at Bluff Creek, California, in 1967--and what his critics thought about those observations.

Universe May Expand at Different Speeds in Different Places, According to New Study