The Loch Ness Monsters: Are They Mainly Nocturnal?

Sightings of strange creatures in Loch Ness, Scotland date back centuries ago. In times long gone, they were known as Kelpies and Water-Horses, supernatural shape-shifting creatures that would drag people into the depths of the loch, drowning them in the process. Today, the monsters of the loch go by the well-known name of Nessie. Over the years, numerous photos of what are alleged to show strange animals in Loch Ness have been presented as evidence of monsters. Some may very well be the real deal. Other images clearly show waves and rotting tree trunks. Nessie expert Roland Watson has written an entire book on land-based sightings of the Nessies. Yet, even with the photos, the witness testimony, and the creatures taking an occasional lurk around the landscape, we still don't have any hard evidence that the Nessies exist. 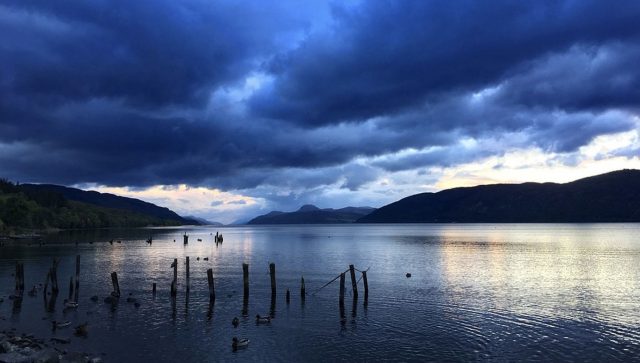 Maybe, the reason why the Nessies are so elusive - in terms of us finding hard evidence - is because they are largely nocturnal. Perhaps, for the most part, they don't surface until the loch is pitch black and it's practically impossible to see what's afoot in those deep waters. And that goes for the land sightings, too: there may have been more such cases than we can ever know. After all, the chances of seeing a Nessie haul itself out of the water and onto the land - at, let's say, 3:00 a.m. - are extremely unlikely, to be sure. With that all said, let's now take a look at at the theory that the Nessies are far more active in the dead of night than they are during the day.

In a recent article titled "The Story of Arthur Kopit's Land Sighting," Roland Watson addresses the sighting of the aforementioned Mr. Kopit. Roland directs us to the words of Kopit himself: "One night in August 1962, I was in the vicinity of Urquhart Castle, on the shore of Loch Ness. I had no idea at the time that this area was the site of the most frequent Loch Ness 'monster' sightings. It was perhaps 11, and there was a full moon shining toward us across the loch. When I parked my car outside the castle gate, at least 100 yards from the loch, I was able to hear a very loud sound. I did not have to strain to make the noise out; indeed, I, and the girl I was with, heard it as soon as we left our car. And as we approached the castle, it quickly became clear that the sound was emanating from a spot beyond the castle - that is to say, the water."

Kopit describes hearing "...a halting sort of sound; uneven breath; a kind of gasping. It made me think of an asthmatic walrus." Certainly, this is far more exciting than most water-based encounters reported during the day, to say the least! Still on the theory of the nocturnal Nessie, it's now time for us to take a look at the theory that the Nessies might be Salamanders. They are amphibians that are noted for their long tails, blunt heads, and short limbs and which – in the case of the Chinese giant salamander – can reach lengths of six feet. But, is it possible that some salamanders could grow much larger, even to the extent of fifteen to twenty-five feet? Incredible? Yes. Implausible? Maybe not. Steve Plambeck is a noted authority on the giant salamander theory when it comes to the matter of the Loch Ness Monster.

Steve makes an important point: "Nessie is a bottom dwelling, water breathing animal that spends very little time on the surface or in mid-water, although just enough to be spotted visually or by sonar on very rare occasions.  Its forays up from the depths are most likely made along the sides of the Loch, to feed on the fish which are predominantly found along the sides, in shallower water above the underwater cliffs that precipitously drop off into the 750 foot abyss.  Such behavior is only consistent with a fish, or aquatic amphibian, which can extract all of its needed oxygen directly from the water. Yet as seldom as it happens, and for reasons known only to the animal itself, Nessie also leaves the water for apparently brief stretches, as observed most famously in the Spicer and Grant sightings of 1933 and 1934 respectively.  It may be said that this is nothing new:  it’s a centuries old tradition among the Highlanders that the kelpie or water horse of Loch Ness comes ashore.  That’s a key behavioral trait to take into account if we are distinguishing fish from amphibians." 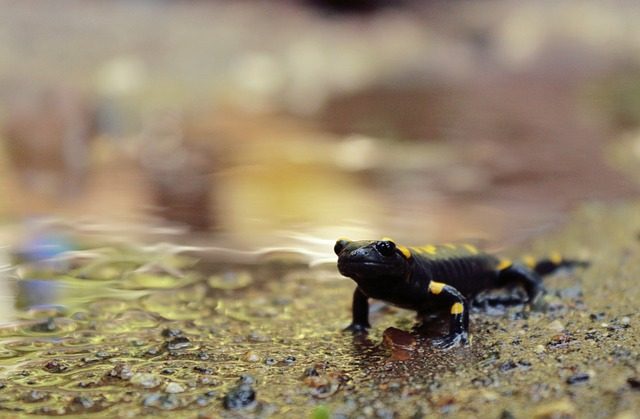 It just so happens that Salamanders are nocturnal. Stephanie Pappas, at Scientific American, notes "their quiet, often nocturnal lifestyles." Moving on, there's this from the University of Georgia: "Adult Marbled Salamanders are nocturnal and burrow or take refuge under logs or other cover during the day. They are perhaps most often encountered when they migrate to wetlands to breed on rainy nights in September and October." And, from Texas Parks & Wildlife we learn: "Barred tiger salamanders best avoid predators by a nocturnal and secretive lifestyle. They are active under the cover of darkness and spend most of their time in underground burrows or in thick vegetation near water. This salamander may take cover in mammal burrows or, if the soil is soft enough, they will dig out their own shelter."

But, what of the famous long neck that has been reported in many Nessie cases? Certainly, Salamanders don't have long necks. They do, however, have long tails. Steve Plambeck has suggested that what people assume are huge necks are actually long tails breaking the surface of the water. It is, no doubt, a fascinating theory. In light of all the above, and if you want to try and see a Nessie, it may well be wise to do your investigations in the very early hours of the morning. You may get a surprise, just like Arthur Kopit did!

The Bizarre Case of Ted Owens, the Contactee Given Super Powers by Aliens