The Mysterious and Sinister Hunger Stones of Europe

Throughout history people have always like to carve out things in stone. And why not? It is probably the most permanent way to store data there is. Despite all of our technological advances, if you really want people hundreds or even thousands of years from now to get your message, the best way to do it is still the old fashioned way, to etch it into rock. Some of these messages from the past are mundane, others mysterious or cryptic, and still others bring us dire omens. Here we will look at a collection of mysterious stones from the past, which hold ominous messages for the future.

In medieval times famine was a very real specter that hung over the land, made especially more sinister in that many at the time lived solely at sustenance level. There was no room for error, and a drought or bad crop could spell serious doom and gloom during the era, with such bouts of calamity becoming much feared, even legendary. In order to warn future generations of these what for them were cataclysmic events, the people of the era came up with a curious way to warn those in the future, which came in the form of the ominous omens of misfortune known as the “hunger stones,” or also the “drought stones.”

The hunger stones were simple in premise. Massive boulders or slabs of rock on river bottoms were engraved and etched with various spooky and portentous warnings of catastrophe, which would normally be hidden from view. Indeed, in the best of times one would not even know they were there, but if the water levels fell to a certain extent, like in a drought, the boulders would be exposed, as would be their terrifying messages. If one were to see the stones exposed, they knew they were in for trouble, as it was spelled out there in the rock in no uncertain terms for all to see. Many of the stones included artwork, and in some cases even chronological records of previous droughts that had hit the region, in some cases covering nearly 500 years of droughts and calamities on one stone. They were messages from the past to future generations and memorials of suffering, some merely flatly stating that doom was upon them, others more cryptic in nature, some even somewhat hopeful, but they were in every case nothing that anyone wanted to see.

Hunger stones date back to at least the 16th century, and can be found all over Central Europe, and have even been found as far away as Pennsylvania, in the United States, but most of them seem to be concentrated in the regions of Germany, Czech Republic, Slovakia, Austria, and Hungary, and exist in particularly great numbers along the River Elbe, in the Czech republic. Luckily one could go for many years without ever seeing a hunger stone, and many forgot they were even there at all. Indeed, it was not until the 19th century that people were even largely aware that they had existed at all, yet in recent years a great many of them have been emerging as global climate change takes its toll. 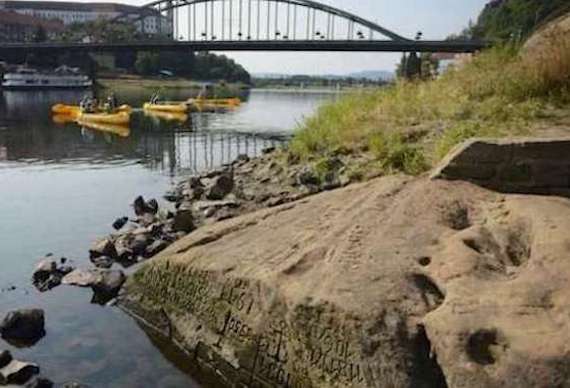 Among the most famous of these are the ones in the vicinity of the Elbe river, near the northern town of Děčín, near the German border in the Czech Republic, which began to be exposed in 2018 after a harsh summer, heat wave, drought, and the building of a dam. These forces conspired to force over a dozen hunger stones back up from the murk into the public consciousness, and they are creepy to say the least. One reads “If you see me, weep,” while another bears the sinister message “If you will again see this stone, so you will weep, so shallow the water was in the year 1417,” and yet another reads “We cried—we cry—and you will cry.” Still another has etched upon it “Don’t cry, girl, don’t fret. When it’s dry, just spray your field wet.” A lot of weeping and crying, in other words, and it is really quite startling to see these warnings from the past pop up after centuries buried beneath the river. There is something oddly unsettling about looking upon these messages in rock carved by long dead hands centuries ago, immortalized to freak people out forever more, and while we are in a position now to survive these heat waves, it is disturbing in its own way. Oddly, the arrival of the stones once again brought with it new dangers the ones who engraved these had never even imagined, such as unexploded mines and grenades from World War II lying at the bottom of the river.

As scary as these portents of doom from the past are, they have become sort of a tourist attraction in recent times, who are more interested in the historical significance of these stones than they are the dire warnings they hold. Yet, it seems to be saying something that these stones, once tucked away to be only seen in times of strife have been popping up with increasing frequency and regularity in recent years. There have never been so many of these things exposed all at once as there are today, so that seems like something that should be at least a little worrying. In this day and age it is hard not to think that perhaps these long ago people were carving out their dire portents they were onto something.

30,000 More People Looking for Loch Ness Monster During the Loch-Down