The Mysterious Hanging Coffins of China

Since the time that our primitive brains could really grasp what death was and value the idea that it was proper to pay respects to our departed there have been as many funerary practices that have popped up across the world as cultures that practice them. Some of these can be very strange, weird, even alien to those who are not familiar with them, and in some cases these practices have vanished into history along with those who observed them. Out in the remote wilds of China can be found one such case, in which these mysterious peoples hung coffins and the corpses of the dead from high cliffs, dangling in the wind and past our attempts to understand them.

Across a wide swath of remote mountains and valleys in central China, mostly in the Sichuan, Yunnan, and Guizhou provinces, a visitor might be startled to look up one of these forbidding, windswept cliff faces to see hanging there dangling from its precarious perch what looks to be a coffin. Looking more closely, one might realize that there are others there as well, solemnly lined up right up into the air of that craggy stone. Some of them hang from ropes, others are sequestered within crevices or in caves hewn directly within the rock face for this purpose, while others still are placed upon rock outcroppings or poles, but all are eerie in their remote solitude, and none are what one might be expecting to see in this remote place. These are the mysterious hanging coffins of China, and they have been baffling scientists for decades.

These bizarre coffins come in many sizes, shapes, types, and indeed ages. The oldest among them are up to 3,000 years old, and all seem to be carved out of a single piece of wood, which has been oiled and treated to protect it from the elements, and some of them hold decorations or bronze ornaments and covers. They hang from treacherous cliffs, sit perched upon outcroppings or wooden beams embedded into the rock, or lie piled within inaccessible caves, both natural and manmade. Many of these coffins still contain human remains, the remnants of clothing, ceramics, jewelry, pottery, musical instruments, knives, jade figurines and ornaments, and other belongings of the deceased, all of them laboriously lifted high up these cliff faces for reasons unknown and through unclear means, despite the fact that many of them would have weighed hundreds of pounds. In some coffins are just a single body, whereas others contain several, for reasons unknown. 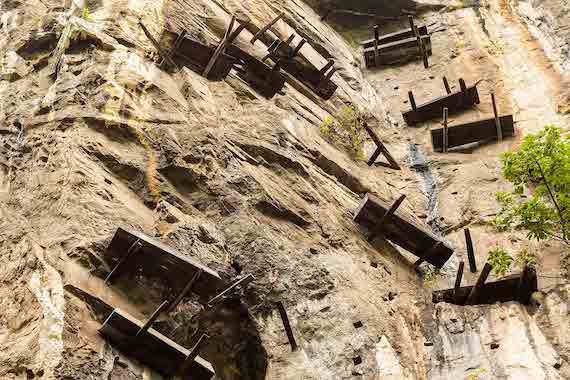 Most of the coffins have been attributed to the mysterious Bo people, who were in their heyday around 3,000 years ago in the Sichuan and Yunnan provinces, right up until they mysteriously disappeared around 400 years ago, possibly to escape persecution as a minority ethnicity after the Ming dynasty took over. Other ethnic groups were thought to have had such funerary practices as well, such as the Guyue people. Since they were in such remote areas and often not readily visible from the ground, these coffins remained hidden until the 1970s, after which they caused quite a lot of bafflement.

The purpose of these hanging coffins, of which there are over 300, remains unclear. It is obvious it would have been labor intensive to lift them up hundreds of feet into the air, as well as to craft the caves and drive the wooden beams into the solid rock. This would have been no small feat, and it is still not really understood how it would be done, with ideas ranging from that they lowered them down from above to that they used advanced levers and scaffolding to bring them up from below, or utilized earthen ramps or even actual magic, but there is no real evidence for any of these remaining. 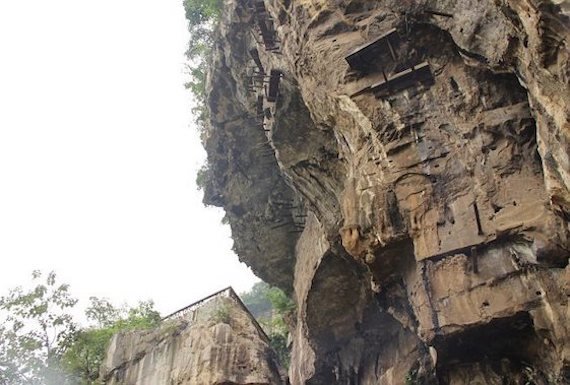 Even more mysterious is the reason for it all, although there have been various theories thrown around. The most obvious is that it was simply for practical reasons, as burials high off the ground would be less likely to be scavenged by wild animals while also freeing up land to be used for farming. Yet, it has been noticed that the higher up one goes, the more lavish the coffins and contents are, which has fueled speculation that it might have been a way to bring the dead closer to heaven, with the higher coffins reserved for society’s more prestigious. Other ideas are that it might have helped to better preserve corpses, or might have just been a way to flaunt one’s standing in society by showing how high they were able to raise their dead, a sort of status symbol. However, with no written records of the practice it is impossible to know for sure, the meaning lost to the mists of time. Interestingly, there are other such hanging graves to be found in the Philippines and Indonesia, although what connection they have, if any, is unclear.

In recent years these coffins have come into some rough times. Many of them have degraded and fallen to be dashed upon the rocks below. Others have been looted or defiled by visitors. One such coffin was found to be ransacked with a cigarette left within the skull’s mouth. In another case a fire destroyed many of them. These sites are not well protected, and in recent years there have been some efforts to preserve this mysterious slice of the past, but many of the coffins have been destroyed or otherwise rendered useless for study. Whether they can be preserved or not before it is too late is anyone's guess, but there doesn't seem to be a lot of priority placed on these potential glimpses into a fascinating past.

World’s Oldest String Was Made By Neanderthals