Among mysterious vanishings there are sometimes some that become inextricably linked to the places where they have occurred. Whether it is because of the grim circumstances of the disappearance itself or some dark history inherit to the locale, one can sometime not be separated from the other, the place and the incident married together in a ceremony of mysterious clues and puzzling leads. One of these was the promising student who went missing at a haunted dormitory in Florida, who has seemingly stepped off the face of the earth and remains tied to that place.

Old Fisher Hall, at Ohio's prestigious Miami University, already has a colorful and often spooky enough history as it is even without adding mysterious vanishings into the mix. The rather intimidating looking hall was originally built in 1856 as a part of the Oxford College for Women, but this soon fell through when the college proved to be a failure and went out of business in 1882. The abandoned 3-story stone and brick structure was then briefly a hotel, before being acquired by a Dr. Harvey Cook and repurposed into a sanitarium in the 1880s, called The Oxford Retreat. Its days as a sanitarium are riddled with rumors, such as that there were secret experiments carried out here or that Dr. Cook had a secret network of tunnels underground. Many patients invariably died here, and by the time the building was sold to the Miami University in 1925 and turned into the residence hall Fisher Hall it already had a reputation as being haunted, only fueled by students occasionally stumbling across lost spooky artifacts from its days as an insane asylum.

It was here at Fisher Hall where a sophomore at the Miami University by the name of Ronald Henry Tammen, Jr. lived in 1953. He was by all accounts a promising and popular student, involved in many activities such as the University jazz band, the Delta Tau Delta fraternity, the US Navy ROTC, and the school’s wrestling team, and on top of this he had good grades. There was nothing at all that marked him as anything other than a successful member of the student body, but one evening in April of that year things would take a dark turn, and Tammen would step off the face of the earth to become the most notorious unsolved mystery in the history of the university.

On Sunday, April 19, 1953, at approximately 8:00 PM, Tammen was in his dorm room quietly studying when he noticed that someone had put a dead fish in his bed, probably as a practical joke. He angrily went to go have his bedsheets replaced, and then went back to his studies, but this was the last time anyone would see him. It is known that he returned to his room and entered at 8:30PM, and although no one saw him leave again, when his roommate Charles Findlay came home at 10:00 PM Tammen was nowhere to be seen. The lights were all on, the radio was playing, and on his desk a textbook lay open, his watch, clothes, wallet, car keys, class ring, identification, and other personal items were all left behind, and the roommate just assumed he had gone off party with his fraternity. However, by the next day he still hadn’t returned and this was where things would get suspicious.

Authorities were notified and found that Tammen’s car, a gold 1938 Chevrolet sedan, was still in its parking lot, complete with his prized bass fiddle sitting in the back seat. Oddly, his coat was found to have been left behind the night before, even though it had been uncommonly cold for April with a flurry of snow coming down. His bank account was found to be untouched, and it was estimated that he had left the room with no more than 15 to 20 dollars on him. It was considered odd that although Tammen had dropped out of his psychology course a few weeks earlier, the textbook lying open on his desk was for that very class. Why would he have been studying that? Nothing was found to be missing except a single pillowcase from the young man’s pillow, although what connection that could have to anything was unknown.

It was all very perplexing, as everything in the room seemed to be in order as if Tammen would come back at any moment, and since there was no sign of a struggle and the fact that the young man was a large, intimidating man, it was not thought that he was forcefully abducted from his room. However, asking around the dorm showed that no one had seen him actually leave and there had been nothing out of the ordinary that evening, and so police were forced to speculate. Had he had some sort of onset of mental illness? Had he meant to go to the fraternity house and then gotten lost? If so, why didn’t he take his jacket? What was going on here? No one knew.

Police would soon turn up some more strange clues and details. One woman living in the next town over, about twelve miles east of the Miami University campus, called to say that a man she said fit Tammen’s description had appeared at her house in the middle of the night to ask for directions to the nearest bus stop. She claimed that the man had seemed to be in some sort of trance, his face smeared with dirt and wearing no coat despite the frigid weather. She said that she had given him instructions, but that the bus had closed for the night, meaning he could not have possibly gotten on one. Police began to suspect that this might have been part of a hazing ritual for Tammen’s fraternity that had gone horribly wrong, that he had been whisked away from his room suddenly, perhaps his head covered with that pillowcase, and then sent on some unknown errand, but Delta Tau Delta denied this. Another bizarre clue uncovered years later was that just a few months before Tammen’s disappearance he had apparently requested to have a blood test to determine his blood type all the way over in Hamilton County, even though he could have had that done on campus. It was unclear what connection this had to anything, but it was seen as certainly odd.

Police had ruled out foul play and fraternity hazing, which left few other options. Had he decided to run off? He was a popular student, who according to his parents had no problems with depression and had expressed no particular unhappiness, so why would he do this? Theories over the years have flown. One idea is that he was recruited by the CIA for the Korean War, or that conversely, he had run from the draft, but there is no evidence of this. Another theory is that he had perhaps gotten a girl pregnant and wanted to avoid shaming his family, which might explain the blood test, but this is purely speculative. Yet another idea is that he had had some sort of episode of amnesia or had gone into a fugue state, but it so what had caused this and why is it that he would just disappear, with no body ever found? Of course, there is still the idea that this was a fraternity prank gone awry, and that his fraternity brothers might have even accidentally killed him and disposed of the body, but again the fraternity has adamantly denied this and there has never been any evidence to this effect. 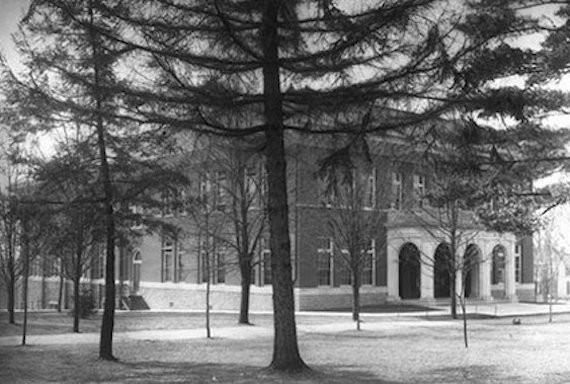 There have also been more fringe ideas about the vanishing that revolve around the supernatural. There is the idea that the ghosts of Fisher Hall had perhaps had something to do with it, perhaps some madness from the years of the sanitarium projecting into him to cause him to do something rash. Also along these lines is one interesting account comes from November of 1953, just a few months after the disappearance. On this evening, residents of Fisher Hall claimed that they had been woken by someone singing outside. When the students went to investigate they allegedly saw a tall, thin figure dressed in white, which some said somewhat resembled the missing Tammen. Some of the hall’s residents supposedly tried to approach the figure, but claim that he retreated with “superhuman speed.” Indeed, over the years the alleged ghost of Tammen has been sighted frequently on campus, and whether this really has anything to do with Tammen or not, it is all definitely spooky.

In 1978, Fisher Hall was demolished, and just to be sure the police had it completely searched, yet no remains were ever found. He has in fact never been seen again, and there have been no new leads at all. One person who thinks she knows the answer is Miami University alumnus Jennifer Wenger, who has spent nearly a decade delving into the case in her own personal investigation. She found that the FBI had disposed of Tammen’s fingerprints in 2002, which is odd in that the agency usually only does this 7 years after a person is proven to be dead, something which has never officially happened with Tammen. This has led Wenger to believe that not only does the FBI know something we don’t, but that Tammen actually died in 1995. So where would he have been for those 42 years that he was missing? Well, according to Wenger, Tammen’s psychology professor was involved in some sort of CIA hypnosis program and recruited him, either willingly or otherwise, after which he worked for the government and then retired, perhaps having his mind wiped and given a new identity. You can read more about Wenger’s research on her blog. Whether you buy any of it or not, it is all very interesting, and adds another layer of intrigue to the case.

Fisher Hall might be gone now, but it has become very firmly linked with the disappearance of Tammen, his vanishing merging with the other dark history of this place and tarnishing and drowning out any other better memories this hall may have once held. What happened to him? Was this a prank gone wrong? Did he run away to leave his life behind? Was he recruited into some sort of CIA mind control program? Or was it the ghosts of this spooky place claiming another victim? In the end, Tammen left that room way back in 1953 and hasn't been seen since, his disappearance no closer to being explained now than it was then.