The Mysterious Wolfman of the Great Dismal Swamp

Sprawled out over a large area of southeastern Virginia and northeastern North Carolina is a tangled mass of wilderness with the rather ominous name of the Great Dismal Swamp. This vast expanse of wetlands encompasses the Great Dismal Swamp National Wildlife Refuge and Dismal State Park, covering tens of thousands of acres, and besides its rich biodiversity the swamp has a long history, being home to Native tribes and also the location of remote settlements for escaped renegade slaves during America’s slavery years. The Great Dismal Swamp is also a place of great mysteries, and the supposed haunt of a very strange and fierce creature indeed.

With its maze of islands and waterways and its dim, murky, and in some places nearly impenetrable wilderness, the Great Dismal Swamp is in many ways every bit as spooky as its name would suggest. Full of snakes and alligators prowling the murky waters, it is an innately dangerous place, often avoided by settlers and a perfect place for the escaped slaves to hide out hidden away from civilization. It is easy to peer into the gloomy, mosquito infested wilderness of this place and imagine that something strange could be hiding here, and indeed there have been tales of weirdness orbiting the swamp for years. Besides numerous tales of ghost lights, shadowy apparitions, and other supernatural denizens, there have also been reports of a large, hairy bipedal beast of some sort lurking here, which has mostly been described as a sort of wolfman.

There were long reports of a giant, 8-foot-tall, hair covered beast that smelled of rotten flesh prowling through the swamp, but the reports seem to have taken off in 1902, when a rather strange report appeared in the March 20, 1901, edition of the Richmond Dispatch, which reads:

The strange Dismal Swamp monster, which one day this week killed seven of Ed. Smith's dogs, ate two of them, and later attacked Mr. Smith himself, has been seen again. Mr. Smith lives about twelve miles from Suffolk. Last night L. Frank Ames, a merchant, who lives near Bennett's Creek, saw the same thing and suffered from its ravages.

Hearing a strange noise, Mr. Ames went out with a pistol. He thought at first it was a strange dog. When he learned it was the much-sought monster Mr. Ames shot several times, but without effect. The thing growled savagely. Being sent after it, six dogs refused to have a conflict and fled in terror. They could not be induced to make an attack. The unknown animal escaped without being harmed. Afterward it appeared at the home of Henry Jordan, colored, and sat defiantly on a covered well. The description is like the one furnished by Mr. Smith- a large, gaunt form, long yellow hair and vicious eyes. 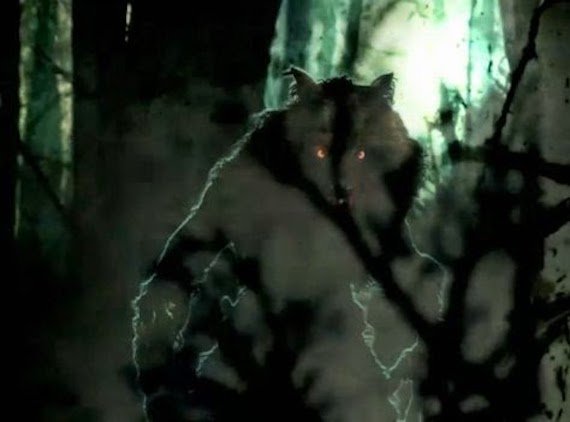 The creature was spotted all over the area after this, usually described as bipedal, with shaggy, matted hair covering its body, and having eyes that glowed brightly. It was often described as having decidedly canine features, and was apparently notorious for killing dogs and livestock, often leaving them in a mangled, savaged state. There were apparently hunters who would go out trying to kill the beast, and were supposedly successful on at least one occasion, but there seems to have been more than one of these things. According to one article of the era in the March 21, 1902 edition of the Little Falls Herald:

Another monster has come forth from the dismal swamp jungles, and is spreading alarm among farmers around Driver, 12 miles from Suffolk, Va. Last week an unclassified animal not indigenous to high lands ter­rorized residents of Pleasant Hill so that they were afraid to leave home at night. After being chased by numerous armed posses this beast was killed by Harrison Walker, a colored hunter.

Now Edward Smith, a farmer of Driver, says that a strange being visited his premises and killed seven dogs, two of which were eaten, while the other five were mutilated. Another dog took refuge under a barn, and Smith, hearing the dog's yells, went out with a pistol. The monster sprang upon him. Smith fell, and the beast tore his clothing to shreds. He finally beat it off, but the revolver, being corroded, would not fire.

Whit Walker, of the same neighborhood, says the animal visited his home, too. From Smith's description the animal is larger than a wolf, with shaggy, yellow hair, long head and sunken eyes. It is gaunt and vicious. People are wondering what will next come from the unexplored swamp made famous by Tom Moore's verses. The more superstitious regard the visitation as supernatural, and families are having much trouble with their servants.

The creature, or something like it, has been sighted in the area sporadically right up into modern times, often with the detail that it stands on its hind legs and has a face like a man, but with a canine snout, which has led to the speculation that the Dismal Swamp Monster could be an actual werewolf. Other ideas are that is could be something like swamp dwelling Bigfoot, some sort of out of place wolf, a bear, or even a type of cryptid known as the Dogman, but it is hard to say, as the reports are few and far between, and mostly known from a handful of old newspaper articles. Whatever this creature is or was, it makes for a very spooky tale from an already spooky place.

Rolling Stones Sing About a Ghost Town, Have Real Encounters With Ghosts and UFOs