Amid all of the coronavirus news it can sometimes be forgotten that there have been many other mysterious afflictions that have plagued us over the years, and some of these remain mostly unexplained. Tucked away in a rugged and remote part of northern Kazakhstan’s Akmola region is the tiny village of Kalachi. With a population of only between 580 and 680 people it is a dusty, rural speck on the map that most people would normally not pay much attention to. Yet beginning from 2013 this isolated village began to fall victim to a mysterious medical condition that would cause sudden stupor and sleep, soon spread to a good portion of the population, and its cause still poorly understood and which has earned this place the nickname “Sleepy Hollow.”

In March of 2013, people in Kalachi, Kazakhstan, began displaying some very bizarre symptoms. They would suddenly, for no apparent reason at all fall sleep, even while walking, talking, doing chores, or otherwise engaged in a period of wakefulness, sometimes for just a few hours, but in other cases for days on end, occasionally for more than a week. These sleep states were more reminiscent of comas than actual normal sleep, with the victim unable to be roused or woken, but in some cases wandering about in some sort of zombie-like trance before going under again. These people usually finally came out of the episode suffering myriad symptoms such as nausea, headaches, dizziness, and in some cases vivid, often terrifying hallucinations, and none of these people would remember a thing, completely unaware of what had happened. One professor Leonid Rikhvanov, of the Tomsk Polytechnic University in Russia explained of the symptoms:

The disease is characterized by the fact that the sick immerse [themselves] in unusually long sleep, while to bring them into full consciousness is practically impossible on the first day. During hospitalization, people exposed to the disease were marked by identical complaints: dizziness, weakness, loss of coordination, unconsciousness or semiconscious state for up to three days. You wake them up, they can speak to you, reply to you, but as soon as you stop talking and ask what bothers them, they just want to sleep, sleep, sleep. After passing the first symptoms, they get headaches, become confused, and suffer emotional instability and memory disorders, which can last up to several weeks. In some cases, hallucinations occur, particularly in children. Some repeatedly fall asleep.

The strange condition seemed to be completely unpredictable and random, striking at any time and affecting people of all ages, sometimes the same person on several occasions. Making it even more bizarre still was that even pets were reported as falling victim to the mysterious illness. The strange sleeping sickness began to spread around, eventually striking down over 150 people and even affecting the neighboring village as well, and through all of this no one had any idea of what was causing it, who was more susceptible, or how it was spread. Even actual sleep specialists had no idea what was going on, and in the absence of any answers, speculation was rampant.

One of the first ideas was that it was caused by bootlegged alcohol, but this was quickly ruled out, as was the idea that it might all be a psychosomatic illness or some kind of mass hysteria. Viral and bacterial tests also ruled out a normal pathogen. Experts then began to suspect that it had something to do with the old Soviet uranium mine in the nearby village of Krasnogorsky, which still had high levels of radiation, but the symptoms were not consistent with radiation sickness, none of the victims showed high levels of radiation, and residences that were tested did not show particularly elevated levels either. The mines were then looked at again, and it was found that it harbored high levels of carbon monoxide leaking to the surface, which would starve the brain of oxygen and explain the odd sleeping symptoms. This has in fact become the official explanation, but many are not so sure. 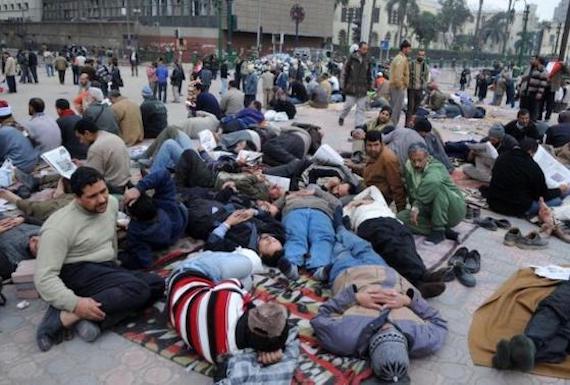 One reason is that the illness seems to hit in recurring waves, affecting a large number of people at once before going dormant again. If it were leaked carbon dioxide, it is reasoned that it would have a more uniform, ongoing effect. There is also the fact that not everyone is affected and the victims seem to be totally random, which does not seem like it would be linked to an environmental issue or gas, which would likely affect everyone relatively equally. It also hasn’t been adequately explained just how so much carbon monoxide would suddenly come belching out all at once to such a degree when the mine had been closed for decades. There is also the fact that people were falling asleep with great rapidity in the middle of doing their daily activities, which would mean that the gas would have to travel a good distance while maintaining its potency and not dissipating at all. Even mining experts have expressed skepticism with the carbon monoxide theory, with one Robert Ferriter, a mine safety specialist at the Colorado School of Mines saying of the idea, “I’m having a hard time with this.” Even more damning still is that blood tests performed on many of the patients showed no signs of carbon monoxide poisoning.

Of course this perceived weakness of the official cause has led to the idea that it is all a part of some government conspiracy and cover-up, but perhaps there is just some other sort of gas or other environmental component at work. In the meantime, there have been efforts to have the residents of Kalachi relocated, but there are many who have refused to leave, and the mysterious sickness continues to resurface from time to time to this day. Although the official consensus has been reached, this is obviously a condition that has not been thoroughly explained, and with all that is going on in the world at the moment it probably never will, as this is a backwater far from where anyone seems to care about. It does show, however, that there are sometimes very mysterious medical conditions that pop up from time to time that manage to confound and compel.