The Sinister Story of an Evil Witch in Maryland

Just outside of Washington D.C., in the United States, is the small, historic sleepy town of Leonardtown, Maryland. Founded in 1660 as Seymour Town, it was once an important port in the colonial days and would be occupied and serve as a Union Naval base during the American Civil War. Nowadays the town is mostly known for its quaint, historic buildings, delicious seafood, and as the county seat of St. Mary’s County, Maryland, indeed it is famous for being the only incorporated town in the county. Yet like with many old New England towns legends and superstitions are abundant here, and one of the most infamous is the story of a sinister witch who is thought to have been an inspiration for the horror film The Blair Witch Project.

In the late 17th century, the quiet town was still sparsely populated and considered a fairly tiny settlement. Everyone knew everyone here, and it was a tightly knit community. As with any community, there were the ones that were deemed to be eccentric, and one of these was supposedly an elderly woman by the name of Moll Dyer. The woman was already a bit of a curiosity, as she was quite reclusive, living out in a hut along a creek on the outskirts of town with her enormous white dog, and only ever seen when she went in to get supplies or beg for alms, or when she went about foraging for herbs in the dim woods. According to the tales she was known for her freakish height, said to tower over the other colonists, and it was also rumored that her shopping list often included various herbs and strange ingredients that no one could figure out the use for. It didn’t help at all that no one was even sure where exactly she came from, with stories ranging from that she was a noblewoman in hiding to a fugitive who had killed her husband, and it was only a matter of time before people began to whisper rumors of her being a witch. 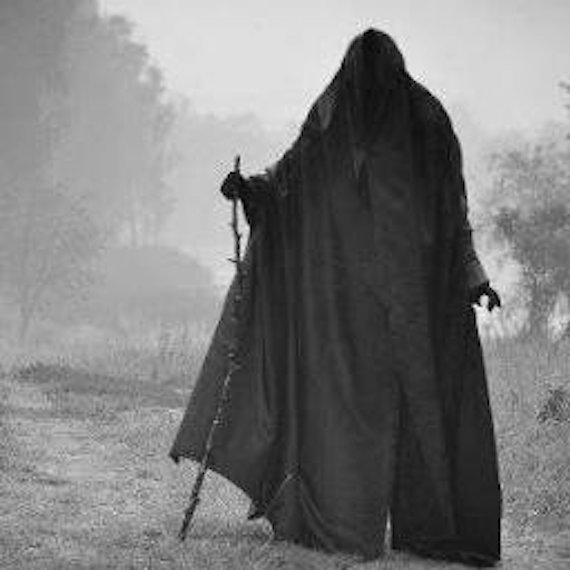 Despite these allegations, the townspeople mostly left her alone, more out of fear than anything else, but one particularly brutal and bitter winter in 1697 would change this. This winter was uncommonly brutal and harsh, leaving in its path a deep suffering amongst the populace, but it was soon noticed that Moll Dyer still made her runs into town, and seemed to be unnaturally well-fed, healthy, and none the worse for wear while everyone else was starving and dying. Combined with the rumors of witchcraft already orbiting her, in the face of all of this it was soon decided that not only was Dyer a witch, but that she had brought this blight down upon the town as punishment for some slight. In response, the townsfolk decided to do something about this perceived evil that was plaguing them.

An unruly mob was gathered, and fueled by anger and superstition they made their way into the woods towards Dyer’s little hut out by the creek. Once there they did not even bother to confront the old woman, simply barring the door and using their torches to light her home on fire to leave it to burn to the ground, but Dyer somehow managed to escape the blaze. She then ran off into the cold winter night, where according to the tale she froze to death while clinging to a large stone. The villagers would find her several days later upon that boulder, one frozen arm outstretched towards the sky, and it was said that her hand had left a print etched into the rock itself. This was seen as a bad portent of things to come, and indeed it was thought that the dying witch had cursed them and was planning to come back for vengeance. Indeed, it is after Dyer’s death that the real legend would start.

After the death of the witch Moll Dyer there would soon be numerous tales of hauntings throughout the area. Her apparition was said to lurk about her charred cabin and there was a ghostly white dog said to join her. Vegetation was said to refuse to grow near the cabin, and it was claimed that lightning would often strike its ruins. Indeed, it was said that many crops in the area were strangely withered, the fields barren, and this was of course blamed on the curse of the witch. The tale also says that everyone who had had a hand in Dyer’s death met with great misfortune and freak accidents, all eventually joining her in the grave. 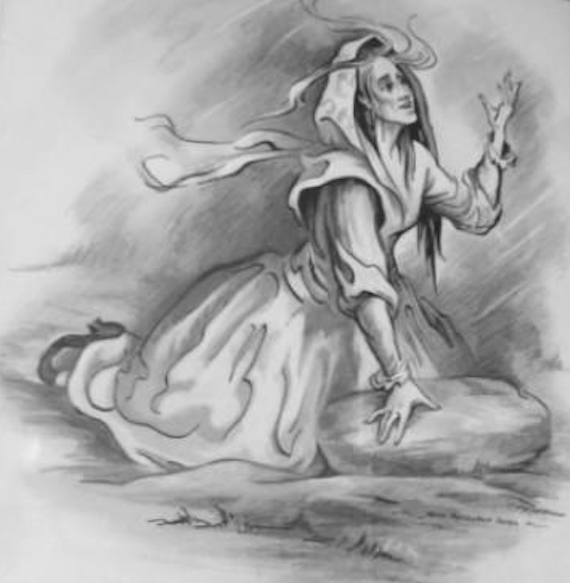 Other than that cabin, many places around the area were soon said to be tainted and haunted by the witch, with strange phenomena continuing on into the present. Of course, there is that boulder, now called “Dyer’s rock,” which still supposedly holds her handprint to this day, and it was and still is said to cause all manner of physical ailments for those who get near it, such as dizziness, nausea, nosebleeds, and headaches. This rock has actually become an object of historic importance, being moved to the Leonardtown courthouse lawn in 1972. There is also the haunted Moll Dyer Road, which is thought to be where the witch’s hut once stood. Along this road have been reported shadow figures, strange apparitions, inexplicable storms that come from nowhere, unexplained car accidents, and even the ghost of Dyer herself, who seems to especially hate men.

The legend of Moll Dyer has become one of Maryland’s most well-known pieces of lore, but it is uncertain just how much of it is based in reality and how much is pure myth. Since records of the era were patchy and incomplete, historians have had a hard time confirming if she ever really did exist, although it is known there were several Dyers in the region at the time. Not helping matters is that most of the stories of the witch were passed down orally, with the first real written account not coming out until the 19th century, when author Joseph F. Morgan collected the accounts and put them to paper. There are no real concrete or verifiable historical records for Moll Dyer, and so she remains as much a specter as ever. Urban legend, myth, or something else? Whatever the case may be, the spooky tale of Moll Dyer lives on.