The Strange Case of John Spear and the God Machine

History is full of strange, enigmatic individuals. They populate the landscape of times past and are often misunderstood specters that we will probably never fully comprehend. Such figures fire debate and speculation, often catapulting to become larger than life in the process, sometimes even becoming inextricably linked to the stories they spawn. One such figure was a man who was a big part of the Spiritualist movement of the 19th century, who claimed to have built a living perpetual motion machine the likes of which humankind has never seen before or since.

Born in Boston, Massachusetts, in the United States in 1804, John Murray Spear starts his story as a prominent clergyman. From an early age he was a minister of the Universalist church in Barnstable Massachusetts, but quickly made a name for himself in other areas as well. In the 1840s he became an outspoken advocate of social reform, in particular focusing on equal rights, the abolition of slavery, prison and labor reform, the removal of the death penalty, and women’s rights. Indeed he became more well-known as a social activist than as a minister, initiating anti-slavery conventions and even overseeing the construction of a section of the Underground Railroad, which was for the purpose of helping slaves escape their masters. He was known for his rousing, impassioned speeches on these issues, hung around with the abolitionist Theodore Parker, and considering the era it is perhaps not surprising that this would make him some enemies. Indeed, it was these enemies who would put him on a different, stranger path in life, for which he would inevitably become more well-known than anything else.

In 1844, Spear was giving an anti-slavery speech in Portland, Maine, when an angry, rabid mob descended on him to ruthlessly beat him to within and inch of his life, leaving him in a coma and incapacitated for months on end. He would finally come out of his comatose state excitedly talking about the various visions and spiritual visitations he had received while under, but at first this was mostly dismissed as mere delirium from his state and injuries. He would continue as a minister, but something was obviously different about him now, and his heart wasn’t in it anymore. He continued to speak of his incredible spiritual experiences while in a coma, and believed that there was some truth out there that he wasn’t privy to anymore, some truth that lie somewhere else other than his faith. This was only made more concrete when in 1851 he claimed that he was receiving messages from his dead father, and he believed that he was able to go into a trance in order to speak to spirits from beyond the veil between life and death.

This all contributed to his turning his back on the church entirely in 1852, when he broke all ties and became involved in the budding Spiritualist movement that was all the rage at the time. This movement was all about contact with the dead through such means as seances, Ouija boards, mediums, and automatic writing, and by all accounts Spear became caught up in it all. He began dabbling with automatic writing, which is when spiritual forces supposedly take control of a person’s hand in order to write out messages, and it was during one such session in 1853 that his life would truly be changed. He said that he had made contact with a group of spirits he called the “Electricizers,” which were part of a group called “The Association of Beneficence.” Spear claimed that the group included some of history’s greatest minds, including Thomas Jefferson and famous scientists such as Emanuel Swedenborg and Benjamin Franklin, and that the purpose of this group was to work from the afterlife to help mankind achieve a new level of technology and awareness. He claimed that he had been chosen as the earthly mouthpiece for this group from beyond death, and in order to further carry out the wishes of these Electricizers, Spear would gather a group of followers to start a creepy commune in Chautauqua County, New York.

Spear would purportedly receive constant messages from the Electricizers for all manner of cutting edge and advanced inventions, which had been thought up by these great thinkers and scientists during their years of death and many of which were ahead of their time. Spear would outline plans for various electrical devices, circular, self sustaining cities, computers, thinking machines, flying ships, and more, but the strangest of all was what he variously referred to as "The New Power Motive," "New Motor," "The New Messiah," "The God Machine," and "God’s last, best gift to man." This machine was to be a device that would essentially serve as a sort of perpetual motion device, which would feasibly create unlimited energy that could forever power mankind’s endeavors for all of eternity. This machine would draw off the power of nature itself and be totally self-perpetuating, perhaps even self replicating, and would serve as a sort of Messiah to bring humankind into the next age of existence and raise their level of spiritual awareness, and as “a grand practical movement for the redemption of the human race.” Spear even went as far as to claim that this machine would serve as the physical body of God on Earth, through which the divine could speak to human beings. It sounds great, but first they had to build it. 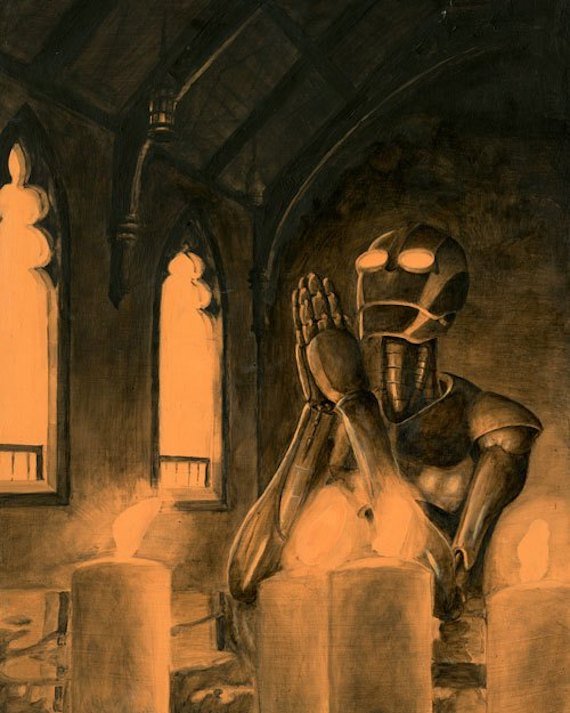 Spear would claim to have gotten detailed plans for the device from his spiritual guides, and it was to be fashioned of copper, zinc and magnets, with meticulous, sophisticated gears, components, and movements, all housed upon a of a black walnut table complete with limbs and a breathing mechanism in a kind of strange approximation of a living being. In 1853 construction began at a humble wooden shed at the top of High Rock Hill, overlooking Lynn, Massachusetts, and took a total of 9 months and an estimated $50,000 in today’s money to complete. As part of the process of building this strange contraption, Spear put himself in a specially made suit encrusted with metal, gemstones, plates and copper strips, and even organized a mock virgin birth through a medium named Mrs. Mettler, who had been groomed to have an “umbilical link” with the machine and was to infuse it all with an actual life of its own. One account at the time says of this:

A Mrs. Mettler had been designated by the spirits as the “Mary of the New Dispensation” and had begun having pains and anxieties associated with pregnancy. Until Spear contacted her, however, she was unsure exactly what she was to conceive. Spear instructed her to go to a mountain near Lynn, Massachusetts by the name of High Rock, on top of which was an awkward looking device made of zinc, copper, and wood. Upon reaching the machine she fell into a trance, went into labor, and after two hours gave “birth” to the machine by infusing her life energy into it. At this point observers swore that the machine moved, ever so slightly, but it had moved. Once again the spirits had displayed their phenomenal power by creating a machine variously called the Art of all Arts, the Science of all Sciences, the New Messiah, the Philosopher’s Stone, the Great Spiritual Revelation of the Age, God’s Last Best Gift to Man.

All of this was looked upon with raised eyebrows even by other spiritualists, not the least of which was a man named Andrew Jackson Davis, who had a high standing in the movement. He began to suspect that Spear was delusional and had somewhat lost his mind, having become more of a cult leader than anything else. Davis would write some scathing commentaries on it all, which earned the derision and skepticism of other spiritualists. Spear and his followers were openly mocked, even as they defended their beliefs and their experiments, conducting their activities in seclusion.

But in the end what everyone is probably wondering right about now is if it really worked. Well, that depends on who you ask. Several witnesses who were there when it was “turned on” say that it did at first move on its own accord, as well as exhibiting a “light pulsatory and vibrational motion.” These movements purportedly went on for some time, usually almost imperceptible, which was attributed by believers as being a result of its weakened infant state and predicted to become stronger and more pronounced over time. However, others were not so impressed, and deemed the whole thing a hoax and a failure. In response to this, Spear and his followers dismantled the machine and moved it to Randolph, New York, where they aimed to reassemble it, but before they could do so it seems an angry mob of people broke into the warehouse where it was being stored and completely destroyed it. After this there were no further efforts to recreate the machine, and indeed Spear would claim in later years that he had been instructed by the Electrizers to abandon the project, as humanity was not ready for it yet. Spear himself would continue on with his social activism and spiritualism and eventually pass away in October of 1887, in the city of Philadelphia.

In the years since there have been conspiracies that the “New Motor” was never actually destroyed by a mob at all, but that Spear and his followers were ultimately successful. One piece of evidence for this has been that there is nothing in the news of the time to corroborate that it was actually destroyed. One opinion is that this was a cover-up by the group itself, and that it was actually taken into secrecy where it proved to be a success, albeit hidden from the world at large. Some even think that it still exists out there to this day. In 2019 it was claimed that the original machine had been fund in a Colorado attic, although this hasn't been proven. In the end there is very little evidence left behind for all of this, no way to know how close Spear ever got to his dream. He remains somewhat of an enigma, yet an integral part of the history of the spiritualist movement, and a completely strange historical oddity.