On the evening of November 21, 1957, businessman Frank Dickenson and two of his friends, Frank Hutton and Fred Taylor, were driving through dark moorland just outside of the tiny town of Silpho, in the Scarborough district of the county of North Yorkshire, England. It was a routine drive, and there wasn’t much to see over those moors, but the monotony was broken by a bright slash of light across the sky, which seemed to come down nearby. The men at first thought is was a meteor that had come down, and went to investigate, but this would be far more bizarre than that. This would begin a weird odyssey of the little UFO that fell to earth, only to disappear and show up in a museum years later

When they got to the place where the glowing object had come down, they could see that this was no meteor, but rather what they described as a "copper-bottomed flying saucer," looking to be out of commission but in relatively one piece considering it had just plummeted from the heavens. The disc measured just 17 inches across and weighed 33 pounds, and although here were no noticeable seams or opening, the whole of it was covered with cryptic symbols that were etched across its side, similar in appearance to Egyptian hieroglyphics. The men knew they had found something strange, and they went about handing it over to some UFO researchers by the names of Frank Dickenson, Anthony Parker and Philip Longbottom. 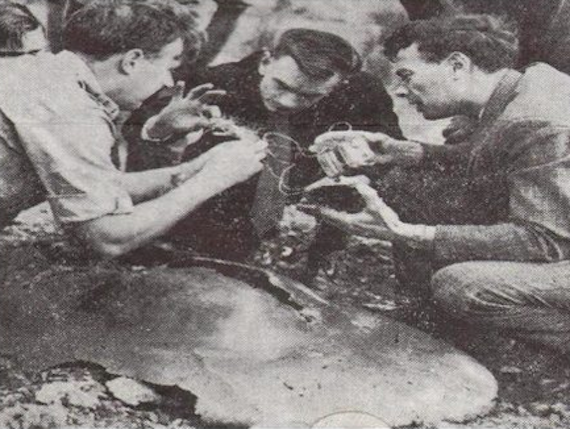 They went about trying to pry it open to see what was inside. They finally succeeded, and allegedly found within the saucer 17 thin copper sheets engraved with more of the same glyphs that were on the outside. Of any occupant there was no sign, leading them to believe it was some sort of unmanned craft for purposes unknown. After this the object was apparently cut into several pieces and sent off to be studied by different institutions, with the findings differing depending on who looked at it. Scientists at the Natural History Museum noted that it did not seem to have ever been in space, as it showed no signs of the extreme temperature changes it would have been subjected to in that environment, leading them to believe that it was terrestrial in origin and likely a hoax. However, Manchester University found that the metal of the object was of an unusually high purity and that its shell had been “radiation-proofed,” and when an Air Chief Marshal Lord Dowding of the Royal Air Force examined it he came away convinced that it definitely had to be of extraterrestrial origins. That seems to be about as far as anyone got at the time, and the various pieces of what is now called the “Silpho UFO” sort of disappeared, being filed away in backrooms to gather dust or just vanishing altogether. After this, the whole incident and this diminutive UFO were just sort of forgotten about.

It would not be until 2018 that an old cigarette tin was found sitting hidden and forgotten in a store room by archivists at London’s Science Museum, containing 5 envelopes with some odd metal fragments and pieces of foil within it, all of it labelled “Victoria and Albert Museum- alleged UFO bits.” The box had been sitting there in the dark collecting dust since 1963, and they realized that this discovery in their collection might have cultural significance. It was turned over to a journalism lecturer at Sheffield Hallam University by the name of Dr. David Clarke, who was at the time giving a lecture on UFOs. Clarke would say of it all:

One of the museum staff tapped me on the shoulder and asked if I was aware that ‘bits of a flying saucer’ had been kept in a cigarette tin for decades. I thought it must be a joke, or the pieces of metal would be worthless. They were stored off-site, so I arranged for the files to be sent to London for examination early in the New Year. I was absolutely amazed when later we opened the tin box and saw the wreckage. It was obvious these were the remains of the missing Silpho Saucer that some have claimed as Britain’s answer to the famous Roswell incident. It’s incredible to hear that pieces of this mystery object have been sitting in a museum archive for more than half a century.

Clarke was able to track the fragments back to an expert on meteorites and explosives by the name of Gordon Claringbull, Keeper of Mineralogy at the Natural History Museum, who had forwarded them the Science Museum in 1963, after which they had just been sort of thrown into storage and swept away. Interestingly, not long after this rediscovery of the lost wreckage, Longbottom one of the ones who allegedly originally pried the UFO open, claimed that he had become obsessed with the meaning of those glyphs, and after intensively studying them for years he claimed to have translated a portion, which he said was written by an alien calling itself “Ullo,” and gave the rather ominous message of “You will improve or disappear,” as well as various passages warning mankind not to tinker with nuclear weapons. This seems as if it surely must be a hoax based off of the reemergence of the Silpho UFO into the news, but it certainly puts a bizarre spin on things.

The object itself is widely believed to have been merely an elaborate hoax enacted by the men who found it, but there are plenty of people who have discussed it in forums and in other articles as being the real deal. Of course, there are also conspiracies that abound, such as that the wreckage found in the museum wasn’t the real UFO or that the findings were covered up. Was it real, and if so what was it? Was this some unmanned probe sent here with a message that only one guy has ever figured out? Or is this perhaps a piece of hoaxing history? This is in the end probably a hoax, but it is still an interesting little piece of UFO lore that seems to have been mostly forgotten. It is pretty amazing that it managed to fade away into the shadows and be buried in a museum's archives for so long, and even if it is not real, it raises the question of if this has ever happened to a real piece of a UFO. Is there maybe some fragment of an alien craft relegated to some dank basement forgotten, just waiting for the right person to stumble on to it? Perhaps time will tell.

Newly Found Exoplanet May Be The Most Similar To Earth