Scientists have discovered the oldest ever fossil of a mammal in the Southern Hemisphere and it’s quite odd to say the least. In fact, the mammal has been nicknamed “crazy beast” which is translated from its actual name of Adalatherium hui.

The researchers actually found the skeleton by accident in 1999 as they were in the northwestern part of Madagascar digging up the remains of a crocodile when they noticed the possum-size mammal fossil beside it. It is believed that the mammal was buried alive by a mudflow.

The skeleton belonged to a group of extinct mammals called Gondwanatherians that once lived with the dinosaurs on the super-continent Gondwana. The mammal fossil was from 66 million years ago during the end of the Cretaceous Period. Since Madagascar had separated from Africa around 88 million years ago, it was already an island when this mammal lived there. 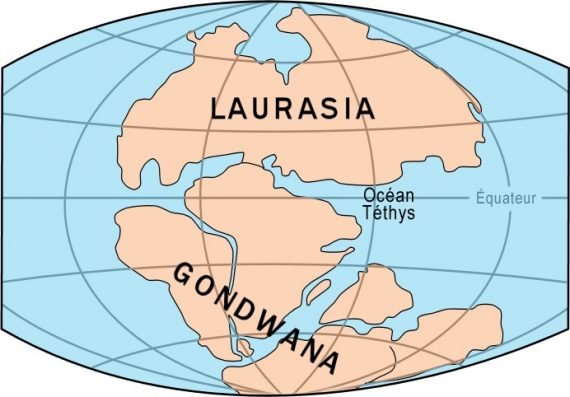 Many unusual animals lived on Madagascar during that time period, including an herbivorous crocodile with a short snout and bumpy teeth; a buck-toothed dinosaur (Masiakasaurus knopfleri), and a “devil frog” (Beelzebufo ampinga) that possibly ate baby dinosaurs.

While the Adalatherium hui may have looked a little bit like a badger, it was nowhere near anything we see on Earth today. The Adalatherium hui weighed approximately 6.8 pounds (3.1 kilograms) which makes it the third-largest mammal that’s ever been discovered from the Southern Hemisphere Mesozoic Era that lasted from around 250 million to 65 million years ago.

Its front legs were aligned perfectly under its body (similar to a dog or cat) but its back legs were sprawled out like a crocodile’s. In fact, its legs were so unusual that researchers are baffled as to how it got around. (Pictures can be seen here.) “It probably means it walked really differently from anything that lived in the past or that is living today,” said Simone Hoffmann who is an anatomist at the New York Institute of Technology as well as the co-researcher of the study (which can be read here).

Its teeth are so unusual that they look as though they came “from outer space”. The ridges and bumps on its teeth are unlike anything they’ve seen before. Additionally, its incisors were similar to a rodent’s but the teeth only had enamel on the cheek side. Based on its teeth, it is believed that the mammal was an herbivore.

As for its skull, it contained several strange holes – not including the openings where the blood vessels and nerves would have passed through to its highly sensitive snout. The additional holes suggest that the mammal had quite a few whiskers that could have potentially helped it while digging in burrows with its strong claws. There was, however, a big hole on the top of its snout which researchers can’t explain as it’s never been found before on any type of mammal skull.

There are no living descendants of any of Madagascar’s Cretaceous Period mammals including the Adalatherium hui which indicates that all of the mammals from that time period died as a result of the end-Cretaceous asteroid that hit.

Elongated Skulls and the Fall of the Roman Empire