A Mystery at Sea: The Strange Vanishing of the Godard Family

Dr. Yves Godard was a well-respected doctor and acupuncturist in the city of Caen, France, but on August 30, 1999 he met his last patients, cleared his schedule for the next day, and then shut down his practice for reasons unknown. On September 1, he took his children, 6-year-old Camille and 4-year-old Marius, out for a day of fishing, and then he drove them to the port of Saint-Malo to board a yacht he had rented, called the Nick. At the time there was nothing particularly suspicious about it, as it just appeared to be a dad out taking his kids for a day of sailing. It would turn out he had even told his neighbor that he was planning a getaway with his family for a few days, so nothing seemed awry at all. Godard told the owner of the boat that he was planning to be gone until September 5, and then he and his children headed out on what would prove to be a fateful journey off the face of the earth.

The next day the Nick was stopped by French officials for a routine inspection, and they found everything to be in order, with one of the children sleeping soundly on the deck. Oddly, Godard told them that his other child and his wife, Marie-France, were below deck, which was strange since his wife was not known to have joined them. One of the customs officers was put off by the doctor’s “unusual” demeanor, and radioed to the owner of the boat, but this turned up nothing suspicious and they were sent on their way. The yacht was then seen sailing along the coast of Brittany for the next three days by numerous witnesses, yet on September 5, the day they were due to return, a strange discovery was made out in the English Channel.

On this day, the French fishing boat the Askara was on its way back to its home port of Roscoff, on the coast of Brittany, when they spotted a small dingy bobbing about in water, aimless and abandoned. It was soon found that the dingy was labelled as belonging to the Nick, and within it held a jacket and doctor Godard’s checkbook. This strange discovery would become more pertinent when the Nick never returned to port, and when September 7 came and went with no sign of the yacht, the authorities got involved. They found Godard’s van parked at the port just as he had left it, but were alarmed when they discovered traces of blood and morphine inside. They tried to contact Godard’s wife, but she was nowhere to be found, and alarms began to go off. They searched the doctor’s home, where they found blood in the living room, bathroom, and master bedroom, yet no sign of any of the family. What had happened here?

Considering that the Nick and the Godard family were all missing, as well as the blood and morphine, police were beginning to suspect foul play. This was supported by the fact that the blood in the van would prove to have belonged to Godard’s wife. It would also turn out that Godard had been having financial and marriage troubles. Indeed, Marie-France had written in her diary that she was unhappy with her marriage, and alluded to a possible affair with her therapist. Looking at all of this, the official theory was that the doctor might have murdered his wife at sea and then fled in the yacht to go start a new life somewhere with his children, but they had no solid evidence for this.

In the meantime, although the Nick and its crew seemed to have vanished into thin air, little clues would begin to emerge in the coming weeks. On September 16 of that year, a life raft from the boat was found off the coast of the Channel Islands of Guernsey and Aurigny, and on September 23 the inflatable raft from the vessel was found on a beach at Dorset, England. The raft was strangely missing its canvas top, which had apparently been cut off, and its emergency inflation device had been removed. Oddly, the French Naval Hydrographic and Oceanographic Service found that it would not have been possible for these objects to have ended up where they were found due to the known currents of the area, and speculated that they must have been intentionally scattered about.

It now seemed as though the family might have been lost at sea, but the strange clues would keep popping up. For one, there were several witnesses who claimed to have sighted the family on the on the Isle of Man after their disappearance, and other sightings would come in from as far away as Scotland, Crete, and even from Florida, in the United States. On January 16, 2000, a fishing boat pulled up in its nets a canvas duffel bag that happened to hold a treasure trove of personal possessions from the missing family, containing their clothes, driver's licenses, insurance documents, check books, Marie-France Godard’s handbag, binoculars and a hammer. Why was it all stuffed in this one bag? No one knew. A more sinister discovery was made several months later, when on June 6, 2000, a sea shell trawler dredged up another strange catch in Saint-Brieuc Bay, off the coast of Erquy, this one being a fragment of a human skull. At the time the fishermen just threw it back into the sea, but then they pulled up a whole human skull, and this time they had no choice but to keep it and contact police, who found that it had belonged to Godard’s daughter, Camille. This was seen as a major breakthrough, and the bottom was scoured for any signs of the missing yacht, but no trace of the boat and no further human remains were found.

February of 2001 would bring still new clues. On the 11th, Godard’s business card was found just lying there on a beach on the Ébihans archipelago, and the same beach would turn up Godard’s bank card on the 22nd of the same month, as well as his credit card just two days later on the 24th. A complete, meticulous search of the entire beach and its surrounding waters was launched, but although one more credit card was found, there was again no trace of the missing yacht or other missing persons. Oddly, it was found that the cards had not been in the water for any appreciable length of time, and so the theory at the time was that Goddard or someone else had been through here and intentionally emptied his wallet, but who or why were unknown. 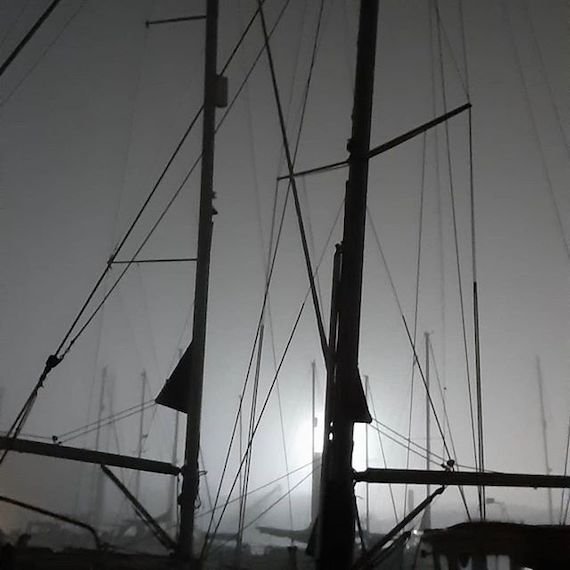 The case went cold until it was heated up again with the February, 2006 discovery of tibia and femur bones on the seabed of Hurd’s Deep, just north of the French coast, which were analyzed and found to have belonged to none other than Dr. Godard himself. That made two of the family accounted for, but the wife and son were never found, and the Nick also remained missing. Other weird clues turned up at around this time as well. In 2007, Police received an anonymous letter saying that Marie-France's body had been dumped in the storeroom of a cemetery near the Godard home, and while human bones were indeed found there, they were found to not have belonged to the missing woman. Then, in 2008, an insurance card belonging to Goddard was found on a beach at Chapelle, and it was strange in that the card was in pristine condition, not showing any evidence of having been left out int the elements for years.

Although the case was officially closed in 2012, and deemed a simple accident at sea, the rest of the Godard Family and the boat they were on have never been seen again and there are questions that remain. Theories as to what happened here run a range. The most popular one is that Goddard did kill his wife, then dumped the body out at sea and then went off into the sunset with his children, only to meet with a tragic accident at sea and sink. Yet how does this explain the mysteries of the life raft, dingy, duffel bag, and the scattered personal effects at that beach that were found long after the disappearance and displaying no sign of having been in the water for long? There is also the idea that the wife did it, or that they met with some sort of foul play, with the perpetrators discarding their belongings afterwards at stealing the yacht, but who? Was it pirates, drug dealers, one of the couple, or even the mafia, as some have suggested? In the end, it remains a mystery that will likely never be solved.