The theaters are still closed and you’ve spent your coronavirus shutdown time binge-watching all of your favorite sci-fi/horror/paranormal/conspiracy shows and movies … twice! Fortunately, a new short film from director Brad Abrahams hits all of those categories in a big-things-come-in-small-packages way. It’s semi-fictional, topical and based loosely on an equally-interesting true story. Let’s take a look at both, starting with the film, “Conspiracy Cruise.”

“First the Macarena, then MKULTRA.”

That’s the teaser line of “Conspiracy Cruise,” starring Henry Zebrowski of “The Wolf of Wall Street” and “The Last Podcast on the Left” fame. Zebrowski plays Gordon Pike, a famous musician who hurts his career by embracing conspiracy theories (sound familiar?) and turns to speaking at conferences to those who believe or want to know more. Unfortunately, the conspiracy cruise of the title is poorly attended and Gordon’s resulting financial gloom, depression and doubts drive him to question what he’s doing. The scene of him alone in his room is a visual statement of what both he and the money-making side of conspiracy exposure has become. With the aid of mini-bar courage, Zebrowski decides to break away, triggering a series of strange, chilling and occasionally horrific events. 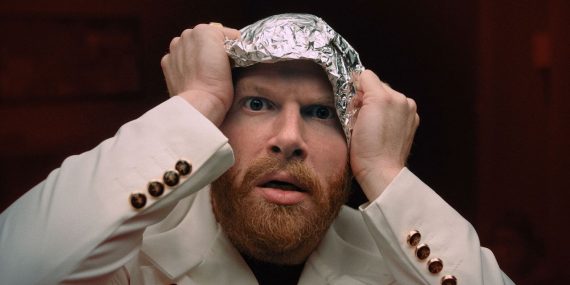 That’s enough of a preview – you can watch it yourself below. Writer and director Brad Abrahams does an excellent job of maintaining the tension throughout and Henry Zebrowski has the skills and the body to pull off the doubts and delusions of Gordon Pike. You may recognize Abraham’s name from “Love and Saucers,” his 2017 documentary film about David Huggins, a septuagenarian alien abductee who claims to have lost his virginity to an extraterrestrial named Crescent and now paints pictures (many NSFW) of the mother of his 60+ hybrid children and other aliens. Abraham chose to make “Conspiracy Cruise” semi-fictional, but it’s loosely based on a real conspiracy cruise

Abrahams says he was inspired by an article about a January 2016 cruise-based conference called Conspira-Sea. Attendee Anna Merlan exposed what happened on and after the cruise in an article published on Jezebel.com. The host (and inspiration for Gordon Pike) was Sean David Morton, a radio talk show host, filmmaker, author, psychic and more. The lineup of speakers and workshop hosts was made up of astrologer, conspiracy theorists, activists and UFO researchers, including Andrew Wakefield, the British gastroenterologist who first claimed a link between the MMR vaccine and autism. All were promoting something besides their theories -- books, consulting, vitamins, etc. In an interview with Wired, attendee Colin McRoberts (a lawyer who blogged about the cruise and later authored a paper entitled “Tinfoil Hats and Powdered Wigs: Thoughts on Pseudolaw”) said the atmosphere was “tense. There was a rumor that one attendee was an undercover agent for the CIA. While that wasn’t true, another government agency played a part in it.

Morton was sued by the Securities Exchange Commission in 2010 and accused of $6 million in securities fraud for soliciting investors to a hedge fund by claiming to have psychic abilities. In 2013, a federal court entered a default judgment against Morton, his wife Melissa, and a company owned by them, the Prophecy Research Institute, for more than $11 million. Morton filed for bankruptcy and in 2015 his home was raided by the IRS. Hours after leaving the boat at the end of the Conspira-Sea Cruise, Morton and his wife were arrested and charged with conspiracy to defraud the U.S by filing false tax returns with the IRS, and by submitting what an indictment calls “fictitious financial instruments” as a means of paying off debt. They were found guilty in April 2017 and sentenced to Federal prison. His wife served her term and Morton is scheduled to be released in 2022.

Without giving away key plot twists or the surprise ending, elements of the real Conspira-Sea can be seen in "Conspiracy Cruise,” and its underlying look at those promoting and profiting from conspiracies is evident to all who follow today’s news. Nonetheless, Brad Abrahams manages to surprise, scare and stun in ways even the real story could not.

Rendlesham Forest Was Not The First Secret Experiment Of Its Kind