An Explorer/Adventurer and One of the Creepiest Creatures of All

Known and feared by those that call the Gobi Desert their home, the Mongolian Death Worm is a beast that has become legendary in monster-hunting circles. At Cryptid Wiki we learn the following: "The Mongolian Death Worm's native name, Olgoi-Khorkhoi, means 'intestine worm', due to its red blood-like color, and size, which is the size of an intestine. It has been described by many to be from 2-7ft long, have the ability to spit out a corrosive yellow saliva and to generate blasts of electricity. However this latter power is thought of as being folkloric by the nomads of the Gobi. Western culture has come to call this monster the 'Mongolian Death Worm.' Mongolian nomads believe the giant worm covers its prey with an acidic substance that turns everything a corroded yellow color." 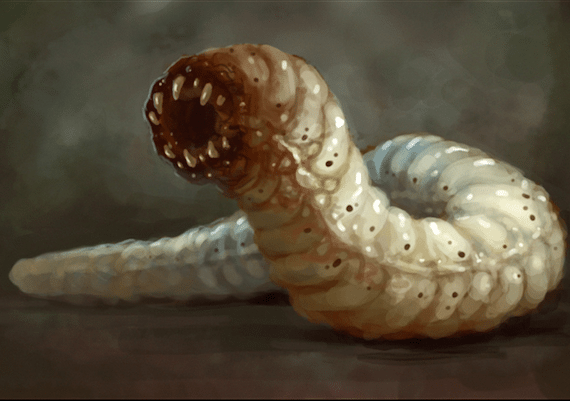 It was not until the mid-1920s that word of this hideous thing reached the west. Prior to that time it was a case of what happens in the Gobi Desert stays in the Gobi Desert. The news that Mongolia was home to one of the most terrifying of all monsters came from Roy Chapman Andrews, who was not only the author of the 1926 book On the Trail of Ancient Man. He was rumored to have been one of the inspirations for one of Hollywood’s most famous characters of the gung-ho kind, Indiana Jones. It should be stressed, however, this has never been definitively confirmed. It was while seeking evidence of the presence of ancient man in Mongolia that Andrews heard some very weird tales about a certain deadly beast that lived below the sands. Skeptoid’s Brian Dunning wrote: “In the summer of 1919, Andrews and his party were in the Mongolian capital, Ulaanbaatar, then called Urga. They were to meet the Premier, the Minister of Foreign Affairs, and other officials in the Mongolian cabinet to finalize the details of their expedition permits." Andrews wrote:

"Then the Premier asked that, if it were possible, I should capture for the Mongolian government a specimen of the allergorhai-horhai. I doubt whether any of my scientific readers can identify this animal. I could, because I had heard of it often. None of those present ever had seen the creature, but they all firmly believed in its existence and described it minutely. It is shaped like a sausage about two feet long, has no head nor legs and is so poisonous that merely to touch it means instant death. It lives in the most desolate parts of the Gobi Desert, whither we were going. To the Mongols it seems to be what the dragon is to the Chinese. The Premier said that, although he had never seen it himself, he knew a man who had and had lived to tell the tale. Then a Cabinet Minister stated that 'the cousin of his late wife's sister' had also seen it. I promised to produce the allergorhai-horhai if we chanced to cross its path, and explained how it could be seized by means of long steel collecting forceps; moreover, I could wear dark glasses, so that the disastrous effects of even looking at so poisonous a creature would be neutralized. The meeting adjourned with the best of feeling; for we had a common interest in capturing the allergorhai-horhai. I was especially happy because now the doors of Outer Mongolia were open to the expedition.

"Ten years later," said Skeptoid’s Brian Dunning, "Andrews co-authored an account of further expeditions in the 1932 book The New Conquest of Central Asia, in which he repeated this brief tale." Andrews stated: "I have never yet found a Mongol who was willing to admit that he had actually seen it himself, although dozens say they know men who have. Moreover, whenever we went to a region which was said to be a favorite habitat of the beast, the Mongols at that particular spot said that it could be found in abundance a few miles away. Were not the belief in its existence so firm and general, I would dismiss it as a myth. I report it here with the hope that future explorers of the Gobi may have better success than we had in running to earth the Allergorhai horhai."

In his book, Andrews said: "This is probably an entirely mythical animal, but it may have some little basis in fact, for every northern Mongol firmly believes in it and gives essentially the same description. It is said to be about two feet long, the body shaped like a sausage, and to have no head or legs; it is so poisonous that even to touch it means instant death. It is reported to live in the most arid, sandy regions of the western Gobi. What reptile could have furnished the basis for the description is a mystery!"