Today, I'm going to address the matter of bridges and their supernatural overtones. Auntyflo says: "Symbolically a bridge can indicate a journey or transition. It can represent stability or conversely, a desire for change. In dreams bridges can represent difficult decisions, compromises or emotional junctions in one’s life. There existed a common belief in most of the ancient times whereas it was believed that if one ever tried to say goodbye while on bridge or while crossing one, that the person would never see them again as it was presumed to mean goodbye forever." Mental Floss state: "In many parts of the world it’s considered unlucky to be the first person to cross a bridge; the idea is that the devil, envious of the human ability to create a construction so complicated, will take the soul of the first living creature to make its way across. Workers sometimes leave money in the plaster of a new bridge to protect it and ensure good luck, perhaps a remnant of a rumored earlier custom involving human sacrifice." 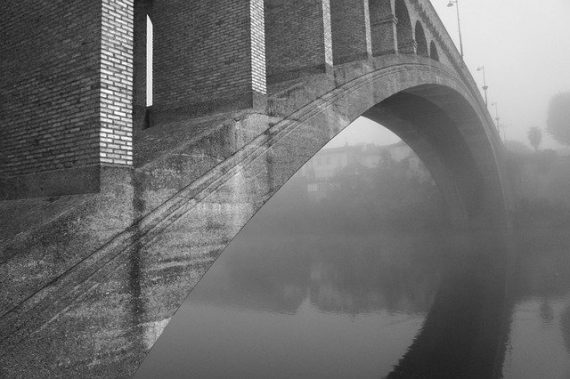 With that said, let's take a look at some strange cases that involve the world of the paranormal and bridges. Bridge 39 on the U.K.'s Shropshire Union Canal is the lair of a spectral, shining-eyed monkey-like animal known as the Man-Monkey. It was first seen in January 1879 and has been seen as late as 2014 (to my knowledge, at least). Whatever the true nature of the area's resident, hairy, monster-man, it shows no signs of leaving its tree-covered haunt anytime soon. Should you, one day, find yourself in the vicinity of Ranton, take great care and heed if you are forced to cross Bridge 39 – the Man-Monkey may be waiting in the wooded wings, ready to strike at a moment's notice.

Now, let's take a look at the Mothman controversy. It all began on November 12, 1966 – as John Keel noted in his book, The Mothman Prophecies. On the night in question, a large, humanoid figure was seen –somewhat appropriately – in the heart of a local graveyard. The witnesses, a group of workmen, described the beast as being brown in color and sporting a pair of large wings. The legend had duly begun. And it had no intention of stopping. Seventy-two hours later, the Mothman was seen again; this time by Steve and Mary Mallette and Roger and Linda Scarberry. At the time, they were driving around an area known locally as the TNT Plant. Its official title, however, was the West Virginia Ordnance Works – today, called the McClintic Wildlife Management Area – a place at which TNT was manufactured and stored during the Second World War. The volatile material was stored in large igloo-like structures that, today, are overgrown by trees and bushes, and which give off a decidedly weird vibe when one walks around them – and particularly so at night. Everything came to an end in December 1967. It was on the night of December 15 that Point Pleasant’s huge Silver Bridge reached breaking point, and plunged into the waters of the Ohio River, killing dozens of people in the process. It is notable that, although Mothman did not vanish after the terrible events of December 15, reports certainly dropped off significantly.

Moving on to Texas, there is the tale of the diabolical Goat-Man that haunts the Old Alton Bridge in the town of Denton. One legend says that, many years ago, wannabe Devil-worshipers in the area inadvertently opened up a portal to some hellish realm that allowed the entity access to our world. And now, today, and as a direct result of this reckless action, the Goat-Man has no intention of returning to the twilight zone from which he surfaced; hence his deep desire to forever haunt Denton’s steel-and-wood bridge.

Rather oddly, there is another U.S.-based bridge with a Denton connection that is also steeped in mystery. This one, however, is located in Michigan. It is one that Raven Meindel - an expert on all-things paranormal - paid a visit to in March 2009 with her daughter, Jessica. Raven takes up the story: "Today Jessica and I took a ride out to the Canton area to do a pre-investigation study of the Denton Road bridge and the surrounding area. There is so much history that lies just beneath the surface of that entire area that we'll have to do many investigations to cover even a portion it. As we drove through where the bridge is located, an eerie ambiance fell over the van. It was like we had just slipped into another dimension of time. With the exception of the newly built condos that now dot the land heavily, and the occasional jogger or bicycle, there is a stillness to the place that can only be described as otherworldly."

Raven continues: "We met a gentleman named Don who has lived there since 1963 and was not only able to give us a first-hand account of the folklore, but also had a wealth of knowledge regarding the development of the area as well. Don told us that the bridge was called 'Knock Knock Bridge' by all the local children when he was growing up, because, as legend has it, if you knocked three times and waited, something spooky was bound to happen. From ghost lights to shadowy dark figures chasing cars, there have always been strange stories passed down from one generation to the next."

In light of all the above, I would suggest the next time you cross over an old bridge, you should be very careful. You know: just in case...